Mamata asserted that politics of polarisation, epitomised by hate speech, will not go unpunished in Bengal 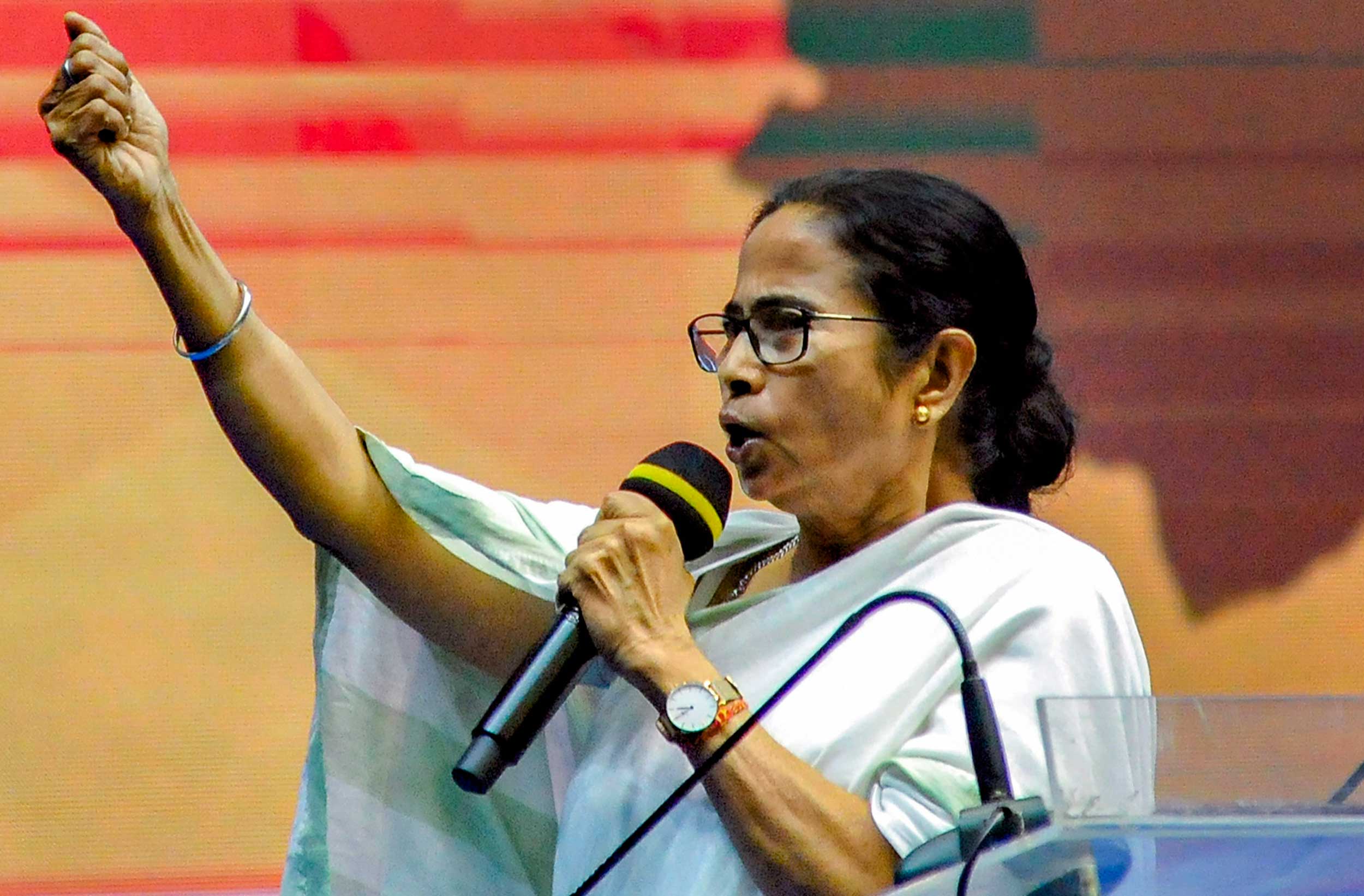 Mamata Banerjee in Calcutta on Monday. “The language that you (the BJP) think works in Delhi will not work in Bengal. This is a different soil. Unlike anything else you have encountered in this nation….,” she said at a party meeting at the Netaji Indoor Stadium.
(PTi)
Our Special Correspondent   |   Calcutta   |   Published 02.03.20, 09:42 PM

Mamata Banerjee on Monday asserted that the politics of polarisation, epitomised by hate speech such as “goli maaro (fire bullets)”, will not go unpunished in Bengal and produced the proof in the form of the arrest of three men for the hate chant that reached the heart of Calcutta on Sunday, when Union minister Amit Shah addressed a rally in the city.

“The language that you (the BJP) think works in Delhi will not work in Bengal. This is a different soil, unlike anything else you have encountered in this nation,” she said at a party meeting at the Netaji Indoor Stadium.

She added: “I noticed yesterday that some people had come from outside, these outsiders shouted “goli maaro”. That language is wrong, it is monstrous. It is a monstrous import. Whoever said that will be sternly dealt with.”

Footage has shown groups of men, some dressed in saffron and waving BJP flags, marching towards the Shahid Minar ground, where the party’s state unit had organised a rally to felicitate Shah on the passage of the amended citizenship law.

“Three arrests were made. Others are being identified. Whoever has any information is welcome to come forward with it…. If we spare one, five more will be generated instantly. This is Bengal, not Delhi, not Uttar Pradesh, not Gujarat,” she added. “The slogan is incendiary, it is inflammatory, it is illegal.”

The three men arrested have been identified as Surendra Tiwari, state executive committee member of the BJP Basti Unnayan Cell, Pankaj Prasad, member of the BJP youth wing in Bhowanipore, and Dhruba Bose, a 71-year-old who is a “hardcore RSS supporter” according to his own family. Tiwari and Prasad have been remanded in police custody for two days while Bose has been granted bail because of his age.

They were part of a larger group that was shouting the slogan “Desh ke gaddaron ko, goli maaro… (Shoot the traitors to the nation)” as they marched along J.L. Nehru Road to the rally ground and were booked for “promoting enmity between different groups on grounds of religion, race, place of birth, residence, language, and doing acts prejudicial to maintenance of harmony”.

“First of all, it is the people, the nation that will decide who the real gaddar is. Who are you? These slogans were part of the planned genocide that took place in Delhi on the Centre’s watch, with the police standing mute spectators,” the Trinamul Congress chief said.

Mamata has since the campaign season for the Delhi Assembly polls been demanding stern measures against the likes of junior Union minister Anurag Thakur, Uttar Pradesh chief minister Yogi Adityanath and other BJP leaders such as Kapil Mishra and Parvesh Verma for fomenting tension through hate speech.

On Monday -– a day after the Congress and the Left were quick to criticise her for not initiating action against the “goli maaro” sloganeering in Calcutta -– Mamata made it clear that Bengal was no Delhi.

“Outsiders are now trying to work in every corner of the state. We must be extremely vigilant…. You must all play your part in this; Didi can’t do it all. Never, however, take the law into your own hands,” she said.

“If the courts can help the people by teaching these goons a much-needed lesson, there will be no greater deed for the people,” she added.

The BJP, however, willy-nilly stood by the slogan.

“Goli maaro… is not a slogan of our party. But what should one say to traitors to the nation?” BJP national secretary Rahul Sinha said.

“It seems the Left and the Congress are her new advisers. As soon as the Left complained, she had the three men arrested. Why can’t the same police act with such alacrity in cases of serious law-and-order violations in this state?” he asked.