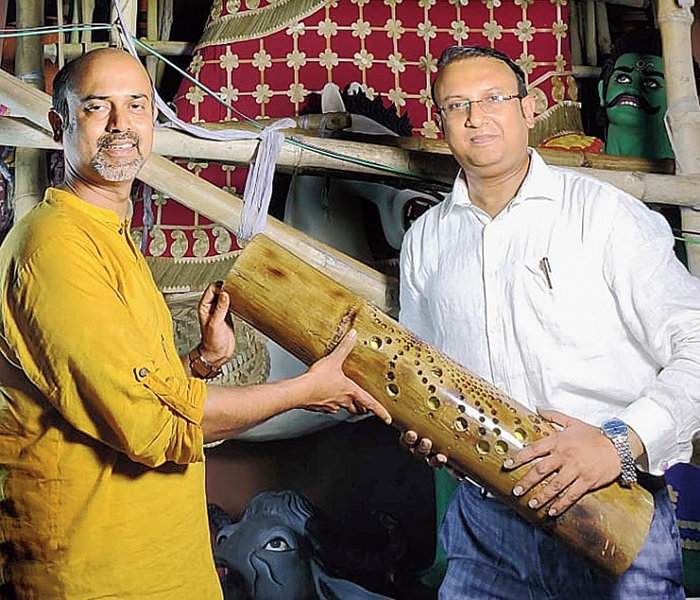 A corner of Ealing Town Hall in London will showcase a slice of Calcutta this Puja. London Sharad Utsav (LSU), one of the most popular Durga pujas in the UK, will recreate some typical areas of Calcutta.

Two community pujas — Ballygunge Cultural Association (BCA) from south Calcutta and Ahiritola Sarbojanin in the north — are helping in the endeavour.

“Our venue has multiple halls. While the puja is held in Nelson Hall on the top floor, the exhibition will be at Victoria Hall on the first floor. The area where food is served will be called Dacres Lane, in a tribute to the famed street food alley,” said Sourav Niyogi, the president of Bengal Heritage Foundation that presents LSU.

Ballygunge Cultural this year is a citadel in bamboo art. “We are using eight types of bamboo from across the country. Duplicates of the accessories of our idol, made of bamboo slices, were sent to London,” said Saptarshi Basu, the puja’s organising secretary.

At Ahiritola, an installation is being modelled on Rani ki Vav, an 11th century stepwell in Patan, Gujarat, that is a Unesco World Heritage Site. “We have dug a 12ftx12ft space and recreated the architecture to the extent possible. Our idol is carved out of a block of sandstone and weighs two tonnes. Since that cannot be replicated, we have sent them pictures,” said Dulal Seal, joint organising secretary.

LSU members Amit Guha and Suranjan Som, who were in Calcutta over the last few weeks, have carried back extra luggage. The last contingent will go with Kaushik Ghosh, LSU’s idol-maker who is flying to London on October 2 with a new face, crown and sari for the goddess and a bamboo lampshade. He has clicked pictures of Dacres Lane and printed a banner with a collage to hang at the LSU food venue. Gurusaday Museum has also sent some cloth products from its restoration project.

Twenty street signs have been created, replicating the yellow ones put up by the Calcutta Municipal Corporation. “We are imagining the entire space as Calcutta and assigning a geographical space to each corner. One corner will have the streetsign ‘Hindusthan Park’, next to which the gifts from Ballygunge Cultural will be showcased. Similarly, the BK Pal Avenue streetsign will have fomex boards with pictures of the Ahiritola pandal and idol.

There are plans to create a Bengali book shelf on “College Street” while the shoe rack corner will be named “Bentinck Street”, one-time hub of Chinese shoe stores. Live exchange of activities such as dhaker lorai and dhunuchi naach might take place between the London and Calcutta pujas.

“The exhibition will create curiosity in our next generation so they might want to visit Puja in Calcutta some day,” said LSU president Anirban Mukhopadhyay.