Friends in need: Parsis care for their elderly 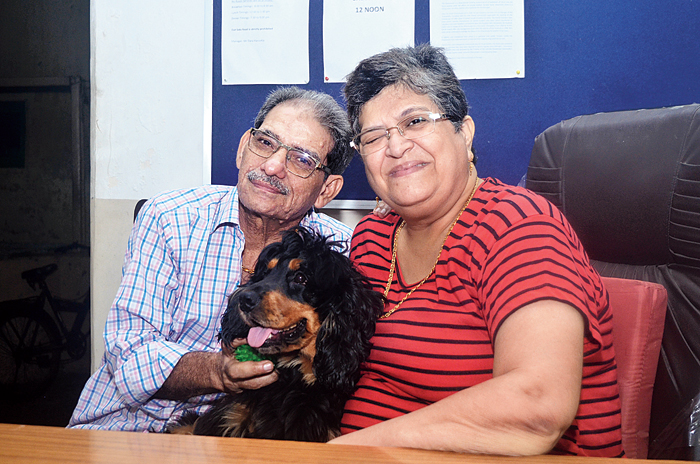 Dara and Meher Hansotia who manage the dharamshala and its kitchen
Pictures by Biswajit Kundu
Arundhati Bhattacharya   |   Calcutta   |   Published 12.09.19, 08:32 PM

When Ava Mehta flew down from England to visit her parents in the city during Navroz last month, her mother Tina Mehta hosted a tea party for her to meet the people who look after the octogenarian couple when she is away.

A group of caregivers headed by Sam Medora, the former CEO of the Calcutta Zoroastrian Community’s Religious & Charity Fund, has been looking after elderly Parsis in Calcutta for nearly two decades. From helping them on their hospital visits and check-ups to taking care of salon appointments or even an occasional visit to the movies, the caregivers do everything for the senior citizens, most of who live alone.

The corridor overlooking the rooms of Parsi Dharamshala, home to some elderly members of the community
Pictures by Biswajit Kundu

The city at present has just over 400 Parsis, according to a survey conducted on March 31, 2019. “We conduct surveys twice a year and according to the latest one there are 405 Parsis in Calcutta, 150 of them over the age of 70 and 238 over the age of 60,” said Noshir S. Wadia, CEO of the Zoroastrian charity fund.

The trust has seven caregivers at present who look after 20 elderly members of the community, aged 60 to 96.

The caregivers are always on the alert, responding to every phone call and rushing to the aid of the elderly at all times. They pay monthly visits to the homes of the elderly to ensure that things are running smoothly in the household.

Not just during emergencies, the caregivers also meet the elderly for lunch or to just spend time with them. It is a free service and a few of the elderly also receive financial assistance from the trust.

The Mehtas strongly recommend Calcutta as the perfect city for an ageing Parsi to live in. “Our children, settled outside the city, can live peacefully as they know we are looked after well,” Tina said .

The trust or members of the community also organise group outings and sponsored trips to clubs or restaurants for the elderly. “We celebrate Elders’ Day where we have pick-up and drop facilities for senior citizens. The trust has also lent us a car for hospital and other duties,” Medora said.

The elderly care service was initiated in 2001. “In 2004-05, we built a team to take care of the elderly and lonely,” Medora said. The caregivers receive a stipend from the trust.

(From left) Caregivers celebrate the birthday of an elderly person; help while shopping and at a tea party organised by (seated, left) Tina Mehta at her home
Pictures by Biswajit Kundu

The Manackjee Rustomjee Parsi Dharamshala on Bow Street is also involved in the endeavour, providing a home to some of the elderly. The building is more than a century old and over the years has been serving not just travellers but also doubled as a resting place for recuperating patients. It is now a home to a few from the community.

If needed, the community trust also bears the expenses of the elderly people living at the dharamshala.

Pilloo Sutaria and Shirin Bhattacharya have been living at the dharamshala for the past five years, while Zarine Katrak and Roshan Singh have moved in recently.

Sutaria, 78, was herself a caregiver for elderly Parsis after she retired as a stenographer at Tata Iron and Steel Company, where she had served for 41 years.

Now, Sutaria is looked after by caregivers like Navaz Gherda and Katy Sabawalla, among others. “We are glad to be able to pay back to her by taking care of her,” Gherda said.

In charge of the dharamshala are Dara and Meher Hansotia. “If somebody falls ill or there is an emergency, the first initiative comes from us, after which the caregivers are alerted,” Meher said.

The couple also look after the dharamshala kitchen. “Every day there is a change in the menu for the elderly residents,” said Dara, the manager of the dharamshala.

The kitchen offers a home delivery service as well. “We cater to around six to eight families from the community at present. We deliver lunch and dinner at their doorstep,” said Dara, who also runs Meher Caterers, that serves authentic Parsi delicacies at community dinners and kitty parties.