Fresh test for ‘Siliguri model’ ahead of civic polls 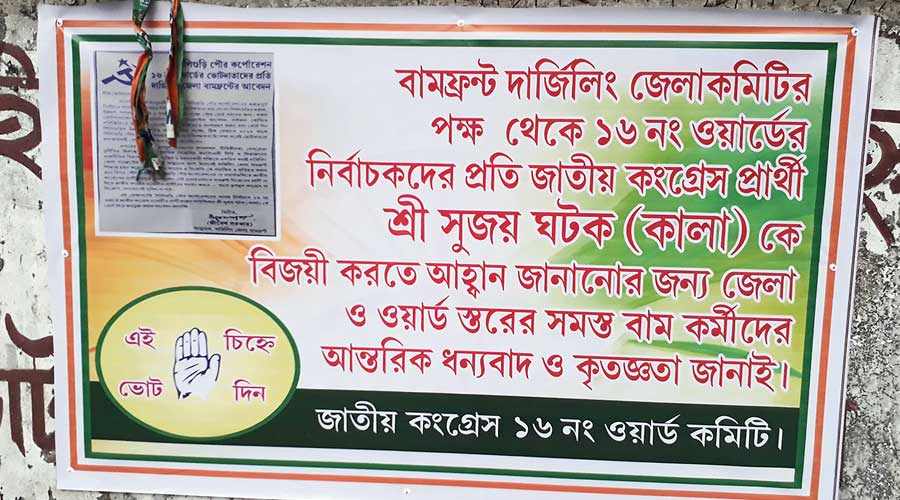 The “Siliguri model” is back ahead of the Siliguri Municipal Corporation (SMC) polls which will be held on February 12, and this time in a more “formal’ manner.

For the first time in recent years, the Darjeeling district Left Front has come up with a leaflet and is distributing it among voters of two of four municipal wards of the city, seeking support for the Congress candidates.

The Congress, on the other hand, has abstained from pitting candidates in 13 such wards which the Left had won then.

“We want to thwart Trinamul and BJP from securing a majority at the civic body here. That is why we are urging the voters to vote for the Congress candidate in these wards. We are circulating a leaflet with this appeal so that no other candidate wins from these seats,” said Jibesh Sarkar, the convener of Darjeeling district Left Front, in whose name the leaflet has been published.

Such a move by the Left has led to repercussions in the political arena of the city. Senior political leaders have mentioned that since 2009, people have got acquainted with the term “Siliguri model” when the Left got into a tacit understanding with Congress and backed Congress’ mayoral candidate and could stop Trinamul from securing the civic board.

“The Left and the Congress had also contested with a tacit understanding at the three-tier panchayat elections of Siliguri sub-division which was also held in 2015. But this time, it seems that the model is more formal as the Left are openly supporting Congress in these seats even though no such alliance has been stitched among these political forces at the state level,” pointed a political observer.

This year, there are altogether 201 candidates in the poll fray. The total number of voters in the 47-ward civic area is 4,02,897.

The understanding among the Left and Congress, followed by the Left’s move to reach out to people seeking support for Congress candidates, have also made Trinamul to react.

“Time and again, we have highlighted this tacit understanding among these two parties and now, the BJP is also with them. This is an understanding for political interests and would not do any good for Siliguri residents. People here have witnessed how the past civic boards have failed to provide even the basic civic amenities to them,” said Alok Chakraborty, the chairman of Darjeeling (plains) district Trinamul committee.