A large team of Barrackpore police commissionerate, along with personnel of bomb squad, forensic experts, sniffer dog squad, and CID officials launched a combing drive in the area 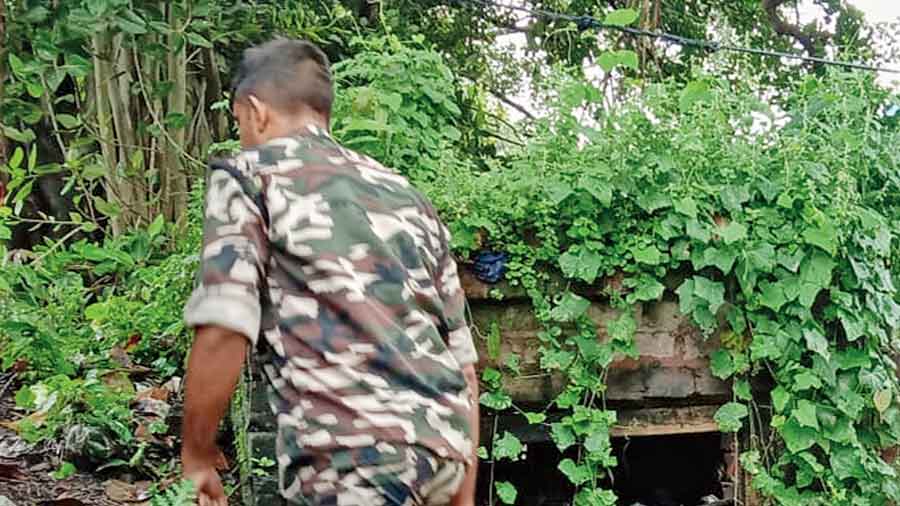 A policeman searches a bush near Arjun Singh’s residence at Jagaddal on Tuesday.
Tapas Karmakar
Subhasish Chaudhuri   |   Kalyani   |   Published 15.09.21, 01:51 AM

Unidentified goons allegedly hurled a bomb near Barrackpore BJP MP Arjun Singh’s residence at Jagaddal in North 24-Parganas on Tuesday morning, barely 24 hours after the Union ministry of home affairs had ordered an NIA probe into a similar incident five days ago.

Although police rejected claims of the bomb attack, the incident prompted them to launch a raid during which at least three crude bombs were recovered from a house close to the MP’s. A large team of Barrackpore police commissionerate, along with personnel of bomb squad, forensic experts, sniffer dog squad, and CID officials launched a combing drive in the area.

Arjun and BJP sources claimed that around 9am, a powerful bomb had exploded in a bush barely 50 meters from the MP’s house Majdoor Bhawan, located near Meghna more in Jagaddal, unleashing fresh panic among his family members and people living in adjacent areas.

While Arjun said goons backed by the Trinamul Congress had hurled the bomb to kill him, the police rejected the claim. Police officers examined the blast site and said a crude bomb hidden in a bush behind the MP’s residence went off on Tuesday morning.

Arjun said: “A group of goons close to a ruling party MLA and involved in a theft racket are hurling bombs to kill me. But I am not afraid”.

DC (North) Barrackpore commissionerate Shrihari Pandey refused to speak in detail. “An incident occurred. There was a blast and smoke.... A team of experts is investigating it. Nothing can be said until it completes the job and submits report,” he told reporters.

“People have realised that the police have no control over the law and order situation here and goons enjoying free run here,” he told the reporters.

Jagaddal Trinamul MLA Somnath Shyam, however, refuted the allegations and accused the MP of staging a fake drama.