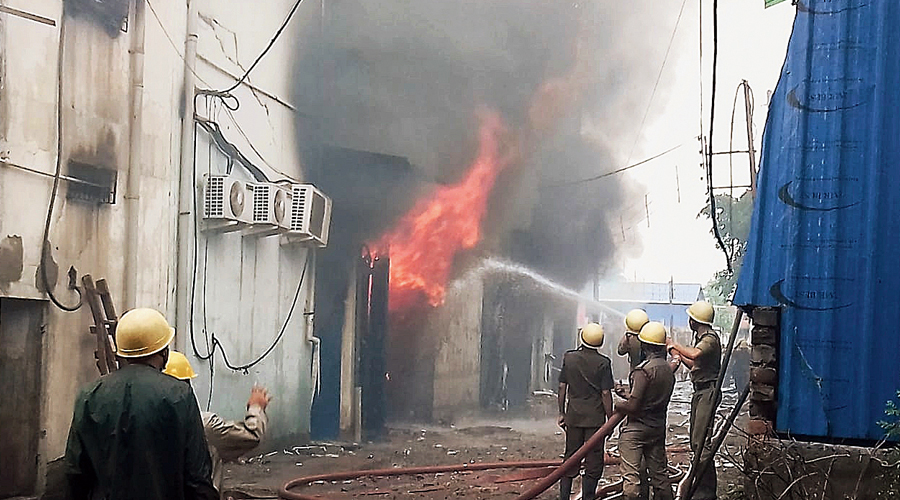 At least four employees were feared dead in a fire at a vest manufacturing unit that was reportedly full of combustible items like petroleum gas cylinders in New Barrackpore early on Thursday morning.

The unit is located on the first floor of a three-storied building in the Bilkanda-Sajirhat area in North 24-Parganas.

The blaze, which also engulfed the godown of a prominent medicine retail chain housed on the ground floor, could not be brought under control till late on Thursday evening and the four employees reported trapped in the factory were yet to be traced. Police have begun a case against the factory owner who couldn’t be traced.

The fire department engaged 14 fire tenders and two robot firefighters to douse the blaze at the factory which was reportedly full of inflammable items.

Fire officials could not immediately ascertain the reason behind the blaze, but claimed that the bulk stock of inflammable items like petroleum gas cylinders, petroleum-based products and ethanol-based sanitisers as well as raw materials for vests made the task difficult.

Local residents and businessmen have said the Bilkandi area has around 100 small industrial enterprises and factories, whose fire safety systems do not match prescribed protocols.

Sources said the fire on Thursday had first broken out inside the factory at 3am when production was going on in violation of government restrictions. They said at least four workers of the factory were working inside then. However, none, including assistant manager Subrata Ghosh, could be traced as of Thursday evening.

Local residents called the fire brigade which pressed six engines onto the job and later had to reinforce the operation with eight more tenders.

Fire officials and the local panchayat pradhan alleged that the operation was delayed as security personnel of the company did not allow them to enter. “The fire fighters arrived in time. But, it was two hours before they could begin work by which time the fire had spread beyond control”, alleged Chittaranjan Mandal, pradhan of the Bilkanda panchayat

An official of the state fire service department said “The fire spread so fast and went out of control beyond our imagination. There were heaps of inflammable materials and gas cylinders which exploded one by one, making the situation dangerous”.

“The fire spread across an area of around 50,000 square feet. The size of the fire was larger than we apprehended. I heard that work was going on inside late at night, which is being examined, and an effort is being made to trace persons who were inside the factory, said Bose.

Hearing about the news of the fire, family members of the four workers gathered in front of the blazing factory breaking down in tears.

A relative of Tanmoy Ghosh, one of the untraced workers, said, “I talked to him last night when he said he was busy on duty. Early in the morning today we came to know about the fire and called his number. But his mobile phone could not be reached. I tried the number of other colleagues who were with him. But their phones also did not ring”.