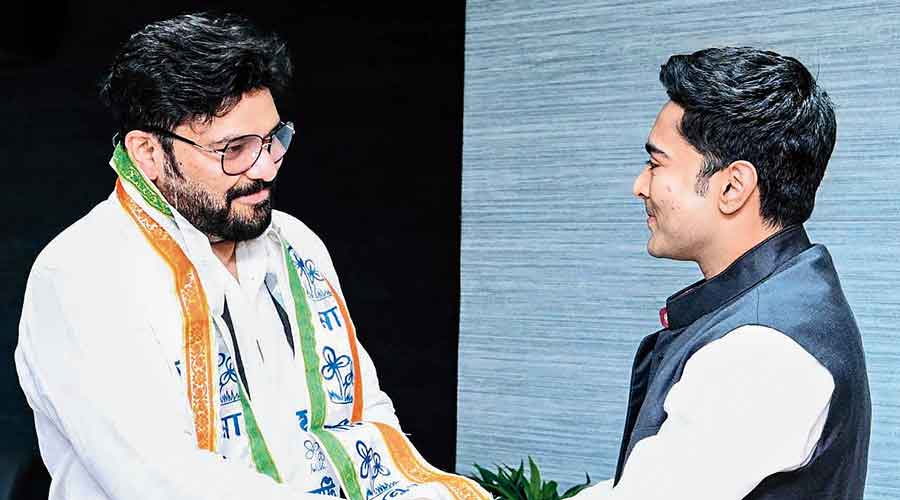 Supriyo is the first MP and fifth BJP lawmaker — after MLAs Mukul Roy, Tanmoy Ghosh, Biswajit Das and Soumen Roy — to have joined Trinamul in the past four months since the saffron camp’s Assembly poll setback.

A two-time MP and minister known for his proximity with the BJP’s central leadership, Supriyo had been sulking since the July shuffle in which he was dropped as junior environment minister.

He had earlier offered to resign as an MP, a decision he changed later, and announced his plan to quit politics.

Once a bitter critic of the Trinamul regime, especially Mamata Banerjee and her nephew Abhishek — Supriyo had also publicly announced that he would not join any other political party. 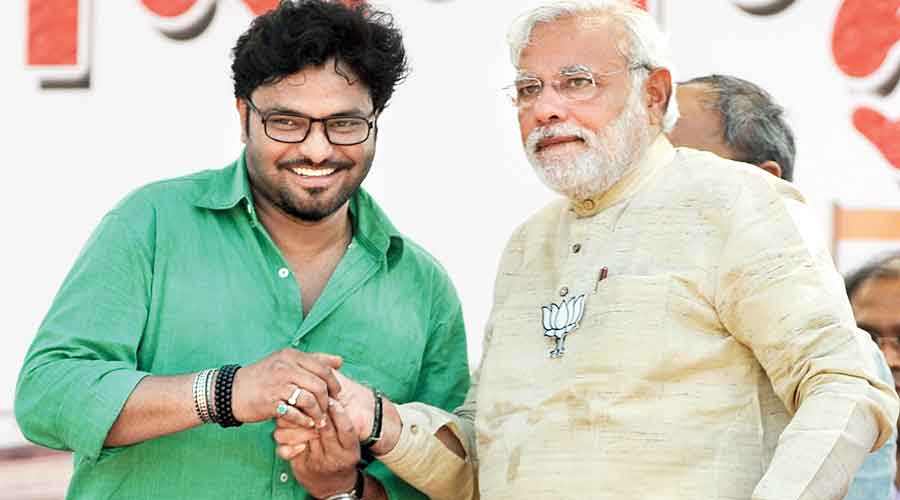 Babul Supriyo with Narendra Modi in Asansol in May 2014 during the general election.
PTI photo

On Saturday, Supriyo tried his best to justify his decision to make a U-turn and hold the Trinamul flag. Speaking at a brief news conference after his induction, he said that the “opportunity” to join Trinamul and work for the people of Bengal suddenly came his way, “just four days back”.

“When I said I’d quit politics I meant it from my heart. However, I believe a huge responsibility to serve the people of Bengal is being entrusted upon me (by Trinamul).… This happened over a matter of four days when I had called up Derek (O’Brien) over my daughter’s admission. Then I spoke to Didi and Abhishek. I’m proud to have changed my decision...,” Supriyo said.

He added that his family and friends had already been asking him to reconsider his decision of bidding goodbye to politics.

Asked if he would quit as Asansol MP, he suggested that he would. “Obviously!” he said. “Since I’ve joined Trinamul there is no point in holding the Asansol seat.… I’ve come to politics because of Asansol and I’ll do whatever I can for them.…”

Asked whether he would be sent to the Rajya Sabha, Supriyo deflected the question to Derek, who helped him dodge a barrage of questions that flew thick and fast at him. Supriyo is scheduled to hold another news conference on Sunday.

Trinamul sources said Supriyo might be asked to campaign for Mamata in the Bhowanipore constituency for the upcoming bypoll. If this happens, the irony would be striking as Supriyo had on September 10 congratulated Priyanka Tibrewal for being picked as the BJP’s candidate for the contest against Mamata.

Supriyo was also named by the party as one of the star campaigners for Tibrewal. However, he had rejected outright such a possibility as he had “quit” politics.

Although most leaders of the BJP’s Bengal unit had been unhappy with Supriyo for the past few years, they said his exit was an embarrassment in the short run while the party would gain in the longer run.

Dilip Ghosh, the state BJP chief, said: “He was never a party worker. He used the party to be an MP and a minister.… For eight months during Covid-19, he sat in Delhi and never cared for the workers here.… Neither did he ever stand by the people, who were facing attacks by Trinamul goons after the Assembly polls,” Ghosh told The Telegraph.

Ghosh, who always had differences with Supriyo, used the opportunity to express his displeasure with the central leadership. “I’ve been proved right about a lot of people.… Same goes for him. We have expressed our discontent with these leaders to our central leadership time and again, but nobody listens.”

The BJP’s Asansol organisational district vice-president, Subrata Mishra, said Supriyo’s departure would only help the party to get stronger in the area because “nobody liked him”.

Trinamul state secretary and spokesperson Kunal Ghosh has said that while Supriyo joined on Saturday, several others were waiting to switch to the party as they were unhappy with the BJP leadership.