The department planted around 2,000 saplings of various species, including medicinal plants, on the vacant plot 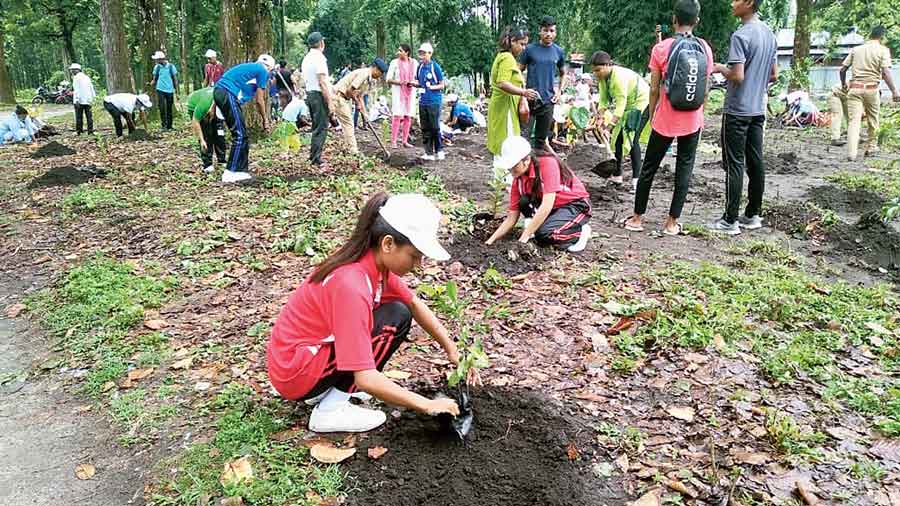 Students plant saplings at the plot recovered by the state forest department in Kholachandfafri on Wednesday.
Passang Yolmo
Our Correspondent   |   Siliguri   |   Published 21.07.22, 01:28 AM

The state forest department has taken up the task to recover parcels of its land that has been encroached various parts of north Bengal.

On Wednesday, the Baikunthapur forest division of the department took control of one such illegally occupied plot at Kholachandfafri area under Dabgram-1 panchayat of Rajganj block in Jalpaiguri.“Around one-and-a-half hectares of our department was grabbed by some unauthorised occupants. We managed to regain control of the land and undertook a plantation drive on it. It has been decided that encroachment of even a single patch of land owned by the department will not be allowed. Our officers have been accordingly briefed across north Bengal,” said Ujjwal Ghosh, the additional principal conservator of forests (north).Foresters, along with representatives of NGOs, school students and nature lovers, reached the plot on the banks of the Sahu river, and around 7km from here.

“In past two-three years, some people had encroached upon the plot and raised shanties and temporary structures. We involved local residents and students of local schools in the anti-encroachment drive to clear the space,” a forest officer said.The department planted around 2,000 saplings of various species, including medicinal plants, on the vacant plot.

“These plants would reduce carbon emission in the area and prevent further encroachment in future,” said Animesh Bose, the coordinator of Siliguri-based Himalayan Nature and Adventure Foundation, one of the outfits involved in the drive.Over the past couple of months, civil and police administrations in the north Bengal districts are clearing illegal encroachments from government and private land.“Like the administration, state departments, including forest, own land. Our department has taken up the initiative to regain control of all encroached land,” said a forest officer, adding that with Wednesday’s development, the department recovered around 18 hectares in north Bengal in recent weeks.