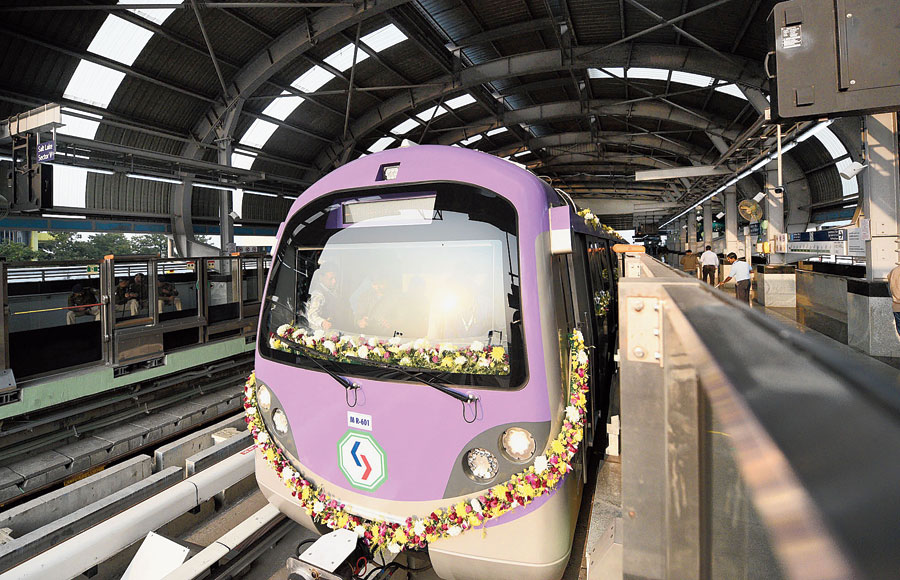 A 5.3km stretch of East-West Metro, between Sector V and Salt Lake stadium, was inaugurated on Thursday evening.

Railways minister Piyush Goyal, who unveiled the stretch, said the rest of the 16.5km corridor, stretching between Sector V and Howrah Maidan, would be thrown open in two years.

Commercial operations between Sector V and the stadium will start at 8am on Friday.

Goyal said the Phoolbagan station, which is immediately after the stadium, would be opened in “three to four months”.

“In the next three to four months, the stretch till Phoolbagan will become operational. We hope the entire length, till Howrah Maidan, will be opened in another two years if we get local support to clear the bottlenecks,” the minister said.

Once fully functional, East-West Metro trains will run under the Hooghly river.

The six stations in the first phase of the project that will be operational on Friday morning are Salt Lake Sector V, Karunamoyee, Central Park, City Centre, Bengal Chemical and Salt Lake Stadium.

An official of Metro Railway, which will run the service, said 74 trains would run between Mondays and Saturdays. The first trains in either direction will start at 8am and the last at 8pm.

On Sundays, the train count will come down to 50. The first trains will start at noon and the last at 8pm.

The first phase will have a two-tier fare structure — Rs 5 for up to 2km and Rs 10 for between 2km and 5km. “If someone boards a train at Sector V and gets off at the stadium, he or she has to pay Rs 10,” an official said.

Though the stretch that has been inaugurated is 5.3km long, the commute distance is 4.88km.

Goyal said the other four Metro lines in Calcutta had some issues.

“There are some issues of land acquisition and encroachment. The state government’s help will be needed and I hope we will get their cooperation,” the minister said.

The Trinamul Congress boycotted the programme because chief minister Mamata Banerjee’s name was omitted from the advertisement released by the railways.

Local elected representatives of Trinamul — Barasat MP Kakoli Ghosh Dastidar, fire and emergency services minister and Bidhannagar MLA Sujit Bose and Bidhannagar mayor Krishna Chakraborty — were invited but they did not show up.

“The project was Didi’s brainchild. She sanctioned money repeatedly during her tenure as railway minister.... She is the chief minister now, yet she was left out. We stayed away in protest,” said Ghosh Dastidar.

A Metro official said they “followed the protocol” in sending invites. “We got to know on Tuesday that the inauguration was on Thursday. The printed invitation cards came on Wednesday and we went to Nabanna to give one to the chief minister.”