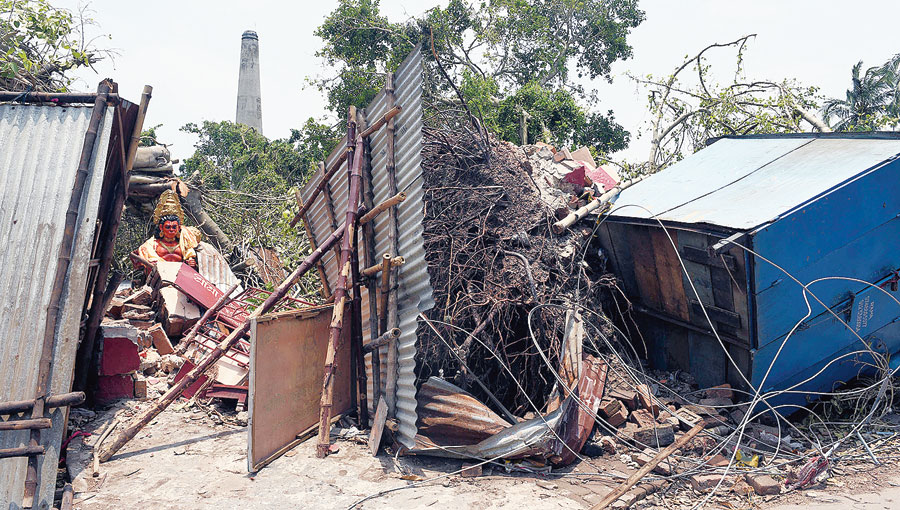 District officials in East Midnapore’s Contai have lodged FIRs against at least two persons who had not responded to repeated notices issued since June asking them to return wrongfully received Amphan doles of Rs 20,000 each.

The two are among a list of 500 persons, identified by block and district officials in East Midnapore’s 25 blocks and five municipalities in June, who had wrongfully received the doles meant for those whose homes had been ravaged by Cyclone Amphan that lashed Bengal on May 20.

The district administration had carried out the verification drive to identify those who had wrongfully claimed the dole shortly after the ruling Trinamul Congress came under scrutiny for alleged widespread corruption at the panchayat and block levels.

The widespread Opposition-led protests that had erupted in the Amphan-hit belt in the state over irregularities in the distribution of the state government dole had made chief minister Mamata Banerjee order the administration to fix the anomalies and take action against those who had indulged in corrupt practices.

Following the chief minister’s intervention, fresh lists of beneficiaries were drawn up and those who had wrongfully claimed the compensation were identified through a massive verification drive.

As the administration began to crack the whip, several people who had taken money illegally did turn up to refund the dole

Many, however, refused to give in. This prompted the administration to take recourse to legal action.

“We have identified 33 persons in Contai town who haven’t returned the money despite repeated reminders. We have lodged FIRs against two of them, while the bank accounts of others have been sealed,” said Contai SDO Subhamoy Bhattacharya and added that legal action would be taken against everyone involved with Amphan corruption.

Sources said the SDO’s move came in the wake of district magistrate Partha Ghosh’s direction to all block officials to act strongly against violators of the dole scheme. Sources added more comprehensive lists of existing violators were still being prepared.

The administration’s step is in stark contrast to the state of affairs even two months ago when the BDO in Haldia’s Sutahata, Sanjay Sikdar, was allegedly transferred for filing an FIR against a Trinamul-run panchayat’s pradhan in the district. ‘

The BDO had accused of corruption Ashadtalia panchayat pradhan Shibani Bakuli, who claimed in July that the party intervened to put the probe against her on hold.

Opposition leaders this week said district officials' initiative was “too little too late”.

“Even though it is minimal, we welcome the administration’s action against the corrupt. It is the result of our widespread protests," said BJP district vice-president Pralay Pal.