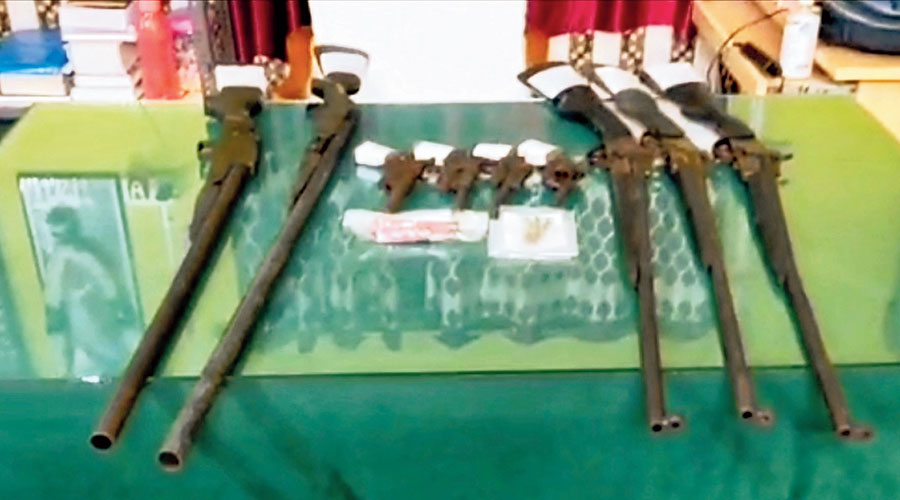 The Sunderbans coastal police seized a huge cache of firearms from a house in Radhanagar area of the Baruipur police district, South 24-Parganas, in the early hours of Wednesday.

Police have also arrested two persons in connection with the illegal stockpiling of arms in the house. The duo were apparently waiting to hand over the consignment to members of a suspected arms racket active in the area.

Though senior police officers of the Baruipur police district refused to disclose the exact details of the recovered arms, an officer of the coastal police station said the haul include five long-range guns, three one-shooters, at least nine pistols and various types of ammunitions.

Sources said that acting on tip-off, a team of the coastal police station searched the house one Muchhakali Mollah in South 24-Parganas’ Radhanagar village early on Wednesday and seized the arms.

“We had information that the house had a huge stockpile of arms and ammunition waiting to be supplied to members of an arms racket. The house owner had been under scanner for a long time for his suspected activities. During the raid we found the cache of arms and nabbed Muchhakali Mollah along with one of his close aides. They are being interrogated,” a police officer said.

An investigating officer said it was not yet clear if the arms were being readied for sale to the racket or would have been handed over for use in subversive activities. A case against Muchhakali and his aide was filed under the Arms Act, he added.

The police began a combing operation in the area suspecting there could be a stockpile of more such arms. However, till Wednesday evening no further recovery of arms was reported, said an official of the Baruipur police district.