What do we gain by conceding ground to the Trinamul, asks district chief Pradip Prasad about 'abdicating' Bhowanipore 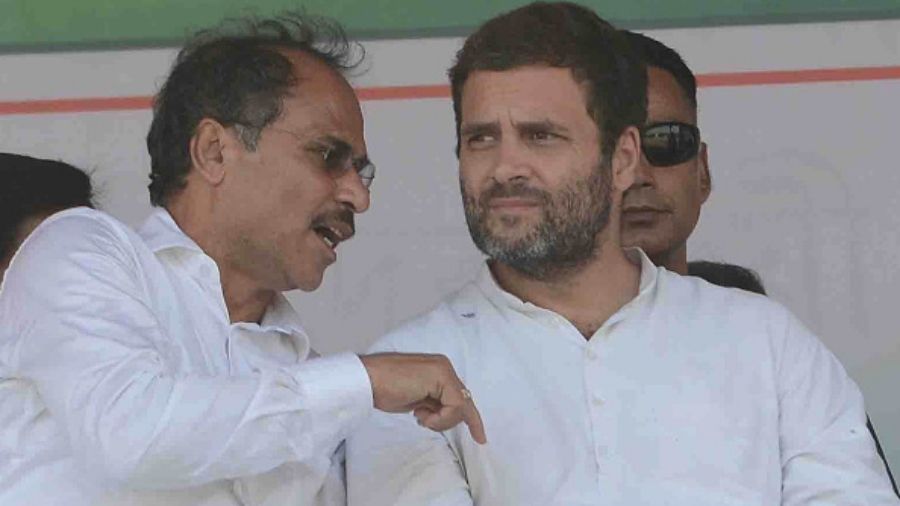 From Calcutta or any other distant part of the country, the Congress high command is seen the way the ancient Grecians would look at the Mount Olympus, the seat of the Greek Gods, seeking invocation and sacrifice.

One such prayer in the last one month from the Bengal unit of the party to the omnipotent high command was to field a candidate against Mamata Banerjee in the Bhowanipore bye-elections, scheduled for September 30.

The high command-cited larger Opposition unity and denied the prayer that has upset a section of the dwindling party in Bengal.

The events unfolding in three different parts of the country—Bengal, Tripura and Goa -- should force the high Gods of the Congress to rethink  how it handles the volatile Mamata Banerjee and the Trinamul Congress.

An editorial in the Trinamul official mouthpiece published on Saturday accused the Congress of going soft on the BJP.

“Today’s Congress is a failure, directionless. To defeat Trinamul they forge an alliance with CPM that helps the BJP. The flag of Congress is now in the hands of the Trinamul. It is the sea, Congress is a squalid pond,” the editorial said.

This is a continuation of a strategy taken by the Trinamul to attack the Congress while it is trying to establish itself as a viable alternative to the BJP across the country, and at the same time harp on Opposition unity.

On Friday night,   campaigning in the Bhowanipore constituency, from where she is seeking a third term, Mamata attacked the CPM and the Congress top brass without taking any names.

“CPM ruled in Bengal for how many years? 34 years. They committed innumerable atrocities, did they face any CBI, ED cases? Not a word was said against them. Only Chidambaram (P Chidambaram, former Union finance minister and senior Congress leader) was arrested, their (main people) were left untouched,” Mamata said.

The “main people” is believed to be a reference to the holy trinity of the Congress—the Gandhi family comprising Sonia Gandhi and her children Rahul and Priyanka.

“They tried to drag the Gandhi family in the National Herald case. If they couldn’t find any evidence against them, what can we do?” asked a Congress leader from North Calcutta.

"As a gesture of goodwill and courtesy we did not field any candidate but she does not deserve this courtesy Madam (Sonia Gandhi) herself instructed us not to contest against her. She (Mamata) is really a political humbug," said state Congress president Adhir Chowdhury.

Chowdhury feels Trinamul is following the Aam Aadmi Party’s line and should be held responsible for cracks in the Opposition unity as 2024 nears.

“The Aam Aadmi Party and the Trinamul are working on similar lines. Wherever they can they are trying to queer the Congress pitch in favour of the BJP. They are targeting rebels and others unhappy within the party. This same tactic both the parties are using in different states. Goa is one of them,” said Adhir Chowdhury, the state Congress president and Berhampore MP.

Incidentally, 18 years ago on a September afternoon, then BJP MP Balbir Punj (closely associated with the RSS) had described Mamata as “sakshaat Durga” (Durga’s incarnation) at an event organised by the Sangh. Mamata reciprocated calling the RSS  “true patriots.”

While the AICC was thinking the move would placate Mamata, the Trinamul in an apparent attempt to strengthen its organization is making forays into Tripura and Goa.

Mamata has been eyeing Tripura for a long time. Like in Bengal, the Trinamul in Tripura too made up of  Congress turncoats, many of whom later joined the BJP before the 2018 Assembly polls.

Last month, late Congress leader Santosh Mohan Dev’s daughter Sushmita joined the Trinamul and is believed would be projected as the face of the party in Tripura, though she has been nominated to the Rajya Sabha from Bengal.

Former Tripura chief minister Manik Sarkar has claimed as many as 22 CPM workers have been killed in recent times in the state, which the ruling BJP says is a legacy of the Left. While CPM party offices were burnt and its workers killed, Trinamul jumped into Tripura after some members of a professional political advocacy group I-PAC members, which has a tie up with Trinamul, were stopped from working in the state. Trinamul’s all India general secretary’s proposed march in Tripura is not for the sake of his party workers but professionals. Again, during the Bengal polls, similar activists hired by the BJP were arrested in East  Midnapore’s Contai.

The Trinamul sent MPs Derek O’ Brien and Prasun Banerjee to hoist the Trinamul flag on  Goa's beaches, where the party does not even have any name to project.

There are number of factors on which the handful of Congress workers still active in Bengal are fuming. The most unhappy man in the Bengal unit at this moment is the party’s South Calcutta district unit president and local Bhowanipore lad Pradip Prasad. While Congress bigwigs from the same locality have jumped ship over the last 23 years and turned into stalwarts in the Trinamul, Prasad has stayed with the Congress.

This time he was keen to contest against Mamata in the Bhowanipore bypoll but the AICC which decides on all matters turned him down.

Since 2016 when the Left and the Congress went into an alliance, the Bhowanipore seat was left for the Congress. The Congress nominee, Md Shadab Khan, received 5,211 votes, barely four per cent of the total votes.

In the absence of the Congress, the CPM has fielded advocate Srijib Biswas. The BJP had bagged 35 per cent votes in the last elections from the seat.

“I would have lost the bypoll, but at least the Congress would have been in the picture. What do we gain by conceding ground to the Trinamul? This sends a wrong signal to the remaining voters who are still loyal to us,” said Prasad.