The camps wound up for the day at 4pm, but people in droves queued up till evening 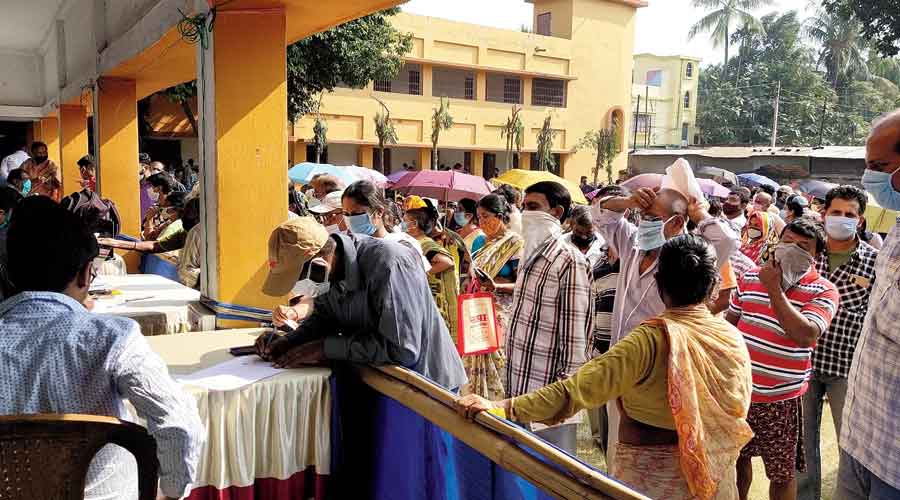 Around 1.25 lakh people applied for benefits under government schemes at 20,000-odd camps set up under “Duare Sarkar (government on doorstep)”, said sources on Tuesday, the first day of the 60-day programme to increase the ambit of beneficiaries in the biggest outreach attempt of the Mamata Banerjee government.

The camps wound up for the day at 4pm, but people in droves queued up till evening.

Speaking at Nabanna, Mamata said that by 3.35pm, 1.18 lakh had people applied for various schemes. “The response is overwhelming. We will try to give benefit to all the eligible applicants,” she added.

Senior government officials said the footfall went up at camps across Bengal after the chief minister’s announcement.

Sources in the state government said the top brass was happy with the “overwhelming response” as it hinted that people still trust the ruling establishment.

An official said that they expected footfall at the camps to rise in the coming days from positive word-of-mouth.

“The camps will continue till January 31, 2021, and the first day’s figures suggest that it (the programme) is an instant hit... The ruling establishment wanted to connect with common people through the camps and it appears that people have responded with great interest,” said a source.

Visits to some camps in districts revealed that most people were trying to get more information on how to apply for Swasthya Sathi, a fully free insurance scheme for all, allowing medical expense cover of Rs 5 lakh per family per year.

The state government recently announced to bring 2.5 crore more people, from existing coverage of 7.5 crore people, under the scheme. The expansion was aimed at countering the BJP’s criticism that the state government did not allow people to avail the benefits of Ayushman Bharat, a central scheme offering insurance coverage.

Reports from districts suggest people were queuing up for pension schemes, which the government offers widows, senior citizens and other weaker sections, and student scholarships.

Some sceptics suggested that this outreach was launched to cover “past mistakes”.

“The West Bengal Right to Public Services Act, 2013, seeks to ensure timely delivery of government schemes... Now questions on whether the Act has been implemented properly are pertinent as the government seems to have been forced to launch a programme to reach out to people with schemes,” said Biswanath Chakraborty, professor of political science, Rabindra Bharati University.

A senior government official swatted away the criticism — some Opposition leaders are already hurling similar questions — by explaining the difference between the Act and the outreach.

“The Act was brought about to ensure that a person gets a service within a specific timeframe after filing an application...Duare Sarkar, however, is an outreach exercise to ensure that people are not left out of schemes. As these people never applied under any scheme, the Act (and the timeframe clause) do not apply to them,” said the official.

Based on ground reports, an official said, it was apparent that many had not applied for benefits under government schemes despite being eligible. “With this programme, the message is that the state government is keen to offer benefits to those who have not even applied for them.”