Greg Louganis, the American diving legend has 4 Olympic and 5 world championship gold medals to his name 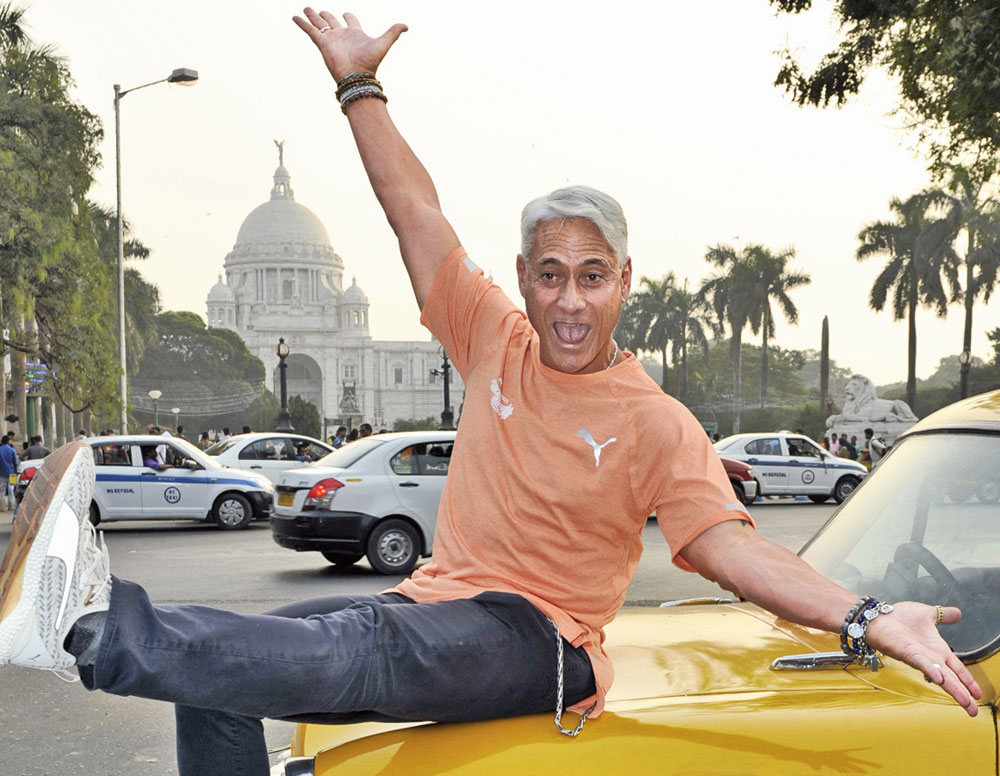 Goofy Greg: Perched on the bonnet of a yellow taxi, Olympian Greg Louganis strikes a pose against the backdrop of the Victoria Memorial on Thursday afternoon. The diving champion is in town as the international event ambassador for the Tata Steel Kolkata 25K, partnered by The Telegraph, on Sunday.
Picture by Sanat Kr Sinha
Rith Basu   |   Calcutta   |   Published 14.12.18, 07:41 AM

Greg Louganis, the American diving legend with a scar on the back of his head as famous as his Olympic feats, is in Calcutta to inspire and charm with stories from his life like how he might never have taken to the sport had his mother not felt compelled to divert him from doing gymnastics in the home pool.

Louganis, who carries his 58 years with the spirit of an 18-year-old, has four Olympic and five world championship gold medals to his name. But he is mostly remembered for his last Olympics in 1988, when he banged his head on the springboard during a dive and suffered a deep cut and concussion. He famously returned in 30 minutes with four stitches on his head to complete two dives and strike gold.

As international event ambassador for the Tata Steel Kolkata 25K, partnered by The Telegraph, Louganis isn’t trying too hard to be the celebrity face of the road race. A visit to the Victoria Memorial on Thursday saw the American of Samoan and Swedish descent play more the happy first-time visitor than someone out to flaunt his status.

He gleefully posed on the bonnet of a yellow taxi in an orange vest, his grey hair tousled by the wind, as people walked past without recognising that the 5’9” frame in front of them belonged to a champion Olympian.

Louganis, who arrived in Calcutta at 2am and is staying at The Oberoi Grand, said the one thing that had struck him about the city was that there were “a lot of cars”.

When Metro met him at the hotel, he was more than eager to recall his childhood and the long road to becoming a champion diver. The adopted child of Frances and Peter Louganis was only eight months old when the couple brought him home.

“I was into dancing and gymnastics from an early age. When I was eight years old, we got a swimming pool in our home and I started diving while doing some of the routines I had learnt in gymnastics. My mom got nervous that I would hurt myself and put me in a diving school,” Louganis said.

At 12, he developed a knee problem for which he had to give up dancing, aerobics and gymnastics. But his doctors advised him to continue diving because he had asthma and they thought the sport would improve his lung function.

Four years later, Louganis won a silver at the Montreal Olympics as a 16-year-old. He still rues the American boycott of the 1980 Moscow Games, when he was the reigning world champion.

Louganis said his coach had reminded him that he had achieved enough in his career and should not push himself after the injury in his last Olympics. “But I did not for a second consider quitting,” he said.

Not only did that injury during the 3m springboard event and his brave comeback make Louganis a household name across the world, the scar on his head remains the mark of a champion in the eyes of many. “I hurriedly got four stitches to be able to compete. Later, at the Games village, they took out those stitches and put five new ones. Sometimes, when I go for a haircut, the dresser goes, ‘That’s the scar!’.”

The hero of Louganis’s favourite fiction series, Harry Potter, also carries a scar on his forehead. In a nod to Potter mania, he has named three of his canines as Dobby, Gryff (Gryffindor) and Hedwig.

In his personal life, Louganis came out as gay in 1994 and a year later announced that he had learnt he was HIV positive just before the 1988 Seoul Olympics.

He has just one message for participants in the Tata Steel Kolkata 25K: “Just turn up and hit the road. Soak in the atmosphere and enjoy the run. During the difficult phases, the love of your close ones and family will pull you through.”

Injury in Seoul made me more focused, says Greg Louganis