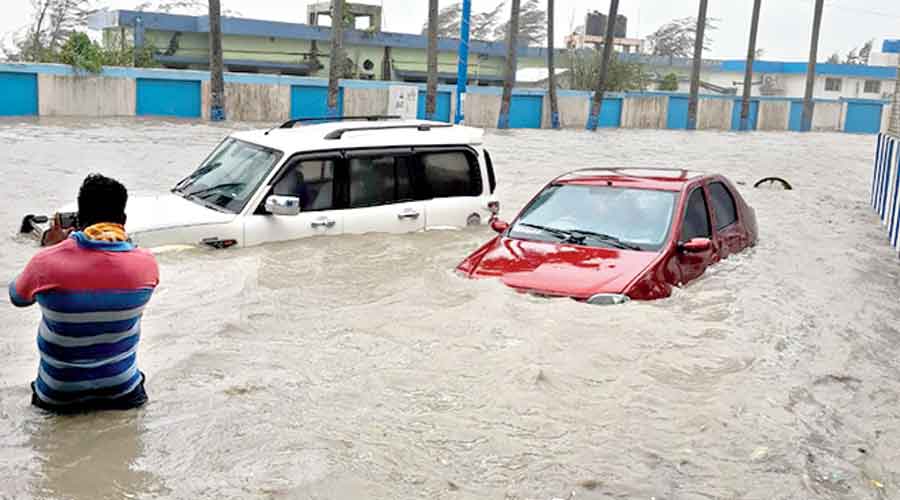 A man stands in waist-level water along with vehicles on a street in Digha
Telegraph picture
Anshuman Phadikar   |   Tamluk(EastMidnapore)   |   Published 27.05.21, 01:07 AM

Shelter initiatives to protect people from the impact of Cyclone Yaas in coastal East Midnapore proved below par on Wednesday morning, as the storm coupled with the high tide rapidly flooded Digha, Sankarpur, Tajpur and Haldia.

Residents termed the flooding “unprecedented” with many cyclone shelters and schoolhouses proving no match for the task at hand.

In Chandpuri, 39-year-old Ankur Jana, his wife, two children had taken refuge in the cyclone shelter. “We are used to this. But this time, the shelter got flooded in the morning (Wednesday),” he said.

"We have never seen this kind of rain in Tajpur,” said Shyamal Das, secretary of the Tajpur Hoteliers’ Association.

In Sankarpur, closer to the sea, Marine Drive lay flooded.

In Digha, spurred by the cyclonic storm, the tide triggered high waves that crossed guard walls around 9am. In 30 minutes Digha was flooded. The NH116B, which is the main roadway to access the tourist town, lay flooded for several hours.

In Haldia, the breach of an embankment on the Hooghly river flooded several large and small factories on the banks. At the Haldia port, the