Two-wheeler: the panacea for problems in post Covid-19 world 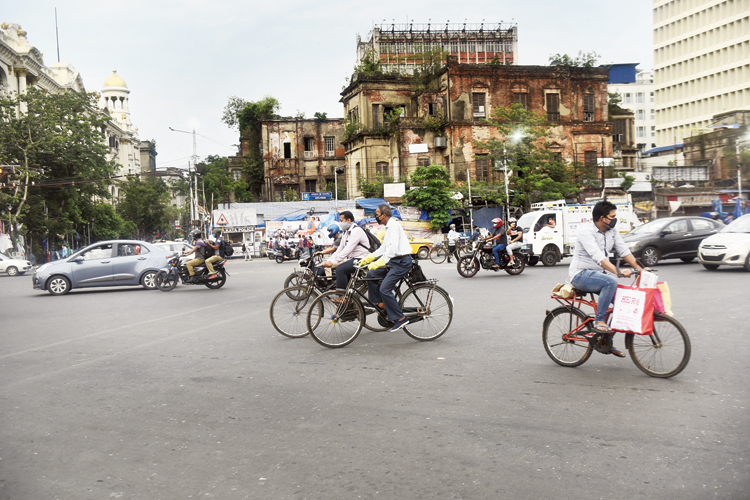 Wednesday is World Bicycle Day and the bicycle mayors of Calcutta and Howrah are campaigning hard for the vehicle of their choice.

Yes, you heard it right. We have a bicycle mayor of Calcutta, Satanjib Gupta, and one of Howrah, Sourav Chattopadhyay.

Appointed by BYCS, an Amsterdam-based global network that promotes the bicycle, Gupta, 42, a documentary filmmaker, and Chattopadhyay, 25, an IT professional, are glad to repeat what is being recognised globally like never before: that the two-wheeler can be a solution to several problems of the contemporary world, especially in these times of Covid-19.

The mayors, who are also members of Calcutta Cycle Samaj, an organisation to promote the bicycle, begin by pointing out that 100 years ago, in the aftermath of the Spanish flu, the bicycle was looked at as a vehicle that promoted robust lungs and kept influenza away. They also remind others that the bicycle was still banned on many Calcutta streets.

In a letter written to Bengal chief minister on May 13, the mayors talk about bicycles as the mode of transport that felicitates social distancing.

According to reports, in the post-pandemic era, “Delhi Metro will require 6-times increase in services, Mumbai’s suburban railway needs a 14-16 times expansion, and the Bangalore Metropolitan Transport Corporation needs an additional fleet of 24,000 buses”.

The scenario will not be starkly different for Bengal in general, and Calcutta in particular.

With no vehicle on the roads during the lockdown, the Air Quality Index (AQI) has measured around 50. That proves what petrol and diesel-run vehicles do to the city air, say the mayors.

The bicycle needs no fuel. And no money either. “The worst-hit sections of the society will benefit the most from commuting on bicycles, which are zero-cost,” says Gupta.

The mayors refer to a The Energy and Resources Institute (TERI) report that says the economic benefits of cycling amount to nearly Rs 1.8 trillion which would account for 1.6 per cent of the nation’s GDP (2015-2016).

In these times of trouble, that is a figure to consider.

The bicycle is a zero-emission, sustainable and environment-friendly mode of transport. Besides, cyclists have not only the best lungs and best-toned bodies, but also the best skin and hair quite often, feel bicycle advocates. And we haven’t even started on what the bicycle did to liberate women.

Cities around the world are taking quick steps to boost their bicycling infrastructure to combat Covid-19 and climate change.

Bogota, Brussels, Philadelphia, Washington and other cities have all either set up temporary cycling lanes or expanded their existing ones.

In India, cities like Bangalore, Thiruvananthapuram, Chennai and New Delhi have been drawing up substantial plans for ensuring non-motorised, eco-friendly transport.

In this context, the mayors want the authorities in Calcutta and Bengal to consider the following:

⚫Lifting the ban on cycling on many of Calcutta’s roads

⚫“No Cycling” boards need to be removed from the major arterial roads of the city. Such boards do not do any good to the image of a modern city

⚫Bicycle Sharing Systems: This would be of utmost benefit to those who cannot immediately afford to own a bicycle and those who are in the city only temporarily

The bicycle mayors are waiting for a response from the chief minister.