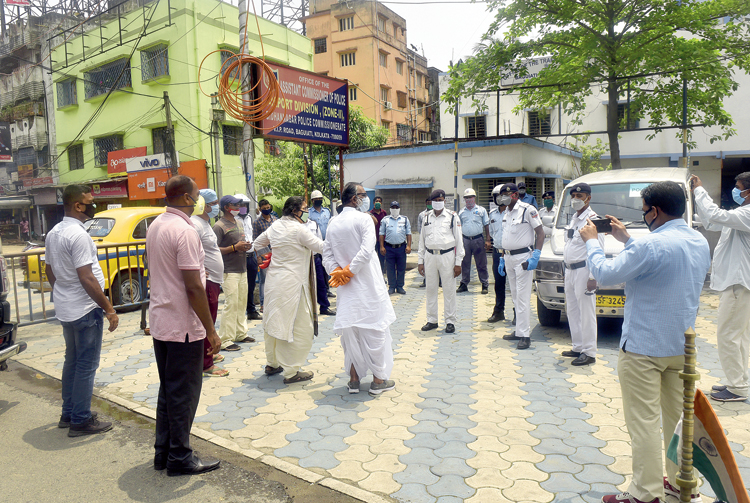 The death toll from Covid-19 reached 61 in Bengal on Monday with 11 persons succumbing to the disease in the past 24 hours.

According to the state government, there are 1,259 total confirmed novel coronavirus cases and 61 of them were reported in the past 24 hours. The number of cured patients has reached 218 and the recovery rate is 17.32 per cent.

The detailed figures were given by top government officials at a press conference in Nabanna on Monday evening. This was the first press meet by the government on Covid-19 patients since Thursday.

The officials said on Monday that the number of tests in the state was 279 per million.

The number of deaths attributed directly to the pathogen rose from 33 on Thursday to 61. The toll was 50 on Sunday. There were deaths of 72 other Covid-19 patients from co-morbidities, according to the state government.

There are 4,860 people at the state-run quarantine facilities and another 5,755 people in home quarantine.

“Our recovery rate (total cured out of total confirmed cases) is 17.32 per cent. Confirmed positive cases per million — our analyses have shown — is 13.98. Deaths per million people is 1.47,” the chief secretary said.

Sinha said Bengal was lagging behind than other states in terms of testing and the number of tests conducted per million. He attributed the less number of tests to several technical and logistical issues with the Indian Council of Medical Research under the central government. “But over the last few days, we were able to ramp up testing and we have been sharing those figures with you daily. Tests per million 10 days ago stood at 109, today, it is 279,” he said.

“Our strategy for Covid-19 management include optimal testing, active contact tracing, isolation and quarantine, and best treatment of all novel coronavirus patients,” said Sinha, adding that Bengal had conducted 2,201 tests in the past 24 hours and 25,116 tests in total.

The percentage of positive cases out of samples tested stood at 5.01.

The state , said Sinha, had received 10,096 applications from industries and enterprises for reopening and already approved 4,340 requests. Of the 5,362 rejected applications, most were for industries in or around containment zones. The government, he said, is likely to decide on the rest 394 applications by Tuesday.