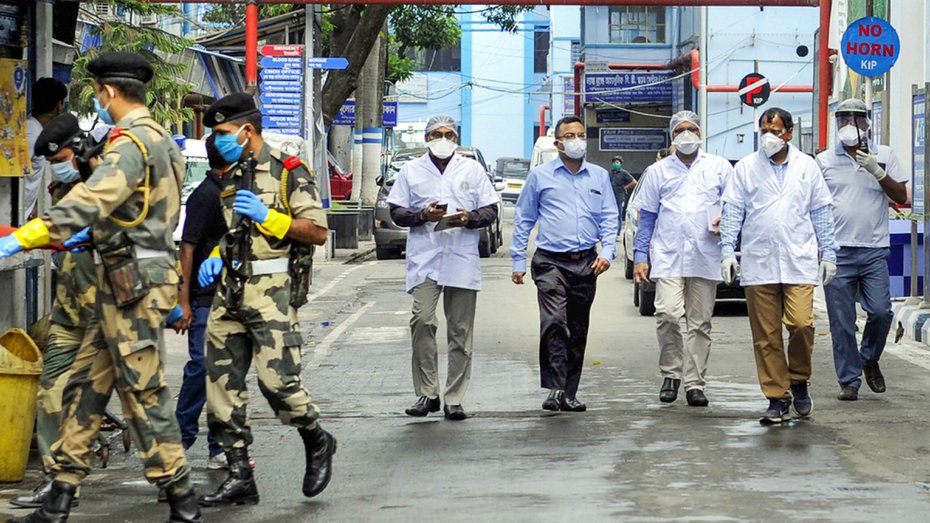 An inter-ministerial central team raised several questions and sought clarification from the Bengal government based on its findings during visits to a quarantine centre and a Covid-19 hospital here on Thursday.

In a two-page letter to chief secretary Rajiva Sinha on Friday, the team raised questions on long wait for reports of patients in the isolation wards, patient admission system in MR Bangur Hospital and lack of enough ventilators at the facility.

The letter also sought details of health screening data in districts, plan on augmentation of testing facility and the insurance scheme announced for health workers involved in the Covid-19 battle.

The central government officials visited the quarantine centre at Chittaranjan National Cancer Institute at Rajarhat and the dedicated Covid hospital, MR Bangur, on Thursday after a detailed presentation by the health department on the preparedness of the state to tackle spread of the disease.

A source aware of the feedback from the team said: “The team highlighted the points as part of their attempt to identify areas where the state needs improvement.”

Some of the issues raised by the IMCT include:

Sources in the health department said the central team had apparently raised some valid questions but the state government was working on these issues already.

“For example, we are working on the shortage of ventilators. We have ordered more than 300 ventilators. But the supplies are getting delayed. As soon as we get the delivery, these will be installed,” said a senior health department official.

Sinha said the letter had been forwarded to the health department and it would send the reply.

“All the letters they have sent are related to health department. I have sent all the letters to the health secretary. He will send them replies. I had said earlier that we are ready to clear doubts always,” Sinha told a news conference at Nabanna on Friday.

He, however, made it clear that the manner in which the team had raised questions didn’t go down well with the state administration. “Please give us constructive and positive suggestions. They have not come here as inspectors. They have not come here as auditors. We don’t have to pass in any exam in the eyes of anybody. The only exam we have to pass is that exam that people conduct,” said Sinha.

The team on Friday visited a quarantine centre and a dedicated Covid hospital in Howrah. The team was accompanied by a senior health department official.

The team had earlier wished to visit some hotspots, Covid hospitals, quarantine centres and markets in North 24-Parganas and East Midnapore also.

In Siliguri, another IMCT visited the North Bengal Medical College and Hospital and some places in the town on Friday.

The team moved through busy thoroughfares like Hill Cart Road and Burdwan Road on Friday to check out the enforcement of the lockdown.

“The state is now cooperating with us. We have visited the NBMCH and met the head of the microbiology department. As of now, NBMCH has an adequate number of testing kits,” said Vineet Joshi, an additional secretary of the Union HRD ministry who is heading the team.