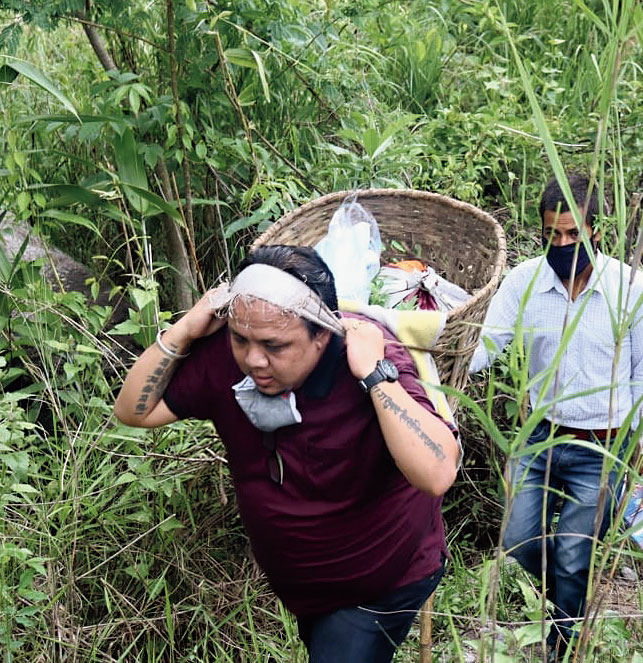 The “mota (fat)” MLA of Darjeeling, Neeraj Zimba, has purportedly carried 15kg of edibles on a dhoko (bamboo basket) and walked 6km through difficult terrain to reach 17 families at a remote village in Kurseong during the lockdown.

The legislator said carrying relief material on a dhoko on Monday and the subsequent upload of its video on his Facebook page were not for publicity but a “symbolic gesture” to feel the pain of the people.

“I indulge in rhetoric; rhetoric is important in politics. But in this case, I believe rhetoric and all do not come into play as that is something I did from my heart,” Zimba told The Telegraph.

The video of the trudging Darjeeling legislator is definitely striking and most of the comments on his Facebook page also suggest hardly anyone doubts Zimba’s sincerity. There were, however, some suggestions that the MLA could help the villagers in a more effective way.

How did he come across the idea of carrying a luggage and walking such a distance?

“A group of friends, who are WBCS officers, had gone to Kalamathi a week before and they had told me to help the residents,” said Zimba who added that the officers felt that he could make it to the village.

The MLA said he had decided to carry the load after he found children aged around 14 to 15 years had come to the nearest road carry the basket. Kalamathi is only accessible by foot. “To get 1kg of salt, the villagers have to travel 24km to and fro ,” said Zimba.

The Darjeeling MLA has said the village is in the Ambootia tea garden near Kurseong and one of the short routes to reach there is through Bungkulung in the Mirik subdivision.

“There were around 30 school children at the village and we distributed exercise books, pencils and erasers among them,” said Zimba.

The Darjeeling MLA who considers GNLF founder Subhash Ghisingh as his political “guru” has at times come up with maverick ideas.

During the Assembly byelection, Zimba had engaged in self-deprecating jokes, which many believe turned out to be a smart campaign strategy.

Another post on the GNLF page said: “Don’t Press NOTA, Vote for MOTA.”

Mota in Nepali means a fat person while chotta means a deceitful person.

Going by reaction in social media, Zimba seems to have climbed a clever step this time, too.