Senior officers move around in teams, asking people to stay indoors and checking security measures in the containment zones 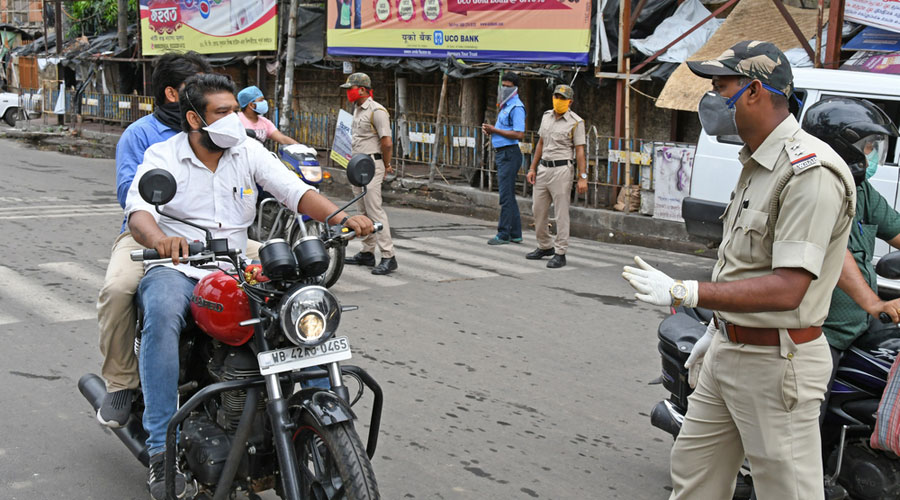 Senior police officers hit the streets of Siliguri on Thursday afternoon and moved through all nine wards which were declared as containment zones to enforce the lockdown strictly.

The inspector-in-charges of respective police stations, along with senior officers, moved around in teams, asking people to stay indoors and checking the barricades put up at the entry points of the wards. A number of people were detained in the evening for violating the lockdown, said sources.

The strict lockdown began in the Siliguri containment zones on Thursday evening.

“In north Bengal, we need stricter lockdown, particularly in Malda district and the Siliguri subdivision of Darjeeling district. This is because Covid-19 cases are steadily rising in Malda and Siliguri. New coronavirus cases are reported from some other districts, but the number is quite low. Senior officials of the state government and even the chief minister have highlighted the need to take all possible steps to curb the spread of the pandemic in Siliguri and Malda,” said an official of the state health department.

“While the caseload is higher in Malda, the number of deaths are high in Siliguri. That is why the administration enforced the lockdown in a number of areas of the Malda district from Wednesday. From Thursday afternoon, all necessary steps would be taken to ensure that the lockdown is enforced in its best possible manner in all nine wards of the city which have been marked as containment zones,” said an administrative official of Darjeeling district.

In Malda, the roads were deserted and shops and marketplaces were closed on the second day of the fresh lockdown.

Unlike Wednesday, hardly a few people came out of their homes as the police patrolled the town and its suburbs.

In South Dinajpur, 30 people, including the Trinamul MLA of Kumarganj, were detected with the novel coronavirus on Thursday.

“So far, 277 people have tested positive for the pathogen in the district but 210 of them were cured of the infection. This has indeed brought some relief to the administration. However, it is not the time to be lackadaisical and hence, containment zones have been marked both in urban and rural areas to prevent the spread of the contagion,” an official said.

The situation is, however, comparatively better in other districts like Kalimpong, North Dinajpur, Cooch Behar and Alipurduar where only a few cases were reported in the past few days.

The Madanmohan Temple in Cooch Behar reopened on Thursday.

“Not more than 15 people will be allowed at a time on the temple premises. We will see if all health safety protocols would be maintained at the temple,” said Cooch Behar district magistrate Pawan Kadyan, who is also the chairman of the Debottur Trust that manages the temple.