Sources said 34-year-old Abhijit Sarkar, a resident of Shantinagar in Alipurduar town, had been under treatment at the district hospital here 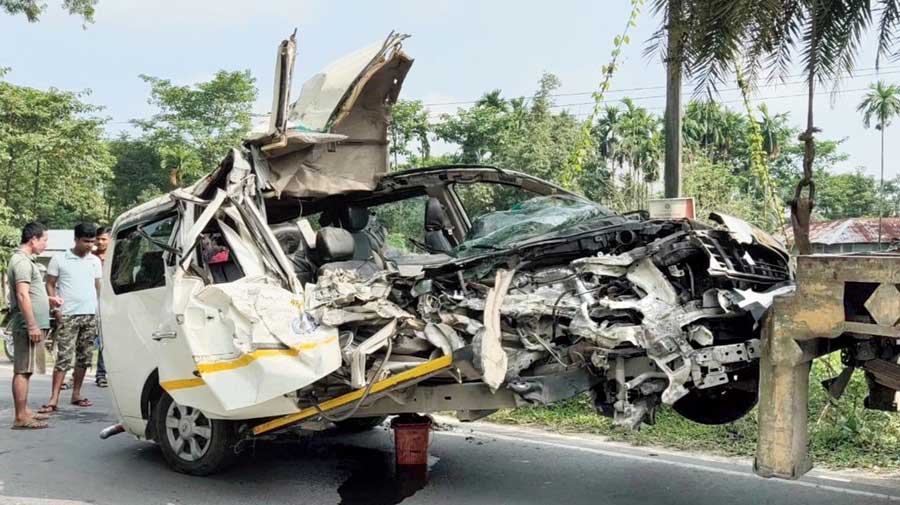 Five persons, including a critical patient who was suffering from liver cirrhosis and his wife, died when the SUV they were travelling  in collided head on with a bus near Falakata in Alipurduar district on Monday morning.

Sources said 34-year-old Abhijit Sarkar, a resident of Shantinagar in Alipurduar town, had been under treatment at the district hospital here.

On Sunday late evening, doctors told his family members that the patent should be shifted to Siliguri for better treatment.

The relatives started scouting for an ambulance and they couldn’t find one initially. At last, they could locate an ambulance of the Indian Red Cross Society. “The ambulance driver, who had just returned from Siliguri, said he was too tired to drive immediately and told the family members that he could take the patient to Siliguri around 6am,” said a source.

The tensed family members, however, kept on exploring other options throughout the night and around 5am, they decided to hire an SUV and head for Siliguri.

They started for Siliguri with Abhijit. When Mahindra Xylo reached near Balasundar village under Falakata police station around 6.30am, it collided head on with a bus of the North Bengal State Transport Corporation on NH27.

Local people said though the bus driver had pulled the brakes and halted on the left side of the road, the driver of the SUV could not control the speed and rammed into the bus. The front side of the bus was damaged while the SUV that had virtually turned into a mangled pack of metal went off the road and fell into a ditch.

The local residents rushed for help and informed Falakata police about the accident. The police, along with the local fire brigade, reached the spot and started rescue operations.

“We were sitting at a tea stall and saw the car coming at a high speed. The driver could not control the speed on a curve and the SUV collided with the bus and fell into the roadside ditch,” said Ratan Das, an eyewitness.

As the passengers were brought out, five were found dead. They were Abhijit, his wife Jhuma, 29, his brother-in-law Habul Sarkar, 40, Basudeb Karmakar, 50, one of his relatives, and Bijoy Mohanta, 42, the driver.

Sona Biswas, another relative of Abhijit, was the sole survivor. “There was a crashing sound and then everything went blank,” he said. Abhijit and Jhuma are survived by their only son, who is five-year old.

Amitabha Maity, the superintendent of police of Alipurduar, said the preliminary investigation had revealed that the car was running at high speed. “We have started an investigation. The bodies have been brought to Alipurduar and would be handed over to the families.”