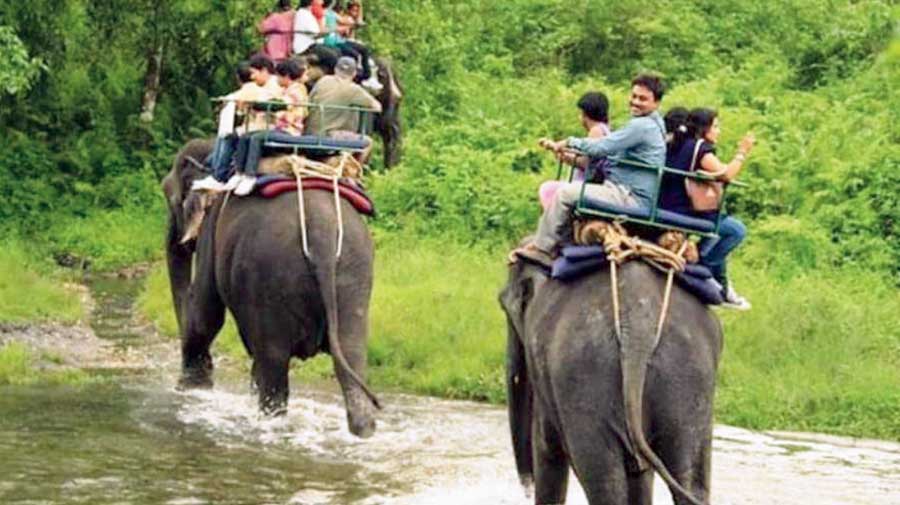 The state forest department should resume elephant safaris in the Gorumara and Jaldapara national parks of north Bengal to bring in more tourists, stakeholders of the tourism industry in the Dooars said on Monday.

The demand comes a day after the elephant safari was introduced in the Kaziranga National Park and Tiger Reserve in neighbouring Assam.

Kaziranga, the largest habitat of one-horned rhinos in the world and a world heritage site recognised by the Unesco, had reopened its gates for visitors on October 21 this year.

However, the park authorities resumed elephant safari — the principle attraction for any person visiting a wildlife habitat of this region — from November 1.

“Tourists have started visiting the Dooars but the footfall is pretty low compared to early years. We are getting inquiries but many people, who wish to visit the region, are disinclined to confirm their trips as they cannot enjoy the elephant safari, both in Gorumara and Jaldapara,” said Biplab Dey, assistant secretary, Dooars Tourism Development Forum.

In the Dooars, tourists who want to visit the reserve forests can avail themselves of car safaris and climb watchtowers to relish nature and wildlife.

“Wild animals are often sighted during car safaris but elephant safari has always remained the top attraction for tourists. The facility has been opened at Kaziranga in Assam and we believe it can be introduced here too. Officials of the state forest department should think about it and make a decision. This would also help in reviving the tourism sector that has suffered a major setback since mid-March because of the Covid-19 pandemic and the lockdown,” said a resort owner at Lataguri on the fringes of the Gorumara National Park.

Told about the demand, a  senior forest officer said the department was exploring options to ensure that the contagion did not spread if elephant safari was introduced.

“We understand that resumption of elephant safaris can bring in more tourists to the region. But simultaneously, we will have to consider the risk of infection. A new set of rules has to be framed before this facility is reopened for visitors,” he said.