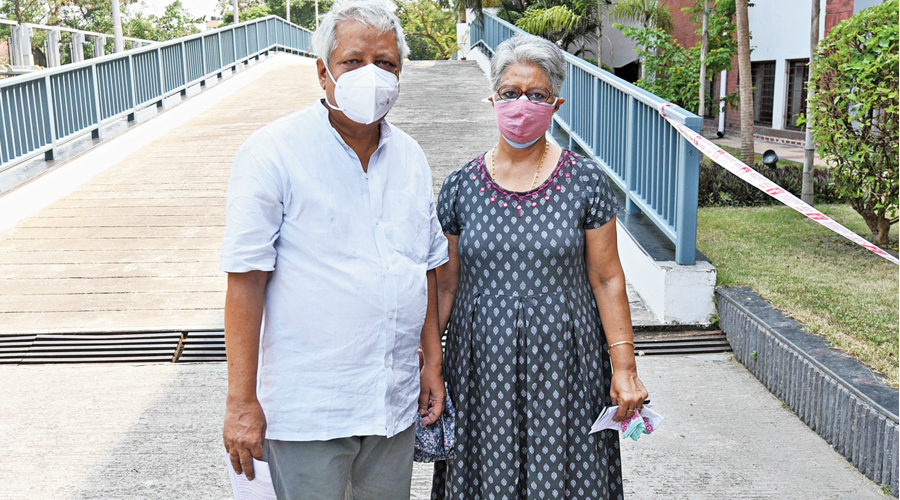 Dipak Kumar Mondal, 70, a doctor, and wife Krishna, 67, had gone to South City International School to cast their votes on Monday afternoon. The two live in South City and walked to the booth. Mondal said the Kumbh crowd was a talking point among doctors. “The Tablighi Jamaat drew so much flak last year. But look at what happened at Kumbh. The congregation should have been avoided,” he said.
Telegraph picture
Subhajoy Roy, Debraj Mitra   |   Calcutta   |   Published 27.04.21, 03:02 AM

The bungling of Covid-19 management was a burning issue for voters on Saturday, taking precedence over issues like unemployment and development that emerged frequently in conversations during the last few rounds of voting in Calcutta.

Many of the voters The Telegraph spoke to across constituencies blamed the Election Commission of India and the “babus from Delhi” for the current situation.

The election commission should have at least clubbed the last three phases of the elections as there was enough evidence that things were going out of control, voters said. The Centre should not have wasted crucial time when the Covid numbers were low and used the relative lull to ramp up health infrastructure, a voter in Ballygunge said.

Employment and development can only be of use if people live to enjoy them, “only if their health is fine”, said a young voter in Rashbehari.

Shagufta Taj (centre) with parents Taj Mahammad and Sabiya Taj outside a booth off Broad Street in Ballygunge.
Telegraph picture

“Issues like unemployment and development have become secondary. It is now a question of life and death,” said the businessman.

Sukla Mitra, 70, Moloy’s mother, added: “There can be no justification for allowing such huge rallies and meetings. No one was wearing masks during election campaigns and there was no distancing. Yet the rallies continued.”

Sixty-nine-year-old Chandra Chatterjee, who voted at a booth in Lake Market, found “no justification” for having eight-phase polls in Bengal. “The eight-phase polls are squarely responsible for the Covid situation in Bengal today. If elections can be held in two-three phases in other states, then why not in Bengal?” she asked.

“The babus from Delhi came almost every day to hold rallies and meetings, while the Covid situation kept worsening.”

Moloy Prakash Mitra outside a booth on Ballygunge Circular Road on Monday.

Shagufta Taj, 25, who voted with her parents at a school off Broad Street in Ballygunge, also felt that large rallies should have been stopped. “Everyone knew that the pandemic was around, yet large public meetings were allowed. Why? The people in those campaigns acted very irresponsibly,” she said.

A month before that, on February 27, the state had reported 192 new Covid cases and two deaths.

“The numbers had started to rise by the time the first phase of polls was held. But neither the election commission nor the leaders from Delhi felt that it was necessary to stop large gatherings to halt the spike,” said a voter who wished not to be named.

Many people have been critical of the role played by Prime Minister Narendra Modi and home minister Amit Shah, who held rallies in Bengal almost every day even as Covid numbers kept rising and more and more people dying of the disease.

The argument was repeated by voters on Monday. “What was the need of holding so many rallies by the Prime Minister? All the meetings had large gatherings,” said Mohammad Tarique Ahmed, 28. He felt that the last three phases of the polls should have been clubbed to contain the spread of Covid-19.

“The Trinamul Congress had proposed to the election commission that the last three phases be clubbed but the panel did not agree. There was enough evidence by then that the Covid situation in our state was getting out of control. Are people’s lives less important than elections?” asked Ahmed, who voted at Lady Brabourne College.

Conversations with voters in some of the earlier phases of the polls had revealed that issues like jobs, communal harmony, development and women’s safety were their top priorities. But on Monday, most voters Metro spoke to said that the Covid situation in the country was at the top of their mind now. “Covid is the most important issue now,” said Shagufta.

Many residents in the south Calcutta constituencies that went to the polls on Monday did not vote because they were angry with how the Centre had ignored the deteriorating Covid situation.

Many of these people were until a few days ago vouching for a change in Bengal as they believed “a change in Bengal” would create more jobs and usher in an era of rapid development in the state. But the Covid situation seems to have overtaken their aspirations for a change.

“The Prime Minister in a recent rally boasted that he had never seen such a huge gathering in a rally, but we all know that staying away from one another helps reduce the spread of Covid.

How can a Prime Minister make such an irresponsible statement?” said a south Calcutta voter, a long-time admirer of Modi.