All paws led to Kankurgachhi for a round in the ring 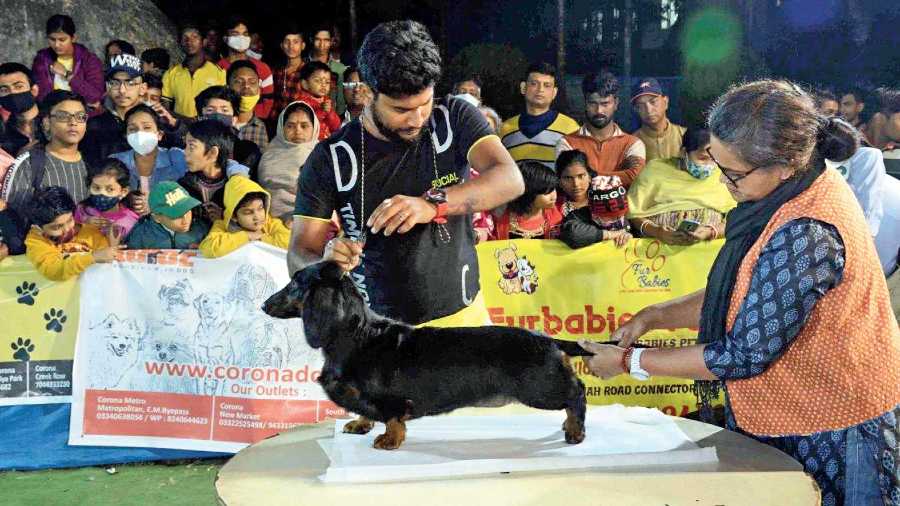 Jurassic Park, the dinosaur-themed playground in Kankurgachhi was a haven of canine folk earlier this year. Kankurgachhi Dog Lovers had organised a dog show that drew nearly 100 dogs and even more dog lovers.

While some pet parents had brought their dogs in for a lark, others were serious about the competition. “Are pets born only to please the families they live with? I know my dogs are meant for greater things and I want them to join shows and prove how competent they are,” said Moumita Majumdar. She had come with her Beagle Alex, who she said was her shejo chhele (third son). Back home she had a Labrador boro chhele, German Shepherd Dog mejo chele and Pug chhoto chhele. “My older dogs are already champions in the show circuit so I didn’t get them today. They are all so handsome they would have attracted a huge crowd, something we’re trying to avoid during the pandemic.”

A Bichon Frise poses for the camera with his tongue out.
Basudeb Behera
Advertisement

Suparna Bose was equally proud of her Chihuahua Jerry. “Regardless of the outcome, I feel dogs should be encouraged to participate in shows. Let them challenge themselves and have something to look forward to,” she said. It’s another matter that little Jerry has won many trophies, each of which is bigger than her!

Another Jerry at the show was an extremely friendly “Indie”. “He wants to go meet every dog he sees, big or small. It can be dangerous if the other dog is aggressive,” said Sathi Chakraborty. “Good thing my nephew Soumik has come with me today. He’s having to physically restrain Jerry from running off.”

Right then, an announcement was made about a pair of keys that was found in the ground. Turns out they had fallen out of Soumik’s pocket in the hullabaloo!

Sukanta Mondal, who had got his Caravan Hound Sree, was delighted to see Indian breeds becoming popular at shows. “A couple of years ago there were just two or three of them in the city but now there must be 20 — Mudhols, Pashmis, Caravans... Shows are the best platform to showcase them to dog lovers so they consider adopting them,” he said.

This was the seventh edition of the show and drew curious and excited children as well as adults like Amit Mitra, who said he loved dogs but got vetoed by his family whenever he broached the subject of bringing home one. “So I come over whenever I hear about a dog show and spend the whole day. The most adorable dog today, I thought, was a Chihuahua. I wish I could take her home!” he laughed.

“It wasn’t easy pulling off a dog show in the midst of a pandemic. We had to take several permissions and maintain safety protocol,” said Snehashis Saha, secretary of Kankurgachi Dog Lovers. “But the show drew even more participants than last year, possibly as all registered shows have been called off this year.”