Senior citizens pull off own puja in New Town 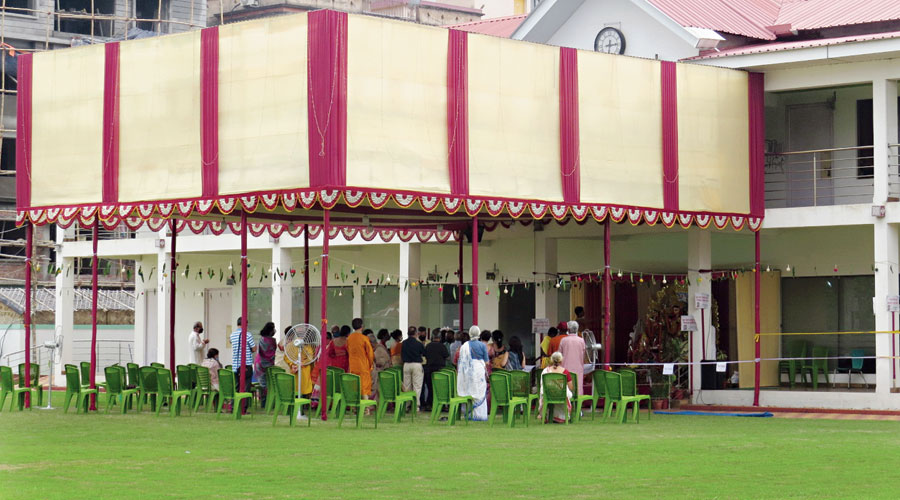 Members of Swapno Bhor hold their puja on the verandah outside the club building.
Pictures: Sudeshna Banerjee
Sudeshna Banerjee   |   Calcutta   |   Published 30.10.20, 02:50 AM

This was the second year of what is described in the banner at the gate as Prabinder Sarodotsav. “Because of the situation, the administration was initially hesitant to allow the puja. Later they relented when we agreed to abide by all rules and regulations they would set,” said Bhaskar Sardar, the puja secretary.

A major change suggested by Hidco chairman Debashis Sen was shifting the puja out from the Snehodiya hall to the verandah of Swapno Bhor just across the road from the senior citizens’ home, to conform with the state government’s guideline of keeping three sides of the venue open. 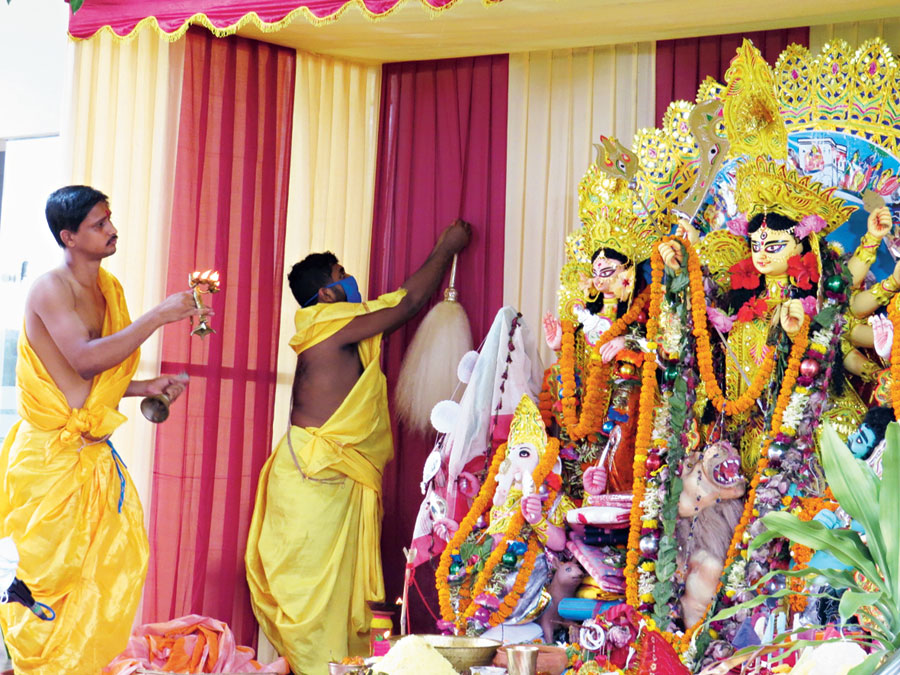 In fact, the decision to go ahead was taken as late as September 30. “Some suggested ghot pujo. But we were bent on getting an idol,” said treasurer Bibhas Krishna Palit. But as a precaution, they decided not to venture out all the way to Kumartuli like last year and sourced the idol from nearby Beleghata.

The organisers do not collect subscriptions from the neighbourhood, nor do they approach offices for sponsorships. “In this situation, that would not have been advisable anyway. What we raise is purely from our members,” the treasurer added.

Even then, many were staying away over the recent months. “Of our 700-odd members, about 110 subscribed. Some mustered courage and came after Puja started, even as late as Navami, only to pay the chanda,” said Prabhas Chandra Mahanta, a member. 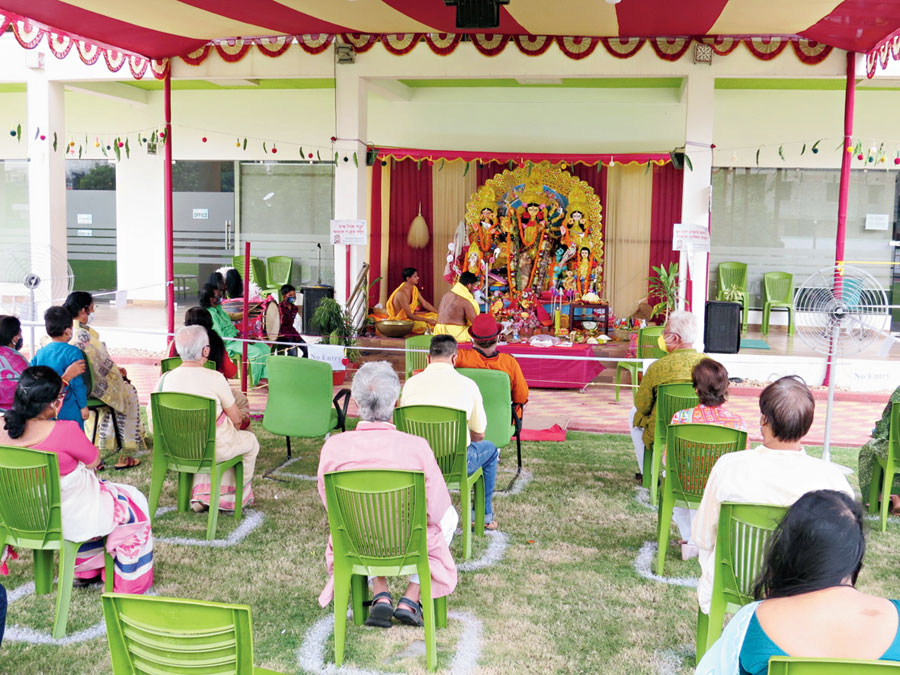 With the source of income so limited, individual members pitched in — some sponsoring the idol, some the bhog on specific days, some picked up the priests’ or the dhaki’s tab — over and above the Rs 500 subscription for individual members.

Another challenge was the lack of helping hands for the priest. “Every year, we enthusiastically take part in cooking bhog and arranging cultural programmes. In fact, during this period, our age seems to reduce, we get so involved in making naru, preparing Sree, chopping fruits, drawing alpona… But barring a few, none could step out this time because of the heightened risk of infection due to various age-related comorbidities,” said Purabi Basu, one of the active members.

One such braveheart was Pratima Singha. The resident of AD Block is a cancer survivor but nothing could keep the ever-smiling retired bureaucrat away from the puja. With her husband Mahesh Kumar Singha, who is also the puja president, she was present on every single day. 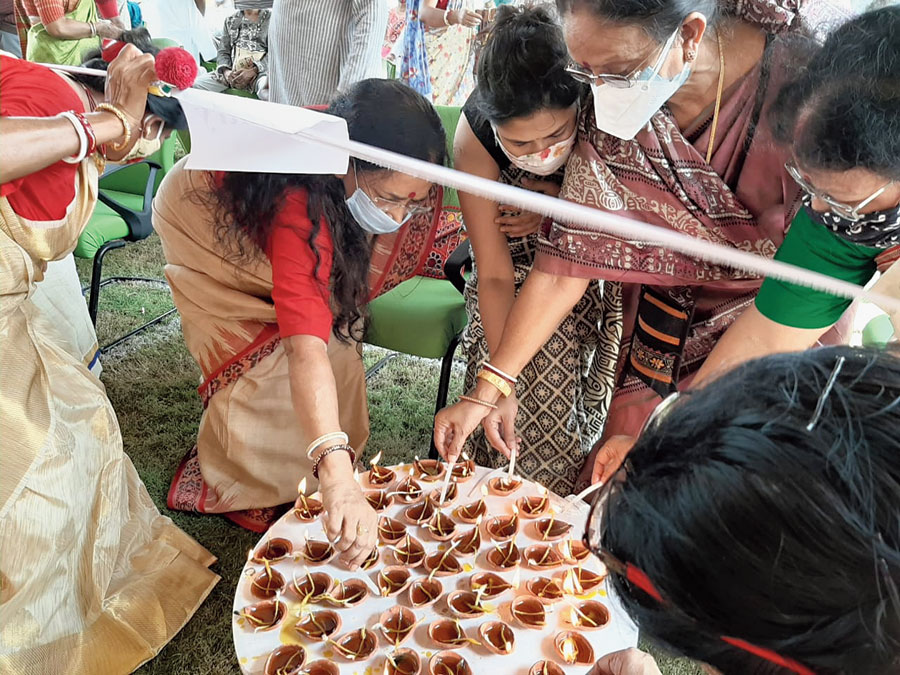 Preparing for sandhi puja on Ashtami

Some residents of Snehodiya also came over. This was Uma Dasgupta’s first puja here. “I came to Snehodiya last October, just after Durga puja got over. I am enjoying the ambience here,” she said, seated in the sun on one of the socially distanced chairs placed in front of the idol.

The only young presence was Jennia Paul. “My father is involved with the puja here. I like it better here than in our own block. So we come here daily,” said the IT professional from CE Block who was seen recording video clips of the rituals and clicking selfies on the lush lawn. 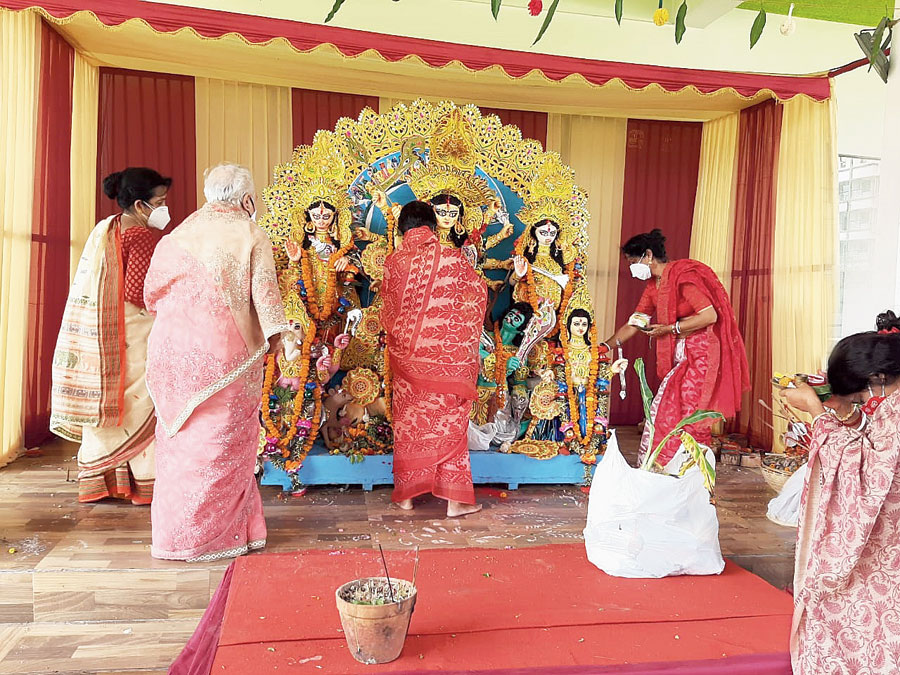 Boron on Dashami
Priests to the rescue

In the absence of helping hands, the priests took up a Herculean task.  “They agreed to cook the bhog and chop the fruits themselves. Otherwise, we couldn’t have managed,” said Palit.

Samiran Chatterjee may be just 27 but he already has 11 years of experience in performing Durga puja. The full-time priest at Nistarini temple in Sheoraphuli is camping here with his assistant Palash Chatterjee. “We are waking up at 3am to get the arrangements ready in time,” they said. Bhog is being offered twice a day. At mid-day, there’s anna (steamed rice) on Saptami, khichudi on Ashtami and pushpanno (pulao) on Navami. At night, we are offering sital bhog — luchi, pithe etc,” Samiran said. 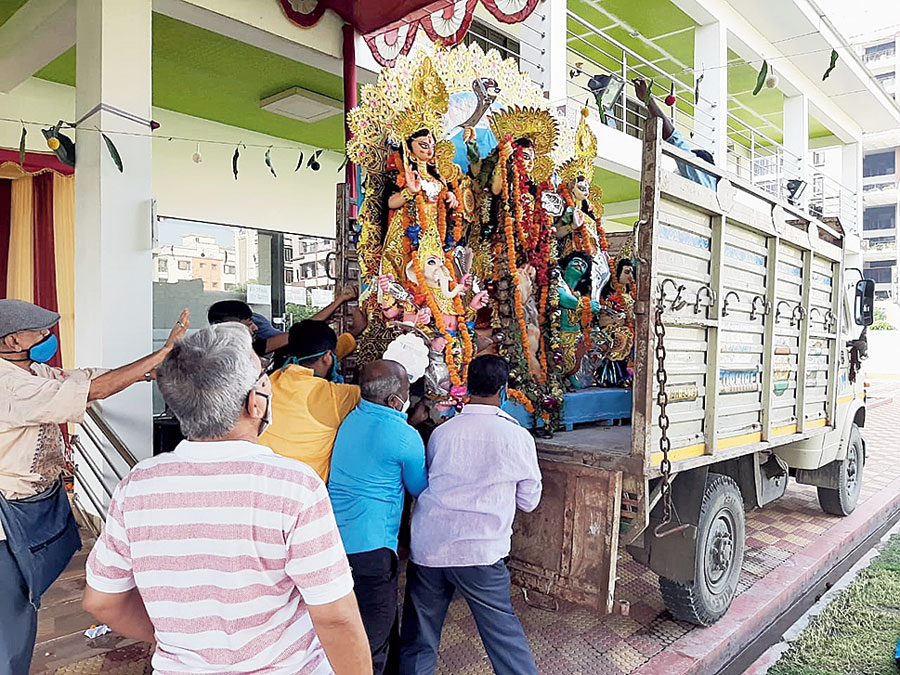 And if there is no cultural programme by members this year, that gap in the schedule too is being filled by the duo. “Palash is a professional singer and a student of veteran artiste Pramita Mullick,” informed Sanat Chatterjee, a resident of Sankalpa 4 who has been getting coached by Palash for two years now. “Our class happens online now,” he smiled.

All those in the audience vouched for the Tagore and Dilip Kumar Roy songs that Palash presented as also the Chandipaath and agomoni songs by Samiran.

The icing on the enjoyment cake was the impromptu dhunuchi dance by the members in front of the goddess, one or two at a time, to the beat of the dhak.