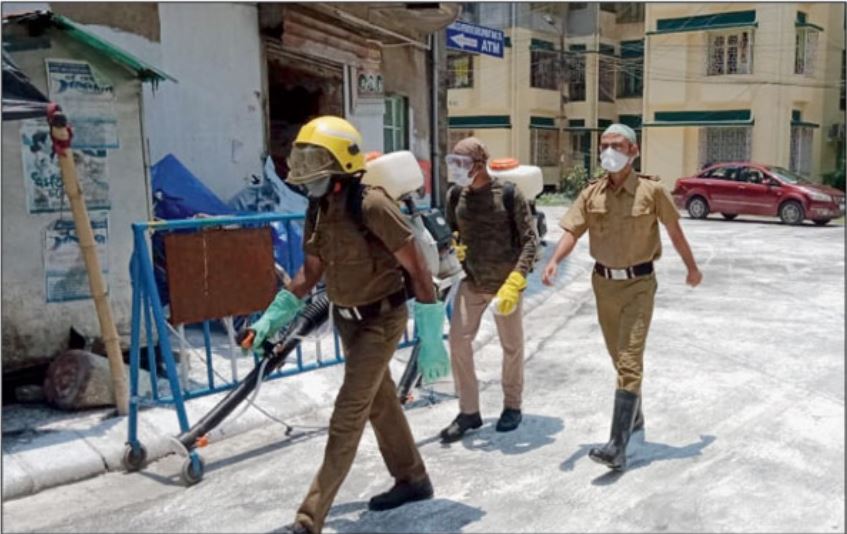 The road in front of Bidhannagar East police station barracks inside the Karunamoyee housing complex being disinfected
Sourced by the Telegraph
Snehal Sengupta   |     |   Published 14.05.20, 04:42 PM

A section of the residents of ED Block in Sector II where a lady constable of the Bidhannagar Commissionerate was kept under isolation at the police barracks on one of the upper floors of the Karunamoyee Municipal Market complex have asked senior police officers to relocate the facility.

As news of the constable who tested positive for Covid-19 on Monday spread among the residents, several sent frantic messages on WhatsApp groups urging everyone to send a letter to the commissionerate asking them to relocate the facility.

A senior officer of the commissionerate said that they would speak to the residents and, if need be, hold counselling sessions for them.

The constable, who used to live in the barracks of the North police station compound, had reported that she was feeling sick a few days ago. Since the barracks there do not have attached toilets, she was shifted to the Karunamoyee facility to self-isolate. Meanwhile her swab tests were taken.

“We admitted her to the hospital the day her Covid-19 report came out positive. Two of her colleagues who used to share the room inside the Bidhannagar North police station with her have also been sent on self-isolation,” said a police officer.

But the officers are surprised and sad at the residents’ reaction.

“From forming WhatsApp groups to delivering medicines and essentials to the elderly, we are doing everything to help the residents of Salt Lake. Most of the people who live here are educated and it is sad that they want us ousted during this pandemic just because a frontline worker is sick,” said the officer.

According to a resident, they were afraid that the pandemic might spread rapidly in the neighbourhood as the barracks are located on top of a market that is frequented by the residents.

Sukanto Mitra, a Karunamoyee resident, said that they wanted the barracks to be completely shut down as the market is barely 10m away from residential flats. On one side, there are the G-type flats of the Karunamoyee Housing Estate while on the other there is Sourav Abasan. There are more than 200 senior citizens who live in these flats, he said.

“Hundreds of residents, especially the elderly, visit the market where a van of the state’s agricultural marketing department pulls up and sells vegetables, fish and meat. We are feeling extremely vulnerable due to this. The cops must leave this place,” said Mitra.

Another resident said that he had spotted the lady constable roaming around the adjoining park and the building itself.

“When we saw her, she was not wearing a mask. She even had tea at the stall near the market’s staircase,” said the resident.

Ranjan Poddar, the secretary of Karunamoyee Samannoy Samiti, said that they would conduct a sensitisation drive among the residents.

“We must extend the police all cooperation as they are on the frontline of this fight. We cannot possibly ask them to leave the barracks during the lockdown. We are trying to organise a joint awareness campaign with the police,” said Poddar.

Bhaskar Sen, a resident of the housing estate’s G Block, however, said that trying to get the barracks moved from the complex during the lockdown was inhuman.

“The cops are at the frontline of this fight. We must try to help them as they are helping us in so many ways. We cannot simply oust them. If someone from our family contracts the disease then will we sever all ties and throw him out of our home?” argued Sen.

On Tuesday, a fire engine sprayed water mixed with disinfectants on all three floors of the market that also houses a co-operative bank while the lane leading to it was sealed off with traffic guardrails.

The Bidhannagar East police station was set up in 2015 on a temporary basis on top of the market complex as the old building near Tank 8 was razed to make way for a new one. The police station shifted in 2018 after the new building became operational but the living quarters stayed put at the market that is operated by the Bidhannagar Municipal Corporation.

New containment zones have come up in Salt Lake — in ESI Housing Complex and KB Block.

Two employees who work at ESI Hospital and live in the quarters opposite Purbachal Housing Estate have tested positive for Covid-19. So has a resident of KB Block central government quarters that also serves as a transit camp of the Indo-Tibetan Border Police.

The CD Block lane where historian Hari Vasudevan lived (he passed away after testing positive for Covid-19 on Sunday) continues to be sealed. His family is on home quarantine. His driver and a family member are suffering from fever and their swab samples have been collected as well.

There are now more than a dozen areas in Salt Lake that are sealed off.