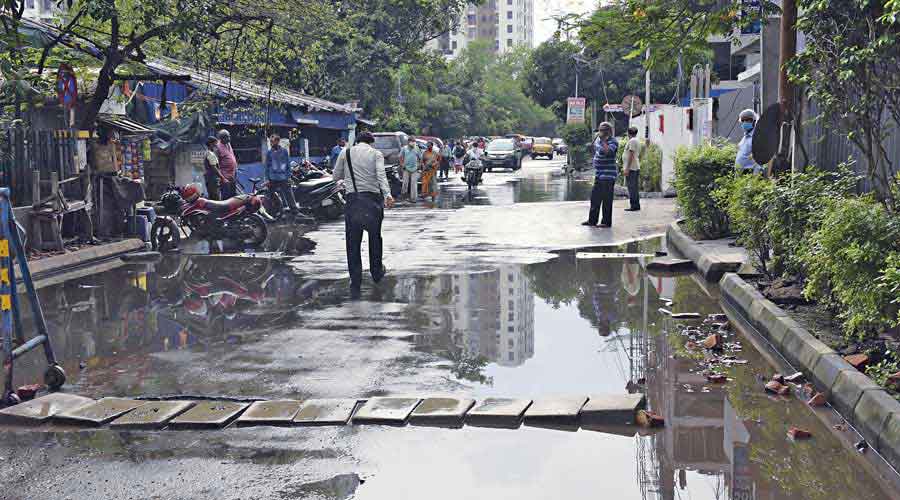 Stretches of roads leading to several big private hospitals in Mukundapur, off EM Bypass, were waterlogged for most of Friday, more than 24 hours after it had stopped raining.

Outside one hospital the stench of sewage filled the air, causing discomfort to patients, their families and the staff. There was water in the parking area of another hospital.

The Calcutta Municipal Corporation blamed Metro Railway construction for the waterlogging. The railway authorities, on the other hand, blamed the state government.

Some of the major hospitals in the area are AMRI’s Mukundapur unit, Medica Superspecialty Hospital, RN Tagore International Institute of Cardiac Sciences (RTIICS) and Sankara Nethralaya.

There was ankle-deep water outside the exit gate of AMRI Mukundapur. An official of the hospital said the situation was extremely bad on Wednesday and much of Thursday.

The entrance to the hospital was flooded and visitors and patients’ family members had to wade through water to enter the hospital.

“Many patients complained to us about waterlogging, but this was beyond our control. We had informed the Calcutta Municipal Corporation. They had deputed personnel who installed pumps to drain out the water,” official said.

“I saw water spilling out of the underground sewer line near the hospital exit. I suspect that is the reason for the stretch being still waterlogged.”

The Telegraph found the canal running along EM Bypass at Mukundapur filled to the brim and plastic, thermocol and other items were floating in the water.

The basement of one wing of a private hospital in the area got flooded and so the authorities had to shift the offices to another wing.

On Friday afternoon, Metro found the parking area on the campus of the RTIICS flooded. An official of the hospital said cars were taking much more time to negotiate their way through the campus because of the waterlogging.

“Because of the waterlogging, cars are leaving the campus at a pace slower than usual. Often a long queue is forming when many cars are trying to leave the campus at the same time. The queue is stretching till the entrance and those waiting to enter the hospital are being held up,” said the official.

The hospital authorities had installed pumps to drain out water from the campus.

Those arriving at the hospital’s emergency department and the Covid vaccination site were the most inconvenienced as both units were on the way to the parking area.

The main road leading to RTIICS from the Bypass, the one running along the Avidipta housing complex, was flooded on Friday afternoon.

On Wednesday and Thursday, the water level on the road was so high that rickshaws and autorickshaws could not move through the stretch. As a result those going to RTIICS or Sankara Nethralaya, located on the road, and did not have a car had to walk through the waterlogged stretch to reach either hospital.

An official of Sankara Nethralaya said patients and their families, and doctors, nurses and other employees of the hospital had been wading through water on the road to reach their campus since Wednesday. Just outside the hospital, the water had receded by Friday morning.

All hospitals have either verbally complained to the CMC or written to the civic authorities complaining about waterlogging over the past few years.

“Two years back, the CMC raised the level of the road but that did not solve the problem,” said an official of a private hospital in Mukundapur.

A senior CMC engineer said that one reason for the waterlogging at Mukundapur was that the canal that drained water out of the area had been blocked in places because of Metro Railway work on the Garia-airport link.

Besides, he said, the underground drains could not be properly desilted before this and last year’s monsoon because of the Covid epidemic. Inadequate desilting reduced the capacity of the network to drain out water.

“There are seven channels of the Tollygunge-Panchannagram canal, which drains out water from Jadavpur, Mukundapur and other areas. Four of these channels are blocked to facilitate the construction of Metro Railway stations and elevated corridors. This has delayed the draining out of water,” said the engineer.

An official of Rail Vikas Nigam Ltd, which is executing the Metro projects across Calcutta, said they received permission to start work two months back.

“Some of the Metro piers are constructed on channels, so they have to be partially blocked. If we had received the permission earlier, work could have been completed before the monsoon,” said the official.

He said the blockades would be removed in a couple of weeks.