The NKDA did shift the vegetable and fish sellers to an empty plot behind CNCI to avoid crowding in mid-April. But the cyclone blew off all the structures. 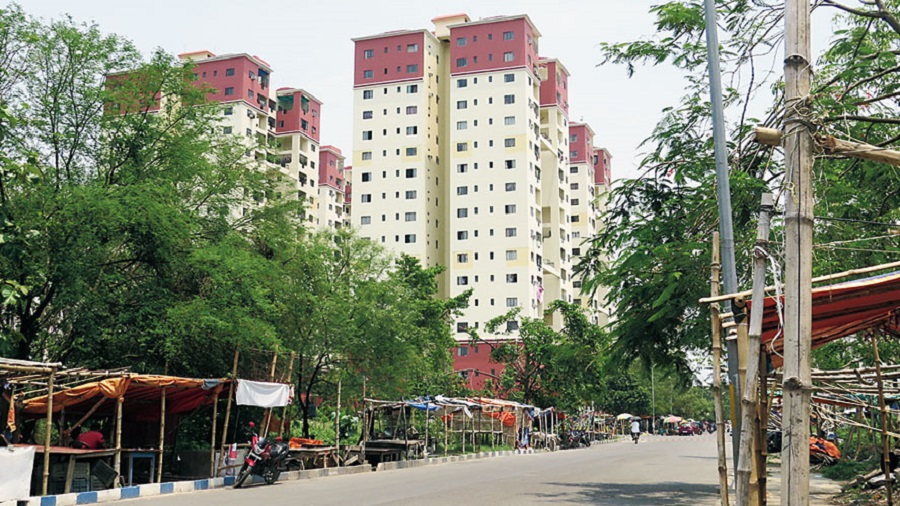 There has been a marked rise in the number of stalls in the vicinity of Greenfield Heights in Action Area III in recent times. Residents of the highrise complex, popularly known as Athero Tola, allege that the number has especially increased after the Amphan cyclone.

“We do not have an NKDA Market in the area. Till about a year and half ago, the shanties were bordering the wall of the Chittaranjan National Cancer Institute (CNCI). Now more have come up along our boundary wall. The area is becoming as congested as Dharmatala,” said Supriyo Chaudhuri, a resident.

Rajdeep Ray shudders at the thought of such a bustling illegal bazar beside a Covid-19 treatment centre. “Even at the height of lockdown, the adjacent tea and fast food stalls here used to stay open. Many a time, ambulance drivers after dropping off patients used to gather there. We had to repeatedly lodge complaints,” he says. 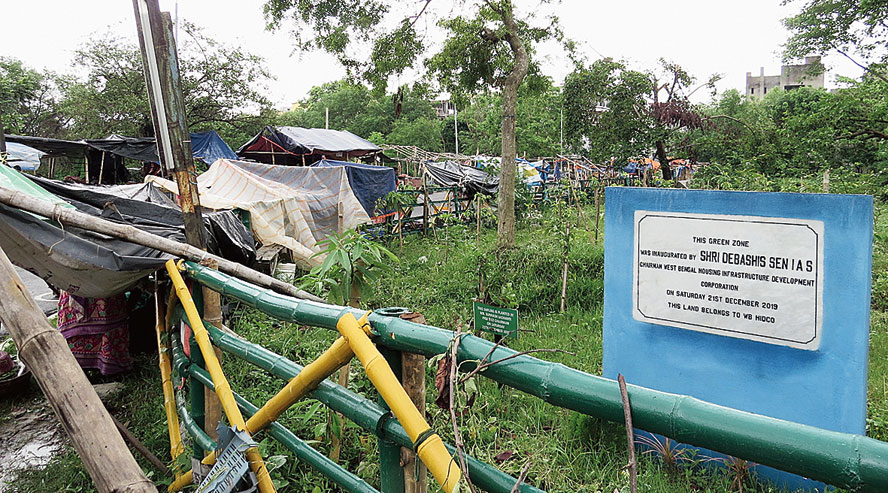 The NKDA did shift the vegetable and fish sellers to an empty plot behind CNCI to avoid crowding in mid-April. But the cyclone blew off all the structures.

“Tin urey gyachhe. Ek hnatu jol. Pocha joler modhye customer ashbe?” complained Sajan Dhali, a fishmonger sitting on the road with his stock of pabda, pomfret and aad with his back to the Greenfield Heights boundary wall. He was one of the sellers who had shifted to the makeshift market but was back on the street the Sunday after the cyclone. “I am sitting here for six months now. In between, they sent us to the field adjacent to the Narcotics Control Bureau residential complex. Setting up this place has cost me Rs 2,000 in bamboo and plastic,” he said.

Residents allege that the new stalls were encroaching even into the bamboo fencing erected on the pavement along their boundary wall. In May, on seeing fresh construction coming up, the residents’ association had tried to reason with the builders. “A big fruit shop had come up right next to the gate. We spoke to a man fixing poles right next to it to make another stall. He had already broken our fencing. At least, he agreed not to encroach further into the pavement,” said Debarati Bagchi, one of the earliest residents of the complex. “When we came in 2008, the road was not metalled, streetlights were missing and there were just one or two stalls. We used to go to Salt Lake for necessities.”

Even then, Debarati was against the shanties. “My husband and I had campaigned door-to-door. We knew they would proliferate if allowed to remain. But many neighbours favoured retaining them for convenience’s sake,” she recalled.

The newest stalls have mushroomed along an empty plot designated a green zone, according to a foundation stone which bears the inauguration date December 21, 2019. Abdul Rejjak Molla opened a lottery counter on June 14. His stall is the first one to the left of the approach road if one were to walk towards the Greenfield Heights-CNCI crossing. “I run a fast food shop called Ekramul Fast Food Centre in the old market. But there are no customers now. So I had to think of something else to make ends meet.” He wanted to sell fish but was short of funds to buy a wooden platform to display the ware on. A small table and a bench are all he has in the stall. “Wish NKDA did something for us,” he sighed, on being told that many residents were unhappy with the new encroachments. 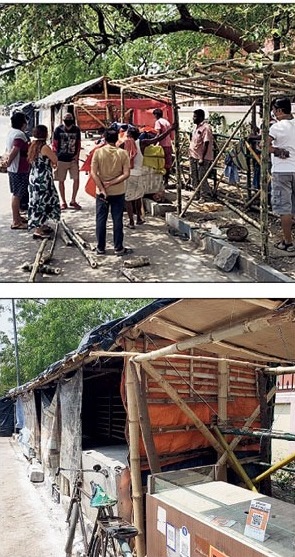 Greenfield Heights residents object to a new stall being constructed along the complex wall on June 4. (Below) The stalls eat into the barricaded pavement garden
Sudeshna Banerjee

NKDA chairman Debashis Sen said there were plans for a project which would accommodate some shops, but not all. “There are so many shops there that it would require a shopping mall to accommodate them all, and we have no intention for building a mall.” But the project might not happen at the plot where they had been shifted. “It is a costly plot and the relocation was a temporary measure.” Asked about the mushrooming of stalls, he said no encroachments would be allowed. “We undertake (eviction) drives every now and then. I will ask our officials to check.”

Have encroachments taken place in your area during lockdown?
Write to The Telegraph Salt Lake, 6 Prafulla Sarkar Street, Calcutta 700001 or email to saltlake@abpmail.com