Nets to stop bikers from falling off flyover 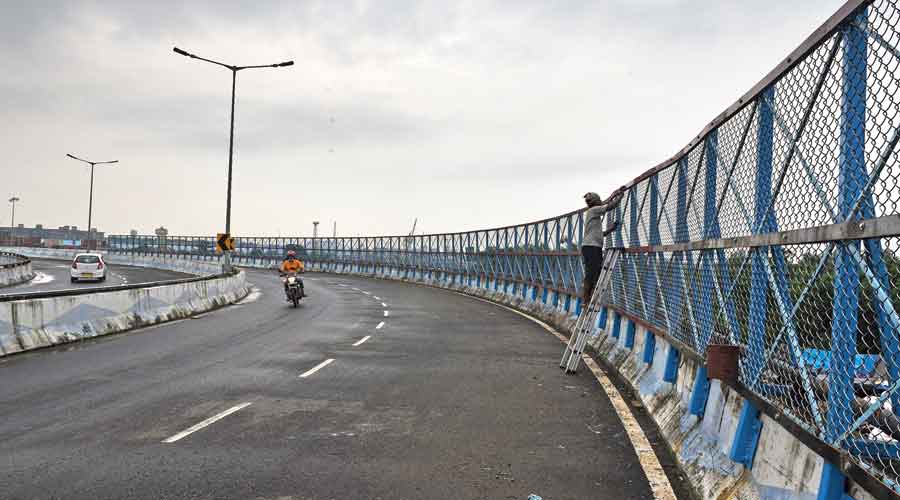 Steel nets mounted on iron frames are being fixed on the crash barriers of Garden Reach flyover to prevent two-wheeler riders from being flung off the bridge during a crash.

In June last year, three youths were flung off the flyover on impact when they rammed into the crash barrier at a sharp bend. They fell on a container lorry parked on the road below. None had a helmet at the time of the accident.

Police and the Calcutta Metropolitan Development Authority (CMDA) had been thinking of ways to prevent a repeat of such an accident. Two-wheeler riders speeding on the flyover and ramming into the crash barrier at sharp bends is common, a police officer said.

“We are installing steel nets along 540m on the flyover at sharp bends. The nets are 5.9ft high and strong enough to withstand the impact of two-wheeler crashes,” a CMDA official said. “The nets are being fitted on the crash barriers, which are 2.5ft high from the road surface.”

All the nets will be installed by the end of this month. The installation will cost about Rs 34 lakh, another CMDA official said.

The nets are being installed on the stretch of the flyover above City of Joy fuel pump and the office of Paharpur Cooling Towers, the police officer said.

The flyover has a clearance of 12m from the ground below at one place, where a freight corridor has been planned, a CMDA official said. The nets are being installed there, too.

“There are tracks running the flyover on a particular stretch. Usually, a flyover is built 6.5m above the ground where there are tracks,” the CMDA official said.

“But on one stretch the height of the flyover is 12m from the ground because the rail authorities okayed the construction only if the height was maintained. They have planned a freight corridor at that place,” the official said.

The 4.4km-long Garden Reach flyover was thrown open to traffic in March 2018. It connects Majerhat with the Brooklyn crossing, about 800m from the Ramnagar crossing in Garden Reach.

Unavailability of land to place the piers of the flyover had forced the CMDA to design the flyover in a way that included some sharp bends, the official said.