Police suspect some traders may sell on the sly 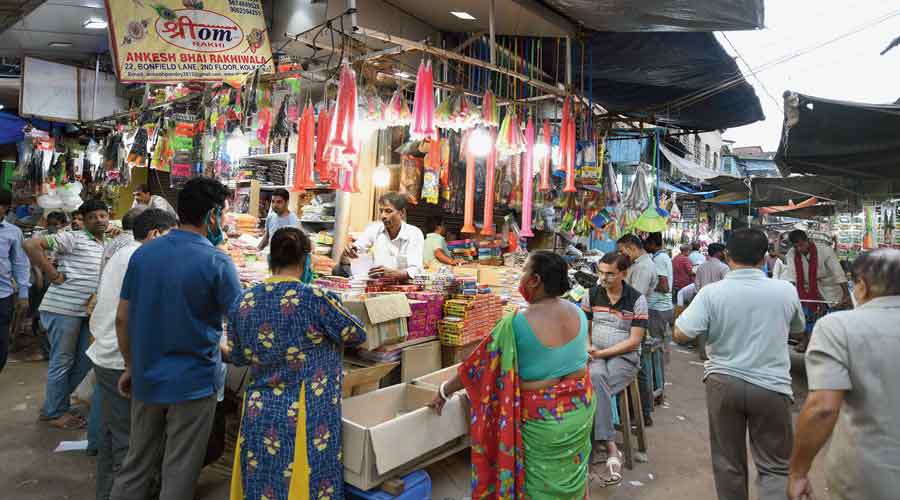 Canning Street, Brabourne Road, China Bazar, Behala — the traditional pockets known for the sale of firecrackers in the city were selling only candles on Friday.

Shopkeepers said firecrackers were being sold at these places till Thursday evening. But the boxes vanished once news of the high court order imposing a blanket ban on firecrackers spread.

“Sab shoriye diyeche (all firecrackers have been removed),” said a shopkeeper pointing towards a candle seller on Canning Street.

Traders said they had seen an increased presence of police officers in the Posta-Burrabazar area from Friday morning.

The police said they would seize firecrackers as soon as they spot them — from shops selling them or individuals found in possession of them. In south Calcutta, police stations are planning to hold meetings with residents and guards of highrise buildings to ensure the ban is complied with.

In north and central Calcutta, the police said they had started collecting information whether any shop was selling firecrackers.

The high court on Thursday prohibited the sale and use or display of any form of firecracker because of the Covid-19 pandemic and the adverse effect smoke generated by crackers could have on the air we breathe.

Covid patients find it difficult to breathe anyway. Air heavy with noxious fumes will make life all the more difficult for them, public health specialists have warned.

The order by the division bench of Justices Sanjib Banerjee and Arijit Banerjee says: “The police should maintain a strict vigil to ensure that there is no sale or purchase of firecrackers of any form in the State between now and the end of the month. The police should make every effort to confiscate firecrackers and any kind of like material which have the potential to pollute the air. Immediate appropriate measures must be taken by the police against those seeking to act in contravention of these directions.”

Several police officers said that as many sellers had procured firecrackers before the court imposed the ban, they would possibly try to sell them on the sly. Traders in central Calcutta usually buy their stock from manufacturing units in Champahati and Nungi in South 24-Parganas.

“We are trying to track the potential sellers,” said an officer in central Calcutta.

Every year, police allegedly half-heartedly try to crack down on illegal firecrackers — those that produce more than 90 decibel of sound at 5m from the source — by searching shops and vehicles and also by keeping an eye on highrise buildings from where the maximum number violations are reported.

This year, the implementation of the ban would be easier as the police will not have to differentiate between illegal and legal firecrackers.

“We will meet residents of highrise buildings and assign the responsibility of abiding by the court order to residents’ association or the guards. We will ask them to report the matter directly to us if residents violate the order,” said an officer of Shakespeare Sarani police station.

Cops may be deployed in some of the highrises to ensure the court order is followed.

Residents of several highrise buildings have resolved to make this Diwali pollution free. Shankar Lal Agarwala, a resident of Satyam Towers in Alipore, said bursting firecrackers had been an integral part of their Diwali celebrations every year.

“But that should not be at the cost of the health of thousands of Calcuttans. This year we will light only diyas,” Agarwala said.

At South City, a notice has been issued banning firecrackers on Diwali. “If anyone violates the court order, it will be reported to the authorities,” said a member of the managing board of the Prince Anwar Shah Road housing complex.