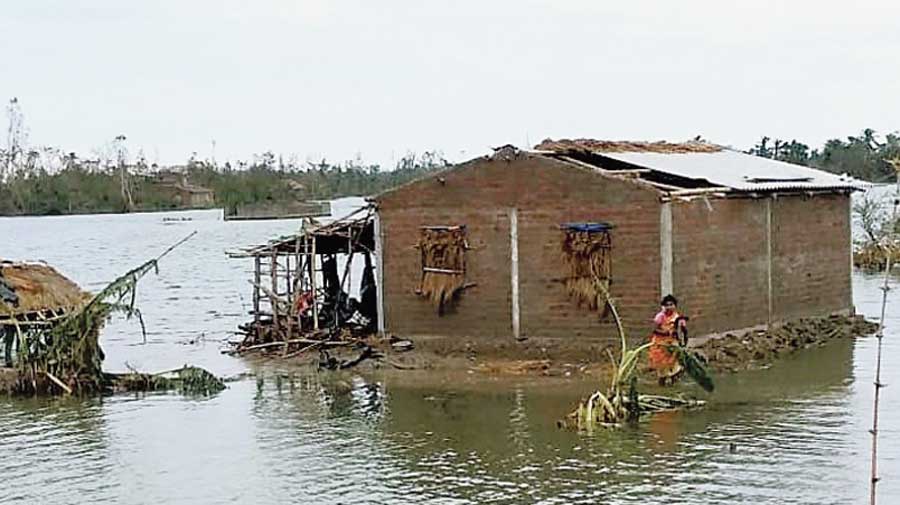 Jadavpur University’s batch of ’91 of the department of electronics and telecommunication engineering has raised Rs 25 lakh that would be used to rebuild houses in North 24-Parganas that were damaged by Cyclone Amphan.

The money will initially go to Baliadanga village in the Hasnabad block.

Four batch mates who had launched the initiative - Chittralekha Dutta, Surjodipta Dutta, Arup Chakrabarty and Abhik Mukhopadhyay – visited the campus on Friday along with the five  villagers who will be handed the houses on the occasion of the Bengali New Year in April.

They met vice-chancellor Suranjan Das to discuss the initiative.

“The scale of devastation is so huge that it is imperative that the help is provided from as many quarters as possible. We had got in touch with the 36 students of our batch last July,” said Abhik Mukhopadhyay, now a professor of computer science and engineering at IIEST, Shibpur.

Siddhartha Sengupta, who had graduated from the department of construction engineering in 2011, is helping the house-building project with his expertise. Each family will get a pukka house comprising one living room-cum-bed room, one kitchen and one toilet.

“We needed someone who has expertise in building houses that can survive adverse weather conditions,” said Mukhopahdyay.

Project CHHAD (roof) aims to build 500 houses in the next two years.

“The students of Jadavpur University believe in the motto of giving back to society. So we have decided to help out the villagers in their hour of distress. We aim to create a scalable and sustainable model as opposed to one-time donation,” said Chitralekha Dutta, who works in IBM.

Teachers of the university had in June last year raised Rs 2.02 lakh and transferred Rs 1,000 to each student from the Sunderbans to help them in the post-Amphan distress. Students, too, raised resources and delivered essentials such as rice and pulses to their friends in distress.

The batch of ’91 came to know about the scale of devastation inflicted by the storm from the students who have been running a community kitchen in the Sundarbans. “We visited Baliadanga village and other areas to assess the situation,” said Mukhopadhyay.

Bijoy Ghosh, a resident of the village said, they had received a tarpaulin sheet and other help from the local panchayat but the houses had not yet been rebuilt.

“We will have a shelter of our own now,” said Bijoy, who came to JU on Friday.

VC Suranjan Das said: “This bonding at the time of crisis is setting an example.”