Guardrail a source of danger in Calcutta

Last week, a biker knocked down a pedestrian and then fell off the vehicle after failing to negotiate through the space between a guardrail and a bus on the Prince Anwar Shah Road-EM Bypass connector 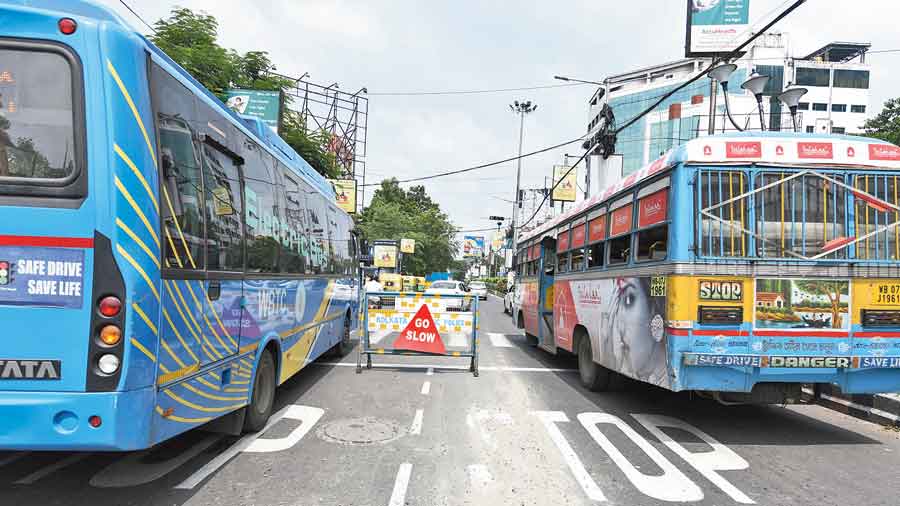 Guardrails that police place on Calcutta's roads to check vehicles at night or to facilitate traffic diversions through the day have emerged as potential dangers as many of them are not removed even when they serve little purpose.

Last week, a biker knocked down a pedestrian and then fell off the vehicle after failing to negotiate through the space between a guardrail and a bus on the Prince Anwar Shah Road-EM Bypass connector.

The biker, while trying to make room for the speeding bus, veered towards the footpath and hit the pedestrian. “The guardrails narrowed the space on the carriageway and the bus sped past us,” recounted a man who was riding pillion on the bike.

Guardrails that are placed for night checks are usually removed by the morning. Senior police officers at Lalbazar said that at some places,

especially near busy intersections, they were not removed in the morning because they also served the purpose of streamlining vehicle movement.

The Telegraph toured the city and saw that at several places guardrails contributed little towards streamlining traffic and caused immense inconvenience to commuters.

Prince Anwar Shah Road connector: Two guardrails were spotted on the connector, near the Garfa Main Road intersection. One of them was on the Stop Line. Vehicles were having a tough time making their way through the space between the two.

Along the entire stretch, such barriers were spotted along one side of the road, eating into the road space.

EM Bypass: On many stretches on the thoroughfare, guardrails were spotted before or after the Stop Line on one side. They were neither slowing down traffic nor facilitating crossing of the road by pedestrians.

Ahead of the Peerless intersection from the Ruby crossing, a guardrail stood in the middle of the road just before a signal post.

When the signal turned red, vehicles slowed down

before coming to a halt. A few cars crossed over from east to west. The signal turned green and the vehicles, including a bus and small cars, moved from north towards south.

“A car will stop anyway when the signal turns red. One doesn't need a guardrail to enforce that. If managing pedestrian movement across roads is a problem, the police can use ropes. What’s the point in installing guardrails,” said a motorist waiting at the signal in his car.

SP Mukherjee Road: A guardrail was placed in the middle of the road ahead of the Rashbehari crossing from Hazra, just where vehicles are supposed to stop at a signal. When the light turns green and vehicles from behind start moving, drivers suddenly realise there is a guardrail in the middle. They have to veer to the left or right, resulting in chaos.

Another guardrail stood in the middle of the road near the crossing leading to the Kalighat temple.

The police said that at both locations, the guardrails were meant to alert motorists about a pedestrian crossing point. Motorists said a traffic signal did exactly the same job and guardrails only ate up the road space.

Rashbehari connector: At the intersection of Swinhoe Lane and BB Chatterjee Road, near the Bijon Setu approach, a police console maintains the signal and sergeants are present most of the time to ensure there are no traffic violations.

Ahead of the signal stood a guardrail on the Stop Line with the words "Go Slow" written in white on a red board.

“Why do we need a guardrail to tell us to go slow? One just needs to follow the traffic signal. When lights turn yellow, vehicles slow down,” said a biker.

Central Avenue: At the Colootola Street intersection, there are three guardrails. One was installed across in the middle of the road, ahead of the Stop Line, and two others were placed parallel to the pavement on one side. Vehicles have to slow down considerably to pass through the narrow space between the guardrail in the middle of the road and the ones along the side.

Policespeak: “There are three reasons to put up guardrails — to slow down traffic, to warn motorists where the road is in bad shape and to alert motorists at crossings,” said Arijit Sinha, deputy commissioner of police, traffic.