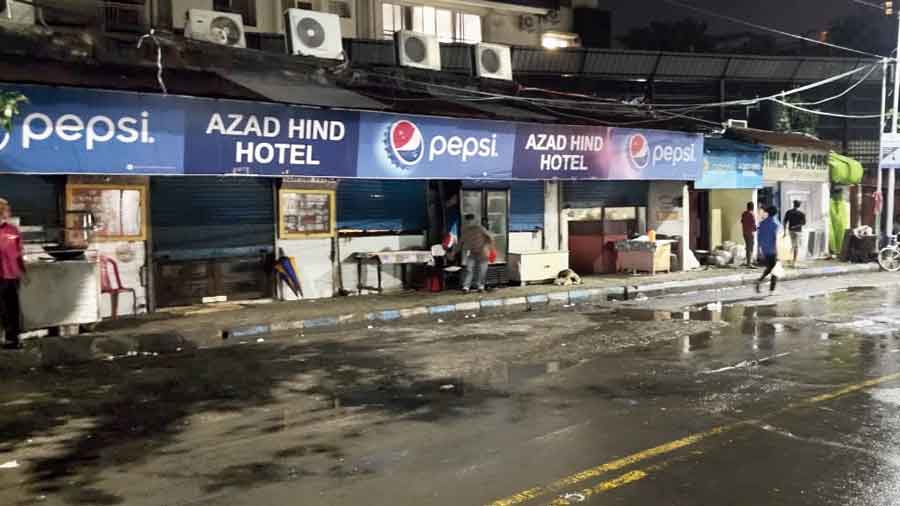 One of the two dhabas that Metro reported about closed for customers at 8.12pm on Tuesday. Only the take-away counter was allowed to operate for online food aggregators.
Telegraph picture
Our Bureau   |   Calcutta   |   Published 28.07.21, 01:54 AM

The chief secretary on Tuesday asked all police commissioners, police superintendents and the excise department to step up vigil on all major thoroughfares to ensure strict compliance of the 9pm-to-5am curfew, which is imposed every night to contain the spread of Covid.

A senior bureaucrat said chief secretary H.K. Diwedi said at a meeting how the night curfew was being flouted and stressed the need to stop it immediately.

“He said unless close watch is kept on the Covid situation, things may again spiral out of control,” the official said.

The instruction came on a day Metro reported how diners drove in throughout the night at dhabas on Ballygunge Circular Road. Metro saw over two weekend nights food being served to people in cars and in the dining areas inside the eateries well past 9pm — when no one should be on the roads except those in medical emergencies or engaged in essential services.

“Sir (chief secretary) was very clear. He said it has been observed that restrictions imposed from 9pm to 5am are being flouted with impunity in most districts, by the public and commercial establishments like restaurants. He requested the police chiefs to deploy flying squads and naka checking on all major thoroughfares to ensure compliance,” the officer said.

According to the night curfew rules, people are expected to stay indoors from 9pm to 5am and those caught flouting the rule are to be prosecuted. Hotels, restaurants and eateries are to be closed by 8pm, as part of Covid curbs.

Hours after the directive, Metro on Tuesday evening called one of the two dhabas that were serving food on Friday and Saturday night, asking whether a table could be reserved for a group of four later in the night.

“We will not serve food after 9pm,” the person who answered the call said.

Asked if they would serve in the car, the person said: “We will deliver only through... (he named two online food aggregators).”

Officers of the East traffic guard on Tuesday downed the shutters of the eateries at 8.12pm, citing the Covid-19 restrictions. “Only online delivery services will be allowed,” an officer said.

An officer at Lalbazar said: “Only the take-away counter (of an eatery) can operate during the curfew period. People are not allowed to step out and go to a take-away counter to collect food. Only online delivery, which has been included in emergency services, is allowed between 9pm and 5am.”

On Friday and Saturday, the nearest police personnel Metro spotted was near Ballygunge Phari, about 1.5km from the dhabas. They stopped some vehicles and sought explanations.

The dhabas were happily serving food to whoever came.

Senior officers of Calcutta police said they had been instructed on Tuesday to tighten the security checking at night and ensure that “everything” was closed by 9pm.