The coast guard, the navy and the air force established separate control rooms to coordinate with the state government 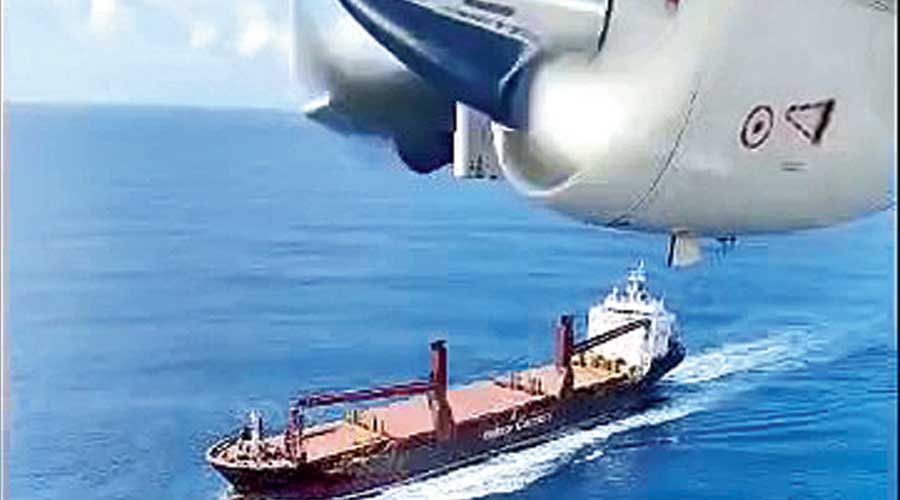 A merchant vessel spotted by an Indian Coast Guard surveillance team along Bengal’s coastline, between Haldia and Frasergunj in South 24-Parganas, on Sunday. Coast guard aircraft sent warnings to fishing boats and merchant vessels to return to the shore because of approaching cyclone.
The Telegraph
Kinsuk Basu   |   Calcutta   |   Published 24.05.21, 01:26 AM

The Indian Coast Guard has spotted at least 12 fishing boats and six merchant vessels that are yet to move ashore. Officers said the boats and the vessels were between Fraserganj and Haldia.

Aircraft of the coast guard were hovering over parts of the Bay of Bengal, conducting surveillance and spotting vessels away from the shore, as part of the preparedness for Cyclone Yaas. The storm is likely to make landfall on the Odisha-Bengal coasts on May 26.

The coast guard, the navy and the air force established separate control rooms on Sunday to coordinate with the state government.

Senior officers of the coast guard said they were sending out alerts from Dornier helicopters and the Radar Operating Station in Haldia to the 12 fishing boats and six merchant vessels asking them to return to the shore.

“Merchant vessels. This is the Indian Coast Guard. There is a weather alert from the IMD (India Meteorological Department). A deep depression has formed over the central Bay of Bengal and is moving north,” officers on board the aircraft kept transmitting the message to the boats and the vessels.

“It is likely to develop into a cyclonic storm. It is going to hit the coasts of Odisha and West Bengal. All merchant vessels operating in the area and in anchorage are requested to exercise caution and take necessary precautions.”

Officials said besides the Dornier helicopters, at least six ships were out in the sea to send out alerts to fishing boats, trawlers and other vessels along Bengal’s coastline between Digha and Frasergunj.

“We have readied disaster relief teams to swing into action. The deployment of these teams is being finalised in consultation with the district magistrates,” said a senior officer of the coast guard.

“We are in touch with Nabanna and teams will be deployed at Sagar Islands, Digha and Diamond Harbour, following requests from the state government,” said a senior officer of the navy.

“Four ships loaded with relief materials and medical teams have been kept ready at Visakhapatnam for post-cyclone relief.”

Along with this, the navy has kept ready helicopters and long-range aircraft in Visakhapatnam and Chennai. Officials said they had been kept on “stand-by” for aerial survey and emergency evacuation.

The navy has set up a cyclone control room at INS Netaji Subhas, the naval base in Calcutta, to monitor the cyclone and its aftermath along Bengal’s coast.

The air force on Sunday airlifted over 300 National Disaster Response Force personnel from Patna and Varanasi and 21 tonnes of equipment for relief operations. Senior officers said nine aircraft, including three C-130s and two Dorniers, had been kept ready to respond to any emergency call for relief and rescue operations.