Watchman on the waterfront

Lives of Others: Story of an activist from a storm-ravaged place 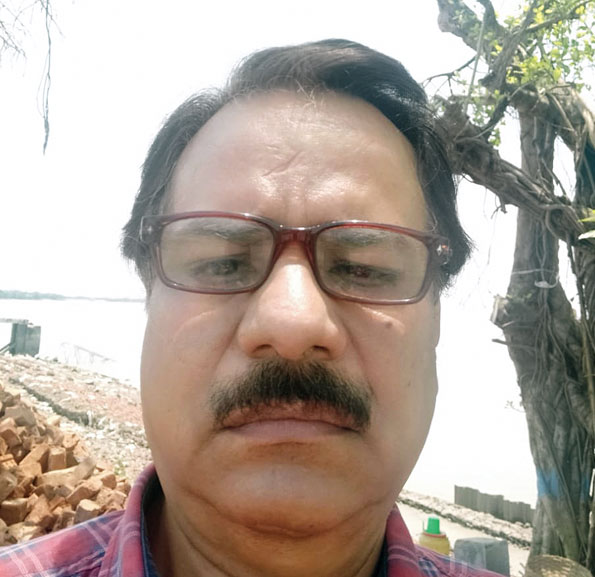 As a young boy growing up in his uncle’s house in Behrampore in Murshidabad district in the sixties and seventies, Debashis Chaudhury could not help getting caught in a cross-current of ideas. His uncle Soumendra Kumar Gupta, known for his radical views, taught political science at Behrampore Krishnanath College. Naxalbari, which was not far away, had just happened. All around Chaudhury were scholars, writers and activists, dreaming of a new world. Chaudhury would never engage directly with a political movement, but he was baptised by fire.

Today, at 62, he still tries to give shape to those ideas, far from Behrampore and his childhood, in Diamond Harbour. After earning his masters degree in botany from Ballygunge science college, Chaudhury landed up at Diamond Harbour as a teacher of biology and life science at Sarisha High School. Diamond Harbour in South 24-Parganas, once an important harbour town for the Potuguese and the British, now serves as a gateway to the Sunderbans and is a local tourist destination. Here, the Rupnarayan joins the Hooghly to be met by Haldi further down and the three join to run into the sea in the Sunderbans further south.

“I came here and stayed on,” says Chaudhury, a modest man with a smiling face. The town became his mission. He is a Diamond Harbour activist. Just before the lockdown, he was working hard to build a campaign against the CAA and NRC.

Chaudhury points at the river. Cyclone Amphan has breached the embankment on the Hooghly at Matsabandar near Diamond Harbour for about 200 metres. Last year, the main tourist attraction of the town, the promenade on the riverfront that is also part of the main road, had been threatened with collapse by a state government project to build a hanging bridge there.

“But hardly any repair has been done. A disaster may still be waiting,” says Chaudhury about the battered stretch. “Though what the eye can see is very little.”

Diamond Harbour town lies ravaged with its houses roofless and without walls. In the villages the destruction is unbelievable. And Covid is raging. “For so long governments in Bengal had been told to decentralise power more effectively. A strong local government would have helped in people’s participation in health infrastructure. Who even knows about the Gram Samsad now?” asks Chaudhury.

But Diamond Harbour was never really pretty. “I came here in 1981. The town was always in a state of collapse, irrespective of who was in power,” says Chaudhury, who retired from his job in 2018.

One of the first things that he saw was the large spurt of ‘video-halls’ in the early 80s showing blue films. “There were about 20/22 such halls in the town itself and schoolboys were making a beeline for these.” These were closed down, as were some hotels that were being used for prostitution, after intervention from Chaudhury and other activists.

“I was never directly engaged with a political group,” Chaudhury stresses. “But Naxalbari had opened a door. And at that point the science movement was working in a parallel way.” Movements come together. Science, also, is a great agent of change.

In those days Chaudhury would distribute a science journal called Utsa Manush in Diamond Harbour homes.

Wherever he looked, problems had piled up. “Water in Diamond Harbour is undrinkable. It has always been so. Not many here drink the water supplied by municipality,” said Chaudhury. “Just the other day, my wife pointed out snails in the water. So everyone buys 20-litre jars of bottled water, the quality of which can also be questioned in many cases,” said Chaudhury. His wife is a schoolteacher and the couple have two sons.

Chaudhury filed a petition against authorities on the issue of unsafe and unclean drinking water at the high court in 2017, but the case has only had one hearing so far.

For Janakalyan Samitiand Chaudhury, the local bridges are another important issue.

Diamond Harbour is a town of bridges. These, joining parts of town and often entire areas over water bodies that abound in this part of Bengal, are vital to life here. Some go back to the British era. Many of them have collapsed, or are about to.

“Natunpole is the bridge that connects Diamond Harbour with Kakdwip in the Sunderbans. It has been in very bad shape for long, but recently it was ‘repaired’ with only a coat of plaster,” said Chaudhury. Same for Lalpole, a British-era bridge, a little distance from Natunpole. “It has collapsed. But still people are using it, clearing a space on the side. That is another disaster waiting to happen.”

The Mograhat Canal, over which Natunpole was built and which acts as an irrigation canal for a large area around Diamond Harbour, has not been cleaned since 1967, said Chaudhury. He has filed more than a hundred RTIs so far, individually and on behalf of organisations, but has got only about seven or eight satisfactory replies.

Not that he has been rewarded grandly for his efforts in fact the opposite has happened at times. Once he had begun to give extra lessons to students at the higher secondary level. The idea was also to hit at the root of the private tuition racket that flourished there. He was harassed and beleaguered for his effort.

“We have our limitations,” said Chaudhury. “Not all of us can give up our jobs. But one of the things I always remember is if you don’t try to change society around you, society will change you.”