Many other areas in the city will be cleared of such wires, said MSOs and broadband service providers 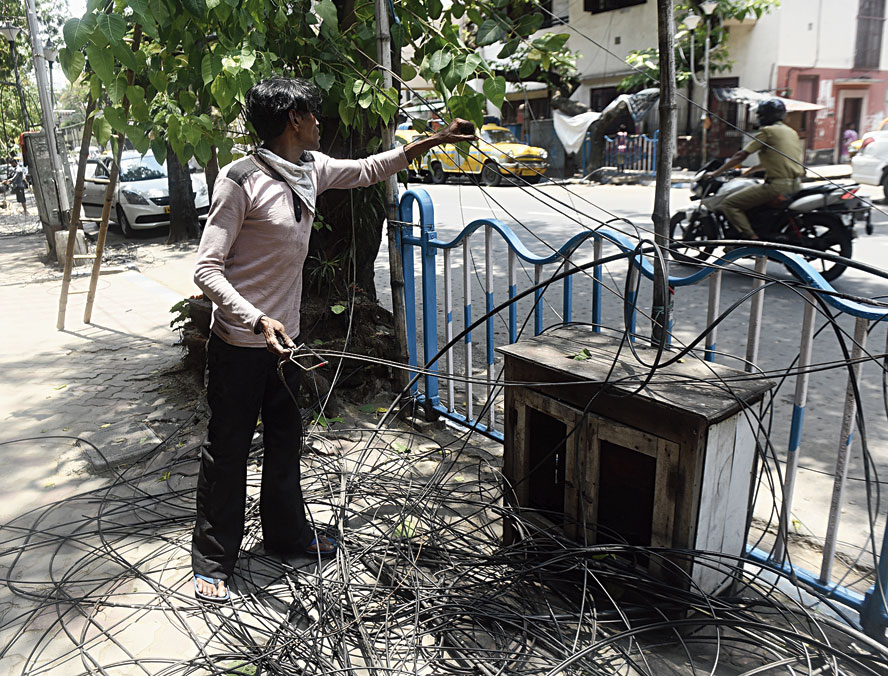 More than 10km of dud cables were removed from posts on just one stretch of Harish Mukherjee Road on Thursday.

Many other areas in the city will be cleared of such cables, said multi-system operators (MSOs) and broadband service providers.

The push came at a meeting on Tuesday between the operators and Firhad Hakim, the chairman of the Calcutta Municipal Corporation’s board of administrators. Sources said Hakim had a stern message for the operators — remove the defunct cables as soon as possible.

Old cables that have long outlived their utility have been dangling from posts, all jumbled up, for years. Civic officials have attributed the high count of electric poles felled by Cyclone Amphan to the weight of cables on them.

Around six MSOs and a couple of broadband providers sent teams to Harish Mukherjee Road on Thursday morning. They worked well into the afternoon but could only cover a portion of the road.

“We covered around 20 lamp posts from Mitra Institution to Balwant Singh Dhaba,” said Niloy Sarkar, a worker in the team of GTPL-KCBPL.

The process took time because the workers found it tough to tell a defunct cable from a functional one.

The total length of the defunct cables removed from the road would be “well over 10km”, said Suresh Sethia, the director of Siti Cable.

Stretches in Alipore will be taken up after Harish Mukherjee Road is free of defunct wires, MSOs said.

A senior official of another MSO said at least 100 trucks would be needed to carry all the dud wires from the city.

Removing dud cables is a baby step towards fixing the overhead menace, said civic officials and urban planners. The real solution was building underground conduits, they said. But the job is easier said than done.

Metro had in May 2019 reported that the CMC had readied a plan to bury the mesh of dangling cables. But the project never took off.

“Late last year, the plan was sent to the state government for approval. The money was supposed to have come from the government, not the civic body. The approval is still pending,” said a CMC official.

Architect and urban planner Abin Chaudhuri said it was ironic that it took a calamity for people to take notice of the overhead cable menace.

“During normal times, we insist the local cable operator draws a cable through that very mess. We are also to blame,” he said.