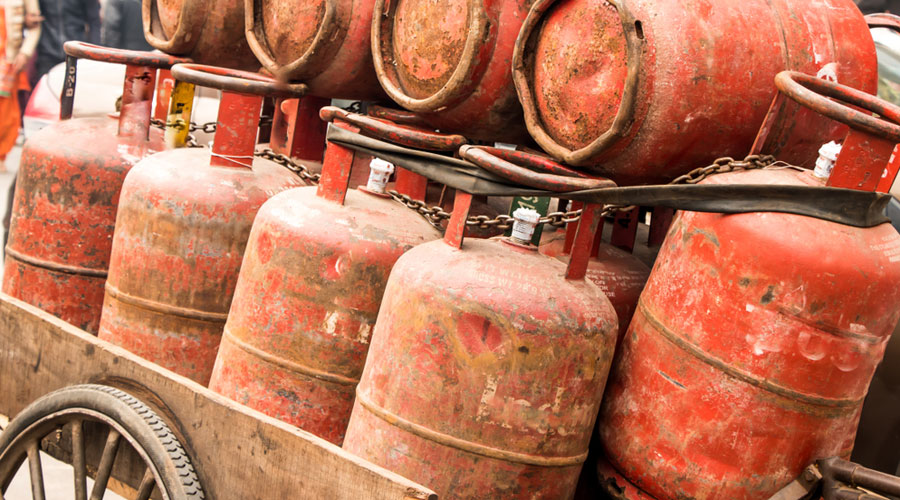 A message from the IOC with a request to drive up sales reached distributors through WhatsApp this week.
Shutterstock
Sanjay Mandal   |   Calcutta   |   Published 16.09.20, 04:31 AM

Domestic LPG consumption in and around Calcutta has dipped over the past few months because of Covid-19, a number distributors of Indian Oil Corporation (IOC) said.

Many distributors said the demand for refilled domestic LPG cylinders had gone down by more a thousand a month in their respective zones. A message from the IOC with a request to drive up sales reached distributors through WhatsApp this week.

“Dear All Distributors: Industry growth in the month is 2 percent whereas growth of North 24-Pgs (-)10.5 percent, Kolkata (-)3 percent, South Kolkata (-) 2.23 percent. Pls come up. Check last 3 months’ refill data. Put your showroom staff and delivery man on the job for booking and delivery to these customers,” said one message.

“Above negative growth in these three districts are of IOCL, ie of Kolkata AO (area office) ...,” the second message read.

A senior IOC official, however, denied any drop in demand. “It’s true that the growth has stagnated for the last few months in and around Calcutta compared with the districts. But I don’t think there is a drop in refills,” said the official.

The company had in July sent mails to the distributors in the city, informing them that several had registered negative growth in supplying refilled domestic LPG cylinders.

According to the distributors, many of whom said they had sent their employees and delivery personnel to homes where refill demands have gone down to find out the reason, there are several factors for the dip.

Many people who were staying on rent in Calcutta and surrounding areas, and working in private companies, shops, stores and other places, have lost their jobs following the Covid-related lockdown, which had brought business to a halt. Most of them have returned to their native places and, hence, are not booking refilled cylinders in the city.

Many others have had their incomes drastically reduced and cut down costs, including those incurred on cooking.

At many households cooks are not coming because they stay in suburbs and cannot commute to the city as train service has not yet resumed. Such families are either getting food from outside or cooking much less than their hired cooks used to, resulting in a slump in the LPG demand.

Another reason for the LPG demand taking a hit is that many students and others who stayed as paying guests in the city have returned home because of Covid. Their landlords now have to cook much less.

A homemaker at Jodhpur Park said their cooking gas consumption had gone down. “We are asking the cook to come every third day and she is cooking a dish that lasts three days. Earlier, she would come daily,” the homemaker said.

“So, our LPG requirement has gone down from one every two months to one every two-and-a-half months. In fact, for the period when the cook was sent on leave, a cylinder lasted for even a longer duration because we used to cook on low flame and were careful to switch off when the ingredients were not ready, which a cook usually does not do,” she said.

“There has been a sharp dip in refill orders for domestic LPG across Calcutta and the suburbs, which we think is a direct impact of Covid-19. This is in addition to the sharp dip in sales of commercial LPG cylinders because hotels and restaurants were closed for a long time. Many people are not ordering for refills at intervals which they would earlier do,” said Bijan Behari Biswas, president, Indane Distributors’ Association, West Bengal.

Biswas said many of those who are in the BPL category and have been given money in advance by the Centre to get three cylinders free because of the pandemic are not booking refills. “Many of these consumers have spent the money on other things. So they are yet to take all the three refills that they are entitled to,” said Biswas.

Sreema Indane Distributor in Garia has about 22,000 consumers. For the last five to six years, the agency had been supplying 14,000 to 14,500 refilled cylinders every month. Since July, the number has gone down to 11,000.

“We have asked many delivery personnel not to come to work because of the fewer orders,” said Sunil Baran Dey, proprietor of Sreema Indane Distributor. “People don’t have money in hand and are trying to cut costs as much as possible.”