Now, people aged 60 and above and those between 45 and 59 with comorbidities are eligible for vaccination 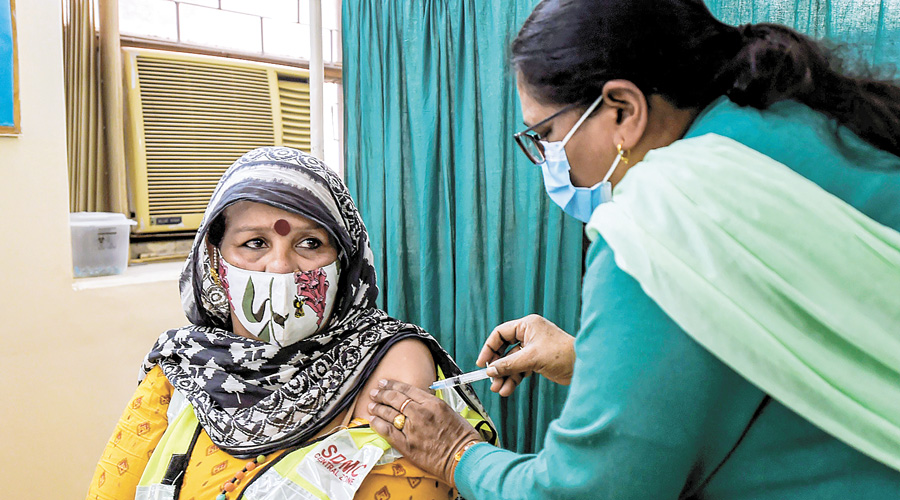 The Centre’s announcement that all those who are above 45 will be eligible for Covid shots from April 1 has changed the vaccination scene, officials of several hospitals said.
PTI
Sanjay Mandal, Kinsuk Basu   |   Calcutta   |   Published 27.03.21, 01:06 AM

Private hospitals who were looking for Covid-19 vaccine recipients till the other day to avoid wastage are now flooded with calls from people above 45 who are interested in taking the shots.

The Centre’s announcement that all those who are above 45 will be eligible for Covid shots from April 1 has changed the vaccination scene, officials of several hospitals said.

Now, people aged 60 and above and those between 45 and 59 with comorbidities are eligible for Covid vaccination.

One private hospital got around 250 calls on Friday, compared with barely 40 before. An official of another hospital said many people accompanying patients to the outpatient department are enquiring when they could book a slot for a Covid-19 jab.

A third hospital has received requests from corporate houses and banks that are keen on getting their employees vaccinated.

Public health experts have repeatedly called for vaccination of all adults to prevent a surge in Covid cases.

An official of a private hospital said the keenness and desperation among people between 45 and 59 to get vaccinated were not seen among others.

“Many people above 60 have medical conditions and are on medicines. We found many of them to be apprehensive about possible adverse reactions of vaccines. But once it was announced that anyone above 45 could get a Covid shot, the situation changed and we are flooded with requests for bookings,” said Sudipta Mitra, the chief executive of Peerless Hospital.

“There is a lot of enthusiasm, along with desperation. Many people above 45 who are coming to OPDs are asking hospital staff about vaccination timings and price. Most of them don’t have any serious medical conditions. They go out for work regularly and are keen to take the shot,” Mitra said.

Ripon Street resident Md Nadeem, 52, had called up the RN Tagore International Institute of Cardiac Sciences to inquire about vaccination.

“I work for a private company and have to go out every day. I am exposed to Covid infection much more than those staying indoors. So, I called up the hospital to know about the formalities and will take the vaccine in the first week of April,” said Nadeem.

“All senior citizens in our family have taken their first dose of a Covid vaccine. Now I want to take it,” said Garia resident Mukta Nandy, who was among those who have called up the RN Tagore hospital.

Officials at the hospital said they received around 250 calls on Friday from people asking about vaccination.

“When vaccination for the elderly had started, we were getting maximum 40 calls a day. But over the past two days, we have been getting around 250 calls and the number is increasing,” said R. Venkatesh, regional director, east, Narayana Health, of which the RN Tagore hospital is the flagship unit.

AMRI Hospitals have been getting 450 calls every day on their helpline from people above 45. At the Dhakuria unit, a PSU oil company and several banks have sent lists of employees for vaccination. “We are fixing the schedule for these people,” said an official of the hospital.

A health department official said around 3 crore people would have to be given doses post-April 1. This figure is nearly double the number of those who are now eligible for doses, including health-care personnel and frontline workers.

The health department has decided to increase the number of vaccination centres across Bengal. At a recent meeting, officials decided to put in place the cold chain mechanism at all new centres and deploy additional personnel in the next few days.

“We now have a little over 4,000 vaccination centres. This number will be increased significantly,” said a health department official.