3 markets in Ultadanga to be shut till Sunday

Move by CMC after surge in cases among stall owners 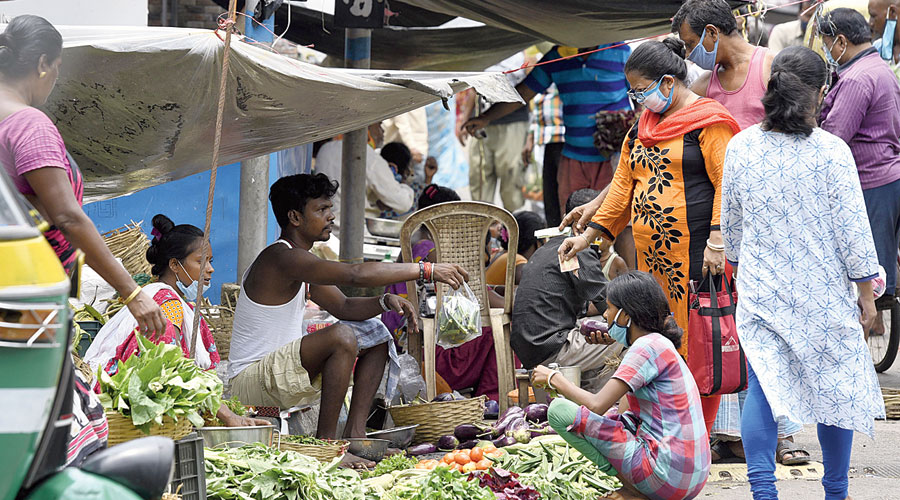 Three markets in the Ultadanga area — in Muchibazar, Kadapara and Joramandir — will remain shut till Sunday, the Calcutta Municipal Corporation has decided following a rise in the number of Covid-19 cases among stall owners.

The CMC has issued notices to the governing committees of the three markets informing them about the decision. The gates of all three markets were closed on Friday afternoon.

“At least 15 people have tested positive for Covid-19 over the past few days in Kadapara and Joramandir,” said a senior official of the civic body.

“We have decided that the gates of these three markets will be closed at noon from next week. They will open at 7am.”

Located along Ultadanga Main Road and surrounded by housing complexes, the Muchibazar market attracts hundreds of shoppers every day from nearby localities as well as from places such as Bagmari and Muraripukur.

Like several other Calcutta markets, the one at Muchibazar, too, has been witnessing a huge footfall in the morning.

“Eight stall owners in the Muchibazar market tested positive over the last few days. One of the test reports arrived on Friday. Twenty persons tested positive from Karbagan (adjoining the market in Ultadanga) recently. We need to close the market and two others and sanitise the area,” said Anindya Raut, the local ward coordinator and the outgoing chairman of the local borough.

Karbagan on Ultadanga Main Road is within a containment zone but residents said the tag had not prevented visitors from flocking the nearby markets in large numbers, in violation of physical distancing norms.

Senior officials of the health department said Karbagan on Ultadanga Main Road was among the two shanties in Calcutta — the other one is in Bhowanipore’s Bakul Bagan Row — where a number of Covid-19 cases have been detected.