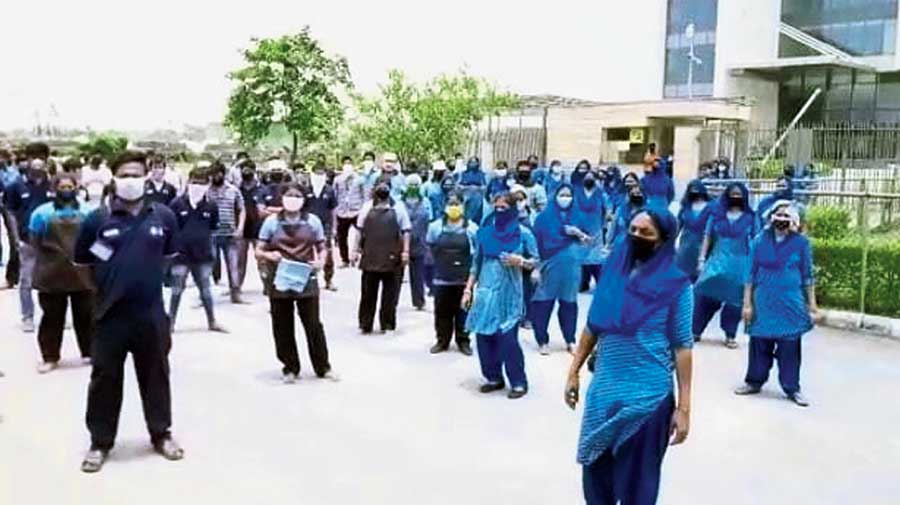 The ubiquitous security guard fraternity in the city is facing a crisis as most offices, housing complexes and commercial establishments have reduced their numbers as a cost-cutting measure to cope with the economic slump triggered by the pandemic.

In Sector V alone, more than a dozen big and small companies have halved the number of guards they used to hire as most have not reopened and employees are working from home.

In New Town, too, guards posted at a private college near Aliah University staged a demonstration after they were asked to stop reporting for duty.

At least two malls in the city have also reduced the number of guards.

Paritosh Jana lost his job as a guard a few days back. Jana, a resident of Gaighata in North 24-Parganas, said he used to work double shifts on most days and would take home a salary of Rs 12,000 for guarding a Sector V office.

“I was suddenly told by my agency that I did not need to go to work. They also stopped paying me and told me that the company where I was posted has stopped hiring guards. I have nothing to do now and have a family of four to feed,” said Jana.

“His employer asked him to stop driving his car a few days into the lockdown. I don’t know how we will survive. My husband is now selling vegetables from a cart,” said Sharmila, who stays in Garia.

Satnam Singh Ahluwalia, the state general secretary of the Central Association for Private Security Agency, said most establishments and housing complexes had reduced the number of security personnel by up to 50 per cent in the city.

According to Ahluwalia, the industry has never been “hit so bad” in recent memory. This despite the guards being on the frontline in the Covid battle - guards are playing the role of hygiene monitors, checking the body temperature of the people entering buildings or complexes with thermal scanners, and ensuring they are wearing masks and sanitising their hands.

“People are not only terminating contracts (with security agencies), some are refusing to pay up citing lack of business during the lockdown. We need help from the government to ensure the families of guards at least have food on their tables,” said Ahluwalia, who is also chairman and managing director of Kolkata Response Group, a security agency.

Debashis Sen, the chairman of Nabadiganta Industrial Township Authority (NDITA), which administers Sector V, said they would request all companies to have a humanitarian approach. “We will request the companies to try and save their jobs and look around for ways where they can be employed otherwise,” said Sen.

A managing director of an IT firm in Sector V said he had asked the security agency they are in contract with to deploy fewer guards at his office.

“As most of our employees are working from home... we don’t need as many guards as before at the office. There are now only four guards, earlier there would be around a dozen,” he said.

According to him, the company’s board was forced to take the decision as revenue generation was low and no new projects has landed up.