Violators to be warned thrice before shutting down store 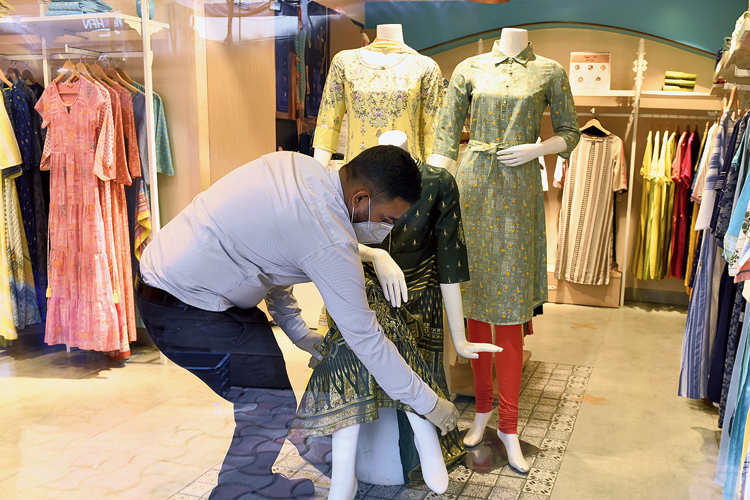 New Market or SS Hogg Market will open from Monday.

Traders have planned a host of measures to ensure all stores owners, employees and shoppers follow distancing rules and take necessary steps to keep the market safe.

Volunteers will act as watchmen in each of the 15 blocks of the old and new complexes of the market, a plan to shut down any shop found to be a repeat offender and keeping six of the 22 gates open to prevent overcrowding inside are among the measures the traders have planned to ensure safety.

One-third of the stores may still remain closed for the first few days as employees will not be able to reach the market till public transport is normal, a member of the market’s traders’ association said.

Only six gates in the old and new complexes of the market that have close to 1,000 stores will remain open. All store owners have been asked to ensure there is a minimum of 6ft distance between two people, be they employees or customers.

The traders association has told store owners that those found violating any rule will be warned thrice before shutting down the store.

“There are stores of various sizes in New Market. We have asked the owners of stores that are around 100sq ft to ensure there are not more than two people inside the store at any point of time. The owner of the store opposite has been asked to keep a watch,” Uday Kumar Shaw, the general secretary of SS Hogg Market Traders Association, said.

Three volunteers from among employees and store owners will be doing the rounds of each of the 12 blocks in the old and new complexes of the market. The volunteers will be on the lookout for violators.

After having lost business during Id and Bengali New Year’s Day, traders in New Market are banking on Durga Puja shopping. “We do not want to lose business for Durga Puja… for that we traders have to be very careful. If anyone from among employees of stores test positive for Covid-19, the entire market will be shut down for 21 days. We cannot afford that,” Shaw said.

Standalone shops in the New Market area are thinking of extending their business hours from Monday. Nasim Ahmed, the owner of Selection, a store near the crossing of Lindsay Street and Bertam Street that sells mobile phones and watches, said he planned to keep the store open for six-seven hours from Monday.

“I have been opening the store since Thursday. But with New Market opening from Monday, we are expecting more customers. I kept my shop open for three hours for the past few days… from Monday I want to keep my store open for 6-7 hours,” Ahmed said.

Treasure Island and Simpark Mall, though, will not open from Monday, Ahmed, who is also a member of the Joint Traders Forum, said.

The forum is an association of several market associations in the New Market area.