Calcutta assumes life of its own after night curfew sets in 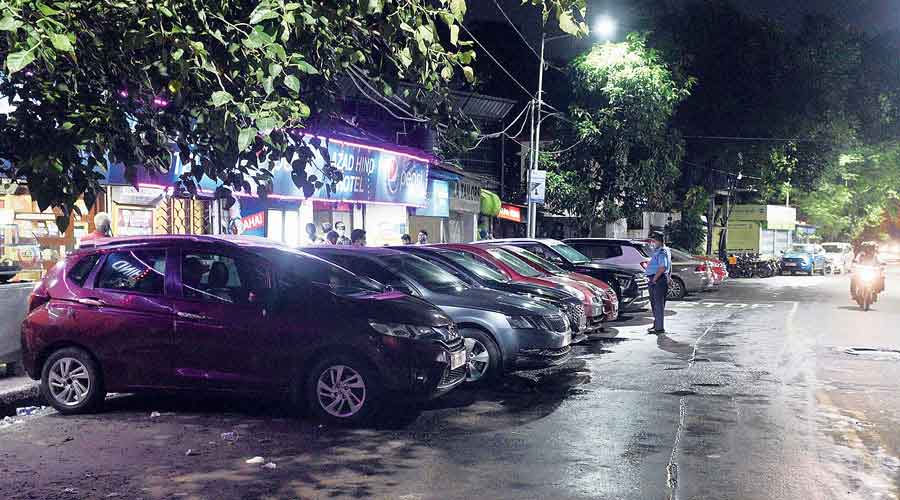 A slice of Calcutta assumes a life of its own after the night curfew sets in.

Ballygunge Circular Road, the leafy, upscale south Calcutta neighbourhood, has never been a stranger to a vibrant nightlife. Two dhabas on the road, which remain open through the night, have always drawn a sizable section of the city’s late-night revellers.

A tour of the road on two consecutive nights, Friday and Saturday, showed little has changed because of the 9pm-to-5am curfew.

A series of cars were still parked outside the two dhabas on both days. Waiters served food to the occupants of the cars. The dining area inside the eateries was also busy. All well beyond 9pm.

The party goes on till well into the morning. Many elderly residents complained they are woken up in the middle of the night by the vroom of the super cars. Some of them alleged racing. Earlier, the noise would merge with the sound of other passing vehicles. In the middle of a pandemic-forced night curfew, there is little else on the road and the noise seems louder.

Cars parked in front of the eatery opposite the Ballygunge Maidan army camp gate at 10:54pm on Friday night.
Pradip Sanyal

Late-night snippets from Ballygunge Circular Road, when a ban on any movement — barring those for medical emergencies and those of essential service providers — is in force across the city.

A dhaba right opposite the gate of the Ballygunge Maidan army camp was bustling with customers. At least 15 cars were parked outside the eatery.

A Mercedes S-Class pulled into a vacant spot, minutes after a Mahindra XUV 500 left.The aroma of kebabs, daal and hot butter-laced rotis filled the air. Most people were busy eating inside cars. The plates were sometimes kept on the bonnets and boots of the cars. Soft drinks and water bottles were kept on the roof.

Vehicles in front of the eatery next to the IAS officers' quarters at 10:51 pm on Saturday night.
Pradip Sanyal

A group of waiters was busy serving the occupants. Some other waiters waved expectantly at every car that passed by.

“Gari ke andar khaiye, bahar khaiye, restaurant mei baithke khaiye. Jidhar marzi khaiye. Raat bhar khula hai (You can eat inside the car or inside the restaurant. Whatever you like. We are open through the night),” a waiter said as our car stopped by.

A young group sat inside a Hyundai i10. A waiter served food inside the car and kept a jug of water on its roof. One occupant of the car reached out for the jug. But he was stopped by a woman seated next to him. The waiter was called again, this time for a bottle of packaged drinking water.

Customers served in cars in front of the eatery opposite the Ballygunge Maidan army camp gate at 11:42pm on Saturday night.
Pradip Sanyal

Every now and then, a two-wheeler of online food aggregators turned up at the eatery. Home delivery of food is allowed through the night.

Asked why food was being served to people after 9pm, a man sitting at the counter of the eatery said: “Yahaan to log raat ko hi aate hai (Most people come here at night)”.

At least a dozen cars were parked outside one of the eateries, right next to the quarters of IAS officers.

The waiters were busy doing the rounds between the kitchen and the cars. Every now and then, one of them was stepping out with a series of trays in both hands, walking briskly up to a car and serving the food.

Vehicles in front of the eatery next to the IAS officers' quarters at 10:58 pm on Saturday night.
Pradip Sanyal

The destination of the kebabs was a Toyota SUV. Inside, two glasses were kept on a seatback table. A man poured liquor from a bottle into one of the glasses, added water to it before taking a sip. Another man stood near the rear window, talking to the man inside.

Inside a Hyundai Creta a few metres away, a family of four were having dinner. A man sat at the wheels, a woman beside him and two children in the back. A waiter was rebuffed by the man for being late in bringing the food.

Customers served in cars in front of the eatery opposite the Ballygunge Maidan army camp gate at 12:18am.
Pradip Sanyal

“Bada gari hai na bahut, is liye hamare liye time nahi hai tere paas (There are a lot of fancy cars around. That is why you don’t have time for us),” the man barked.

The waiter had just delivered papads and salads to the occupants of a BMW 3 Series 330i Sport, which had come “long after” the Creta, according to the man.

The Telegraph had sought to know about the violation of the night curfew from police. “The eateries usually remain open for online orders. I was out last night to ensure the enforcement of the night curfew. We will act against violators,” said the officer-in-charge of Ballygunge police station.