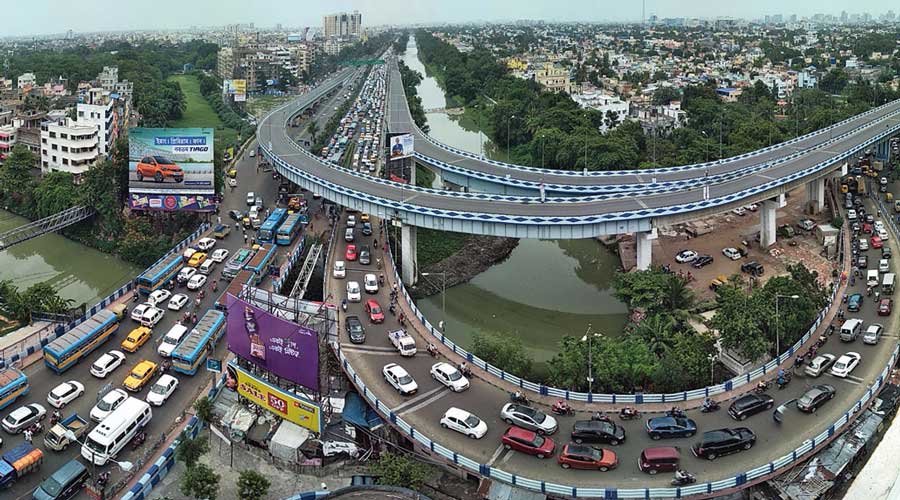 Both flanks of the concrete bridge on EM Bypass, connecting the two rotaries of Parama and Ruby, will be closed to traffic in phases beginning this week for load-bearing tests of the structure.

Engineers from the urban development department will carry out load tests aimed at finding out the structural stability of the bridge, which was built a little over three decades ago on EM Bypass.

The flank of the bridge — popularly known as Ambedkar Bridge —  that brings vehicles from Garia towards Ultadanga will remain shut till 6am of June 9, police said. From 8pm the next day —  June 10 — the other flank, which is used by vehicles to reach Ruby from Ultadanga end, would be shut to traffic. The closure will remain in force till 6am of June 14.

The police said vehicles would have to slow down and move down one of the flanks during during the period when each of the flanks of the bridge would be shut for the tests. Guardrails will be put up and officers would be posted to direct all vehicles to one of the flanks when the other remains shut, a senior officer in Lalbazar said.

“We will conduct two types of tests on the bridge — static and dynamic. The results will be collated and experts would analyse them to determine the structural stability of the bridge,” said a senior engineer of the urban development department.

In the static test, engineers would find out the horizontal pressure of wind that tries to push the bridge sideways while in the dynamic test, the aim would be to measure how the bridge oscillates in the impact of the vertical wind pressure.

The tests were necessary to find out whether the bridge needed thorough overhauling or cosmetic repairs to increase its lifespan.

“These tests will help us determine the type of maintenance work that needs to be carried out so that we can increase the life of the Ambedkar bridge to another 20-plus years,” said a member of the expert committee on bridges and flyovers that the state government has set up following the collapse of a portion of Majerhat bridge in 2018.