Advertisement
Home / West-bengal / Bolt from the blue: Eight swept away in flash flood

Bolt from the blue: Eight swept away in flash flood

At least 30 people, who were struck downstream, were rescued 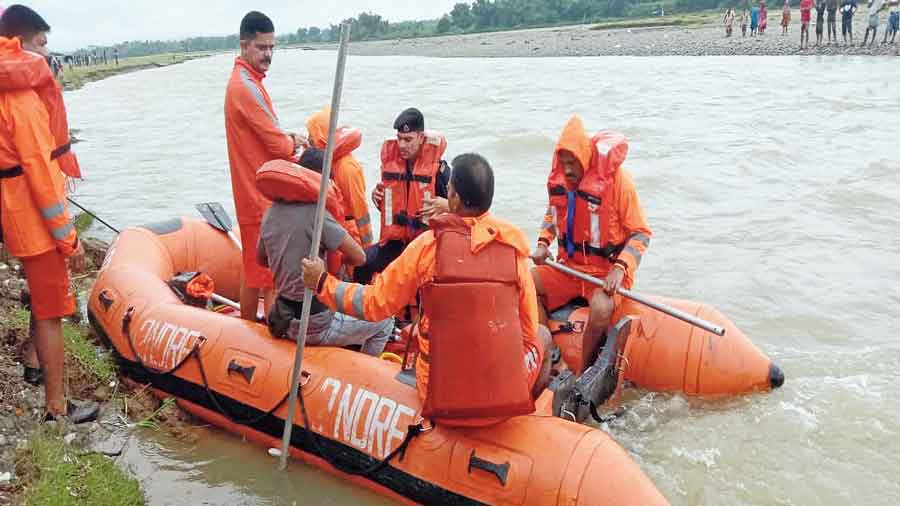 Eight people died and several others suffered injuries because of a flash flood in the Mal river when hundreds gathered for the immersion of Durga idols at Malbazar town in Jalpaiguri district on Wednesday night.

Sources in the local administration said the river’s water level had started rising around 8.30pm. Hundreds of people had gathered on the riverbank and on the dry river bed to watch the immersion of Durga idols on the occasion of Dashami.

“Eight people have died in the incident. We have rescued a number of persons and are still trying to find out whether anybody has gone missing,” said Debarshi Dutta, the superintendent of police of Jalpaiguri.

Teams of civil defence and NDRF personnel were engaged to carry out rescue operations. At least 30 people, who were struck downstream, were rescued. Every year, Durga idols of Malbazar town and the surrounding areas are immersed in the Mal river at a ghat in ward 2 of the town.

As the evening rolled on Wednesday, Puja organising committees and clubs started bringing their idols to the riverbank for immersion.

“Everybody was enjoying Dashami, the last day of the celebrations. Suddenly, the river swelled and within minutes, people standing on the dry river bed were in knee-deep water. Devotees who had moved into waist-deep water, especially the club members, were swept away as the water level rose above six feet or so.... While most of the people could make it to the riverbank, some were seen shouting helplessly while being swept away by the strong current of the river,” said Sujoy Dutta, an eyewitness.

He said announcements had been made that the water level was on the rise. However, those busy in immersions did not get the time to act.

All of them were the residents of Malbazar. Fifteen people were injured and 11 of them are under treatment at the Malbazar super-specialty hospital. Sources said the flash flood might have been caused by heavy rain in Bhutan from where the Mal originates.

“The search operations are still on. We have issued an alert across the district so that immersion of idols is carried out with utmost cautiousness. Our region is still having rainfall and there is a chance of a similar flash flood in rivers which originate from the hills in Bhutan,” said Moumita Godara Basu, the district magistrate of Jalpaiguri.

Local people said the water level had risen to such heights that a number of trucks and pick up vans which were used by the clubs to carry the idols had got stuck in the river. Prime Minister Narendra Modi and chief minister Mamata Banerjee expressed their condolences and announced compensation for the victims’ families. Both the central and state governments announced cash compensation of Rs 2 lakh each for the family members of the deceased and Rs 50,00 for the injured persons.

The BJP has alleged that the Malbazar municipality which is run by the Trinamul Congress has built an artificial embankment to block the river’s flow which led to the incident. Trinamul denied the charges.

State BJP president Sukanta Majumdar asked whether adequate arrangements had been made at the immersion ghat. Trinamul, on the other hand, accused the Opposition of politicising the accident.“It is unfortunate that instead of standing beside the affected people, these parties are indulging in politics for their own interests,” said Chandan Bhowmik, a senior Trinamul leader of Jalpaiguri.