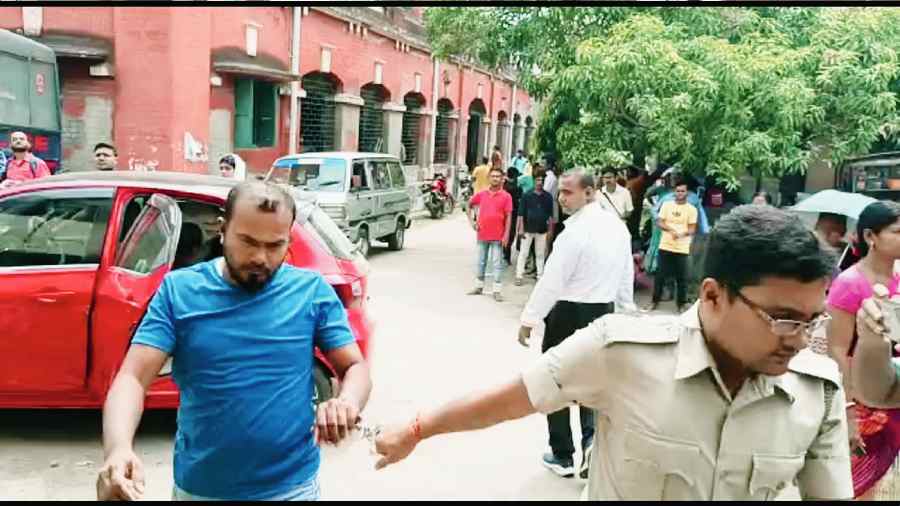 One person was killed and at least two injured when an explosion occurred at a kuchha house, where a stockpile of bombs was kept hidden, at Sandelerbil in Hingalganj, North 24Parganas, on Thursday night.

Police have arrested a Trinamul leader in connection with the explosion.

The police and local sources said some goons, allegedly owing allegiance to a local Trinamul leader, were manufacturing bombs when the explosion occurred and led to a series of blasts in and around the house.

The house where the explosion occurred is owned by Trinamul activist Afsar Gazi. The owner is a close aide to arrested party leader Iqbal Ahmed, who stays barely 50 meters away from where the explosion took place. The arrested leader is the husband of the party’s gram panchayat member Arufa Biwi.

The police have recovered the charred body of Ataur Seikh, 29, from the gutted house and arrested Iqbal for his suspected involvement in stocking and making bombs. He was produced in the ACJM court in Basirhat on Friday and remanded in 14 days’ police custody.

The Trinamul leader was arrested after local residents informed the police that they witnessed him helping the injured escape from the spot. Villagers identified at least one of the injured goons as Sujan Gazi, 30, who lost his right arm in the blast.

“We recently combed the area in search of bombs. But it appears that the goons had shifted the stock elsewhere and resumed making and stocking of bombs,” said a senior police officer of Basirhat police district.

Trouble began at around 8pm on Thursday when the first explosion occurred at a house located near a field at Dakshin Bankra village of Sandelerbil panchayat. But the explosion was followed by several explosions at small intervals in the house that led to a devastating fire creating panic in the locality.

“Initially we ignored it as most of the people in the area thought it as celebratory crackers going off. But a fire broke out at the house and proved us wrong. We rushed to the area but could not dare to advance further to douse the fire as blasts continued to take place. Later, we noticed some severely burnt persons fleeing from the house. We immediately informed the police,” a villager said.

Local sources accused Iqbal of being the kingpin behind the illegal bombmaking industry.

“He has developed an enmity with a local construction firm. For the past few days, we noticed the movement of suspected persons in the area but could not report it to the police for fear of Iqbal. We suspect he was preparing to attack people attached with the firm,” a villager said.

Trinamul’s Hingalganj block president Sahidulla Gazi said: “Goons have no place in the party. On earlier occasions we had told leaders about the criminal activities of Iqbal and his wife. But none paid any heed to the complaints.”