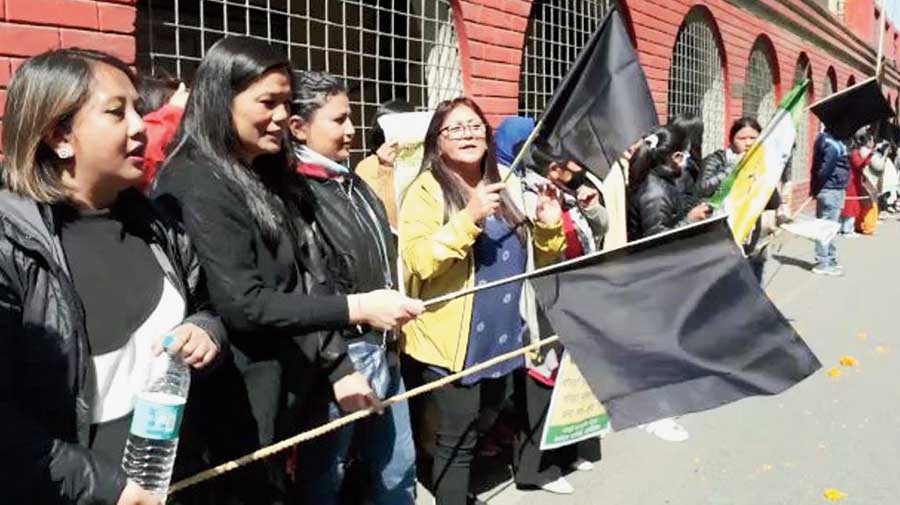 The BJP’s Parivatan Yatra in north Bengal, which had been flagged off from Cooch Behar by Union home minister Amit Shah, reached here on Tuesday amid protests not just by its rivals but even by two hill allies which accused the saffron party of not being serious about its promises.

Supporters of Bimal Gurung’s Gorkha Janmukti Morcha, which had been supporting the BJP for 13 years until recently, waved black flags at the yatra, while the Kalimpong Krishak Kalayan Sangatan — a federation of hill farmers — staged a dharna which was supported by an apolitical organisation representing 11 hill communities seeking tribal status.

If this was not enough, the Communist Party of Revolutionary Marxists (CPRM), which had backed the BJP in the last Lok Sabha election, refused to participate in the yatra and said its support was for fulfilment of hill demands and not for the saffron camp’s political programmes.

The turn of events on Tuesday, many believe, could be an indicator that the BJP might find it difficult to win over the voters in the hills unless their promises were translated into delivery.

The BJP’s two main promises are tribal status for the 11 communities and “a permanent political solution” for the hills.

“The promises remain only on paper... Time is running out,” said a source in the BJP admitting that the non-fulfilment of the promises would hit the party in the run up to the polls.

With the model code of conduct round the corner, the BJP is under pressure as the budget session will resume only on March 8. Once the MCC is in place, new announcements cannot be made for poll-bound states.

Gurung severed ties with the BJP in last October stating that the party was not interested in fulfilling the election promises.

On Tuesday, members of the Gorkha Janmukti Nari Morcha (Gurung camp) waved black flags at the yatra at Ghoom and near Darjeeling Railway station when the cavalcade entered the hill town. BJP state president Dilip Ghosh, state vice-president Arjun Singh and Darjeeling MP Raju Bista were present at the yatra.

While the women supporters raised slogans like “BJP go back” and “Raju Bista go back” in Darjeeling, members of the Kalimpong Krishak Kalyan Sangathan staged the dharna at Kalimpong to demand tribal status for the 11 hill communities before the Bengal elections.

The KKKS was also joined by apolitical United Indigenous Gorkha Community Forum in their one-day dharna.

“It would be good if the Parivartan Yatra had been held after fulfilling their promise,” said Bishnu Chettri, the president of the KKKS which had backed the BJP in the last general election.

CPRM office-secretary Sunil Rai said: “We supported the BJP for a permanent political solution…Today’s Parivartan Rally is their rally and we will not participate in it. Our parivartan (change) is not to carry the BJP’s flag.”

Darjeeling MP Raju Bista said the BJP was committed to fulfilling both the promises while admitting that hill people wanted the tribal status before the polls. “The 11 hill tribes’ demand can be fulfilled anytime (by the Union home minister). As far as the permanent political solution is concerned, it is not easy. It is something which will come through the (provisions of) the Constitution.”

Bista, however, said he would be here till 2024 and it was unwise to link the demands with elections.