Smriti had to divert to IAF base, reached Jhargram rally late and had to cancel Suri programme 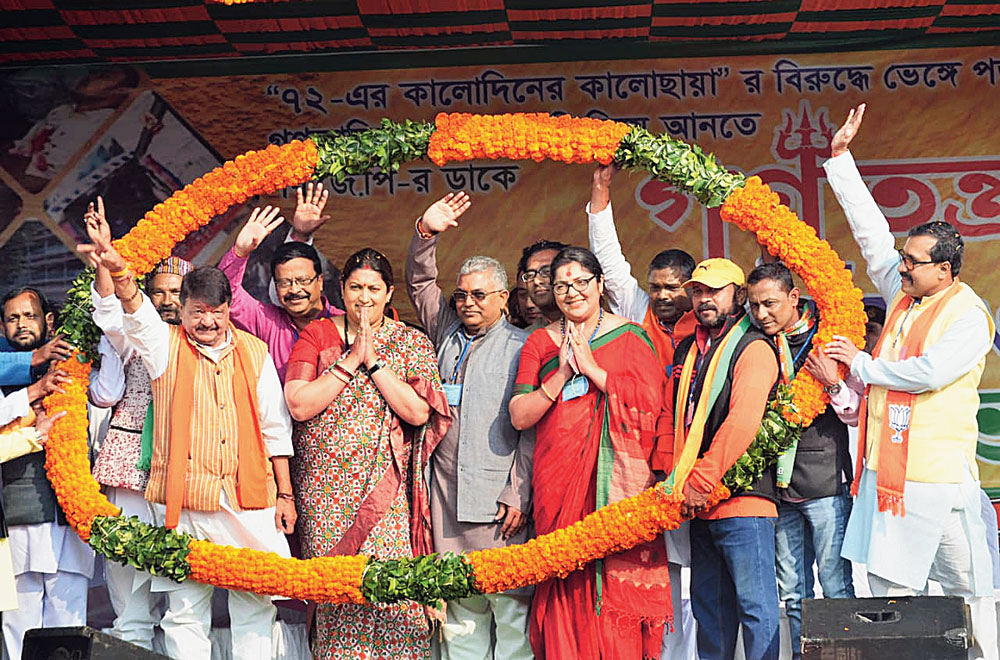 The BJP accused the Mamata Banerjee government of delaying till the “last minute” permission for Union minister Smriti Irani’s chopper to land in Jhargram for a rally on Wednesday and denying her time to make it to another gathering in Birbhum’s Suri.

BJP leaders protested against Jhargram DM Ayesha Rani, blaming her for the dilly-dallying. The official denied the allegations.

“At the last minute, Smriti was forced to land at the Kalaikunda Air Force Station and drive 50km to Jhargram. In the process, she got delayed and we were left with no option but to cancel her Suri meeting,” said BJP state general secretary Sayantan Basu.

According to Basu, the BJP had sought the clearance on January 19. “The DM delayed the whole process. So, we approached the defence ministry so that Smritiji’s chopper could land at Kalaikunda. She landed at 1.30pm and reached the venue at 2.20pm but got too delayed for her Suri meeting. The DM gave us permission at the very last minute.”

According to Basu, it was 4pm by the time Irani returned to Kalaikunda and the chopper had to fly back to Calcutta before sunset, forcing her to drop the Suri trip.

Jhargram BJP chief Sukumar Satpati said the clearance had come around 10am on Wednesday for the rally and 11.30am for the landing — too late for the 1pm event.

Denying any delay, DM Rani said “We had granted permission in the morning today (Wednesday).”

Satpati said the local authorities had earlier refused clearance for Jhargram Stadium and the helipad for BJP chief Amit Shah, who was to address the rally earlier. “We then finalised the Salboni Recreation Club Ground, 9km from Jhargram for (Irani’s) meeting and built a makeshift helipad.”