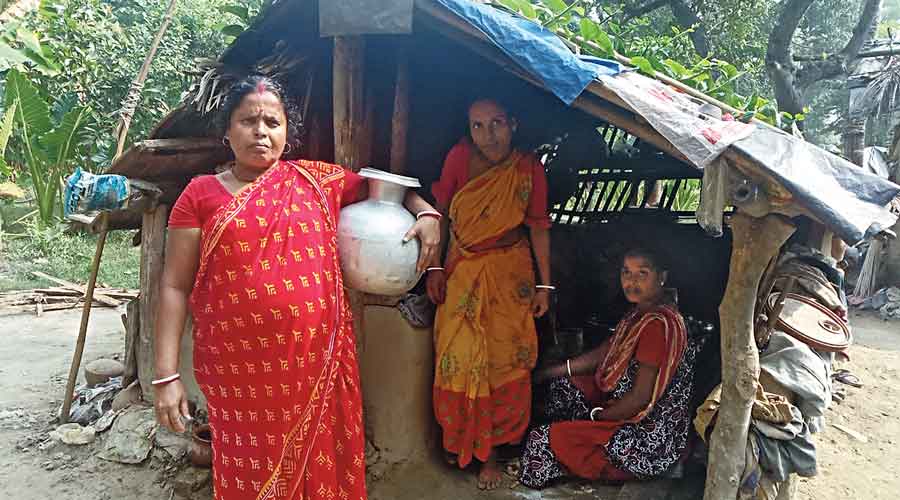 Members of the Mondal family in front of their shanty at Shibhati-Sangrampur village in Basirhat, North 24-Parganas, on Tuesday.
Pashupati Das
Subhasish Chaudhuri   |   Calcutta   |   Published 24.11.21, 02:25 AM

Members of a poor Rajbanshi family in North 24-Parganas, who hosted lunch for Union minister of state for home Nityanand Rai on January 4, accused the Bengal BJP of making false promises before the Assembly polls.

Brothers Joydeb Mondal and Kalipada Mondal, and their family members in Shibhati-Sangrampur village in Basirhat alleged the saffron party reneged on even a promise to help in the treatment of a young daughter of the house who cannot speak properly.

This comes close on the heels of a similar alleged breach of promise. Bankura villager Bibhishan Hansda, who hosted lunch for Union home minister Amit Shah on November 5 last year, accused the BJP of not delivering on its pre-poll promise of continuous medical aid for his diabetic daughter.

Such lunches in the run-up to the Assembly elections was part of the BJP’s social outreach events for the downtrodden communities of the state.

BJP supporters Joydeb and Kalipada got a chance to host one such lunch for Rai.

“The minister said a few words. The other leaders assured us of a good life, a home, job for our daughter and medical support to cure her speech problem. But the BJP lost the polls and since then no leader contacted us,” said Joydeb.

“We were most keen on medical aid for our 21-year-old daughter Priyanka, who has a vocal chord problem since childhood. She is an undergraduate” added the farm worker who earns Rs 6,000 a month.

Kalipada’s wife Champa Mondal said they cooked a lavish lunch by their standards for Rai, including paneer, dhoka and nolen gurer payesh. Priyanka added they survive on ration and support offered by the state government.

BJP’s Basirhat organising district president Tarak Ghosh refuted the charges. “It is a family of our party sympathisers... There was no promise in exchange of lunch. If anyone interprets it that way, it is unfortunate. None of the family members spoke to us about their problems. I will talk to them  soon,” Ghosh said.

Local Trinamul leader and panchayat pradhan Sanjoy Sarkar said: “The BJP tried to use the family to mobilise the support of tribal and downtrodden community voters in the area. But the poll results unveiled their ploy. As a party we don’t need to do anything special for them because there are state government-run welfare schemes that they get. We have only ensured that they get the benefits of all schemes they are eligible for.”