Adyanath Sarkar, 38, is a prominent face of the party’s youth wing in Nadia 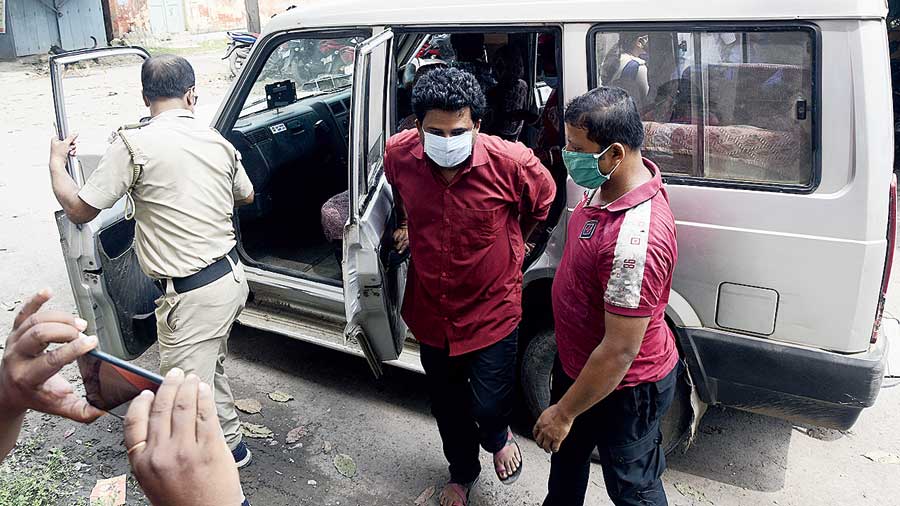 Police on Tuesday arrested the head of a BJP-ruled gram panchayat in Nadia’s Bhimpur for allegedly marrying a 16-year-old schoolgirl.

Adyanath Sarkar, 38, a prominent face of BJP’s youth wing in Nadia, was arrested from his home in Bhimpur’s Kulgachi on the outskirts of Krishnagar, 10 hours after the district child marriage prohibition officer of Nadia lodged  complaint against him with Bhimpur police for marrying the Class X student from Memari, East Burdwan.

The pradhan or head of a gram panchayat is by default the chairman of the local child protection committee.

An official of the state social welfare officer said: “This  is a bizarre act by a man who by the virtue of his position is assigned to protect minors.”

Adyanath, head of Poragacha gram panchayat, was charged under Section 9 of the Prohibition of Child Marriage Act, 2006, and produced before an additional district and sessions judge’s court in Krishnagar that remanded him to 14 days’ judicial custody.

The police recovered the girl from the BJP leader’s home and produced her before a court through the child welfare committee. She was later handed over to her parents.

The police also charged the priest of the temple under Section 10 of the Prohibition of Child Marriage Act, 2006, for solemnising the marriage of the minor girl. The priest is absconding. If found guilty, both the accused are liable to rigorous imprisonment extending up to two years and pay a fine up to Rs 1 lakh, a lawyer said.

A defiant Adyanath said on phone: “I found nothing wrong in marrying a teenager. Girls in rural areas are often married at that age.”

Local sources said Adyanath allegedly married the Class X student on September 9 at a temple in Nadia. Adyanath planned to throw a reception on September 25, said sources, and posted many pictures of his bride on his Facebook wall, prompting many to question the age of the girl.

Alerted, a Childline team, along with the police, recently visited the BJP leader's home and asked him to show his wife’s proof of age. An infuriated Adyanath abused the Childline officials and drove them out, said a member of the team.

Childline India Foundation is the nodal agency of the Union ministry of women and child development that manages and monitors the Childline 1098 service all over the country.

The team informed the district administration.

SDO, Krishnagar (Sadar) Manish Verma said: “We received a complaint from Childline and began an inquiry. We checked the Kanyashree database that corroborated her (the bride’s) age as 16. Eventually a police complaint was lodged.”