He announced his decision at a media conference in Darjeeling 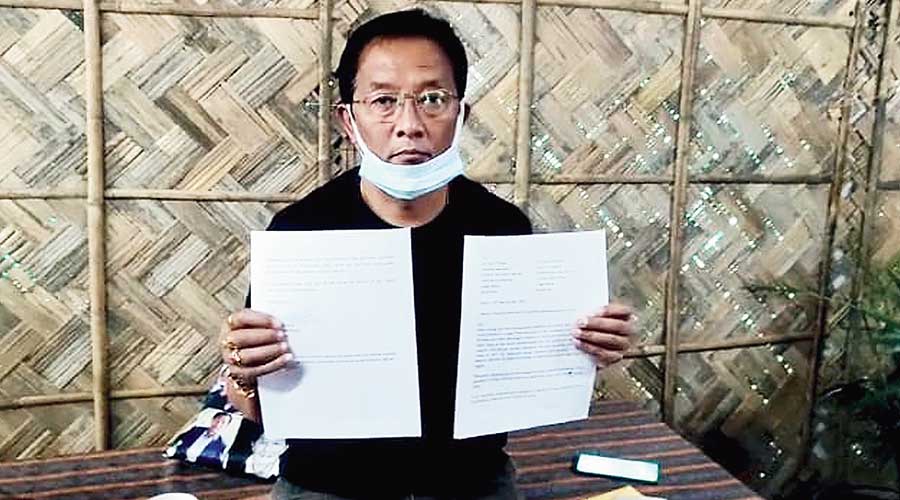 Binay Tamang with his resignation letter at his residence in Darjeeling on Thursday.
Telegraph picture
Vivek Chhetri   |   Darjeeling   |   Published 16.07.21, 01:03 AM

Binay Tamang on Thursday resigned from the Gorkha Janmukti Morcha faction he had formed in and headed since 2017, a decision that is likely to redraw political contours in the sharply divided hill politics.

Tamang announced his decision at a media conference in Darjeeling.

“I am resigning from the post of party president and also as an ordinary member of the Morcha,” Tamang said. He added that he would hand over the Morcha flag and forward a copy of his resignation letter to Bimal Gurung, the founder president of the Morcha, against whom Tamang had revolted four years back.

Tamang’s decision to forward the resignation letter to Gurung indicated that his growing difference with Anit Thapa, general secretary of his faction, was the prime reason behind his resignation.

Several Morcha leaders this correspondent spoke to said Thapa’s rise in importance within the party after he headed the Gorkhaland Territorial Administration — Tamang had resigned as the head of the GTA to contest the 2019 Darjeeling Assembly byelection — had sowed the seeds of factionalism.

Within an hour of the resignation announcement, Tamang was removed from the faction’s WhatsApp group, a clear indication that his decision was accepted by Thapa, who, however, termed the resignation as a “surprise”.

In the nearly 45-minute-long media address, Tamang cited a number of reasons for the resignation. At one point, he said he had sniffed a conspiracy since January 2019 to remove him from hill politics by “national forces” and abetted by people inside and outside his party.

However, in the resignation letter addressed to party vice-president Satish Pokhrel and Thapa, Tamang said it was his “moral responsibility to resign from the post of the president” following the electoral losses in 2019 and 2021.

In the last Bengal Assembly elections, the BJP and its allies had polled 39.2 per cent of the total votes cast in the hills followed by Binay Tamang faction of the Morcha which secured 32.9 per cent and Gurung’s faction that bagged 20.6 per cent.

Tamang also blamed some party leaders. “Most party functionaries are not serious in organisational matters and played a double standard role (during elections) leading to the loss,” wrote Tamang.

The Morcha leader, who decided to ally with the Trinamul Congress in 2017 when Gurung was with the BJP, said three “rumours” were being floated by his rivals.

“Rumours are being spread that I was in touch with the BJP. Some said I would join hands with Bimal Gurung while another theory was that I would join Trinamul,” said Tamang, who virtually ruled out all the three options.

Tamang said he had been in politics for 33 years, first with the GNLF till 1999, and then with the Morcha from 2007 onwards.

He added that he would start the “third chapter” of his political journey. “I will start the third chapter of my political career. But please don’t ask me the details right away. I will announce it at an appropriate time,” said Tamang.

Gurung didn’t waste any time in welcoming Tamang to his old party.

“Bhai (Binay Tamang) was among the six core leaders behind the formation of our party in 2007. In politics, there are no permanent friends and enemies. Our doors are always welcome (for him),” said Gurung.

Tamang justified his decision to hand over the flag to the “original owner (Gurung)” on the grounds that he had taken the decision to revolt against Gurung only to “save the party, people and the hills”.

“I will hand over the party flag to the original owner. I request Anit bhai and others not to address the faction as Binay faction anymore,” said Tamang.

In the recent polls, Calcutta High Court had allowed both the Morcha factions to use the words “Bimal faction” and “Binay faction”.

Tamang said his decision to hand over a copy of his resignation letter to Gurung was prompted by the court’s earlier verdict. “I will also inform Calcutta High Court about my resignation,” said Tamang.

Thapa said it was Tamang who had requested him in 2017 to start a new political culture to save the hills.

“I respect Binay Tamang and I will continue to follow his principles. I will work with the state government for the betterment of the hills,” said Thapa.

Thapa has decided to hold a meeting of the central committee in Kurseong on Friday to discuss the new political development.